Manchester United and Chelsea target Declan Rice reunited with an old schoolboy pal who was part of his star-studded youth on Thursday night.

Genk striker Ike Ugbo played alongside West Ham’s talisman for five years as part of a Chelsea youth team which is now a Premier League who’s who? 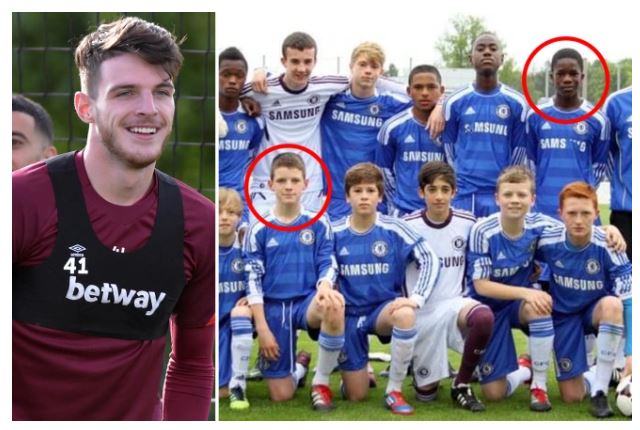 And Eddie Nketiah, now an Arsenal striker, kneels proudly next to gifted midfielder Mount in our old team shot of the Chelsea whizkids.

Ugbo quit Stamford Bridge this summer to test himself abroad and has scored twice in eight matches for the Belgians.

England midfielder Rice, 22, fought back from being ditched by Chelsea as a 14-year-old to become a massive figure for club and country.

Ugbo said: “If I had been released at that age, who knows what kind of mindset I would have had? It is a strange feeling, it can make or break you.

“Some players get released and you never hear about them again or you just hear from someone that they have stopped playing altogether.

“So to go on like Declan has and just push on, it makes them stronger.

“To be released at 14 or 15, it is not easy to bounce back. It must be such a hard thing to take. It highlights how everyone’s path is different, so you shouldn’t worry about what others are doing.

“As long as you take care of what you can and what is in your control, you will get there if you do your best. As long as you are doing what you need to, everyone will eventually meet up at the same level.”