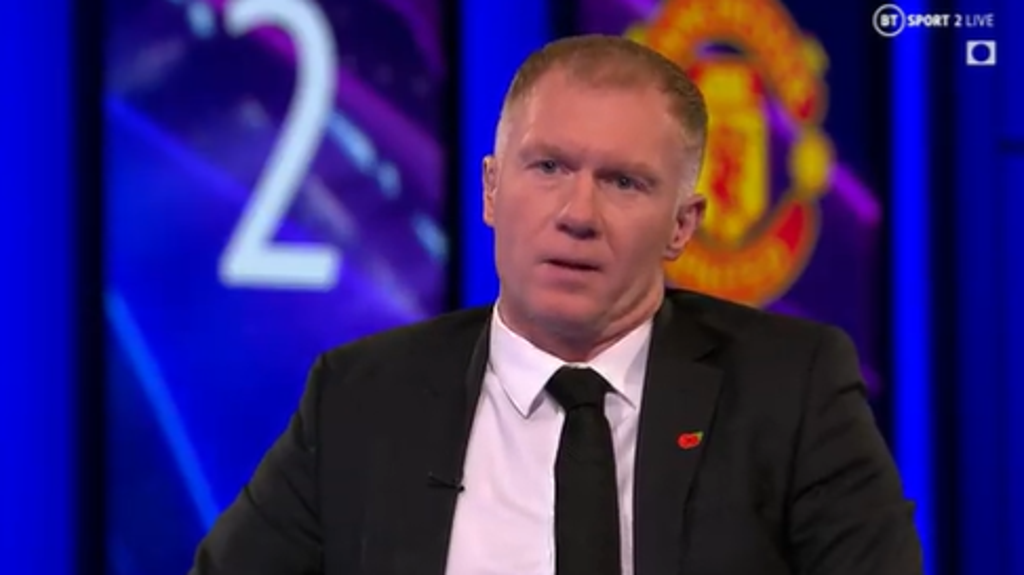 Manchester United’s “messy” performance in the 2-2 Champions League draw against Atalanta is a “worry” ahead of Saturday’s derby against Manchester City, Paul Scholes has warned.

Just two weeks after Cristiano Ronaldo scored a late header to beat Atalanta at Old Trafford, the Portuguese scored a crucial late equaliser in Bergamo as Ole Gunnar Solskjaer’s side salvaged a point.

Scholes voiced similar concerns despite Ronaldo’s late winner two weeks ago, only to be vindicated when United were thrashed 5-0 by Liverpool in the Premier League four days later.

And the former Manchester United midfielder urged further caution despite Ronaldo’s latest rescue act, ahead of the Manchester derby against Pep Guardiola’s side in the Premier League this weekend.

“Tonight again was a little bit messy,” Scholes told BT Sport after the 2-2 draw, which moved Solskjaer’s side top of the Group F standings.

“As soon as Raphael Varane went off [with a first-half injury] it just seemed to go all over the place again. Really shaky. Quality in the middle of the pitch wasn’t great. They kept giving the ball away.

“[Harry] Maguire, I don’t know if he’s still injured or if it’s a hangover from the Euros but he just doesn’t look right.

“I don’t want to say it again but with a performance like that, second half especially, and with no Varane on Saturday, it has to be a slight worry.

“Manchester City will think they have a good chance of winning. They think like that anyway – they are a brilliant football team and have brilliant players.

“Whether United have Varane or not, it’s always going to be a difficult game. Now, I think it makes it more difficult. United still have the quality to score goals and even in the games they haven’t played well, they’ve still created chances. Even the Liverpool game they had three clear chances.

“United have to defend properly – concentration is key against City. The second half was a mess.”

Former United defender Rio Ferdinand agreed with Scholes and warned that United could end up on the receiving end of another thrashing if they produce a similar performance against the Premier League champions.

“They can’t have that second-half performance on Saturday,” Ferdinand added. “If they play like that against City they get slapped three, four, five again, because that shows a real lack of respect for the opposition, being that open and fragmented, slack and sloppy with and without the ball.

“We looked at it at times and we couldn’t work out what formation they were playing. They were in disarray and again it comes down to a moment of brilliance from an individual, Cristiano Ronaldo. He saved them in the second half.”