Crystal Palace boss Patrick Vieira believes exciting attacking trio of Wilfried Zaha, Ebere Eze and Michael Olise are good enough at ‘the other side of the game’ to all start together

Patrick Vieira believes attackers Wilfried Zaha, Ebere Eze and Michael Olise are capable of satisfying his defensive demands allowing him to field them together more often.

For the first time in the Premier League this season, Vieira was able to start the exciting trio together in Crystal Palace’s 1-0 win against Watford.

There were glimpses of them combining as a three and also producing eye-catching moments individually throughout with Zaha scoring the first-half penalty that won the game. 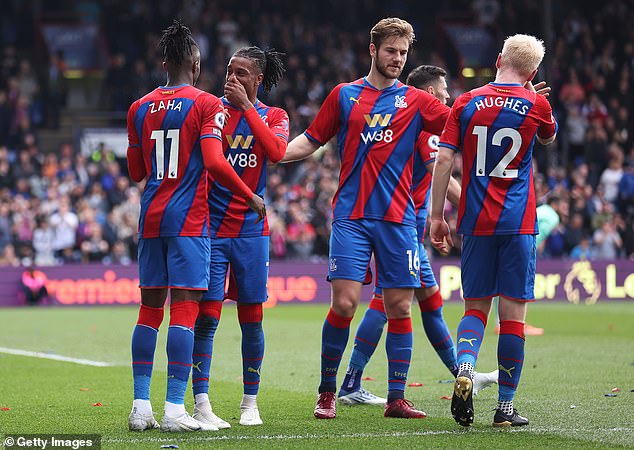 Wilfried Zaha, Michael Olise (left) and Ebere Eze all started together in the win over Watford

Olise won it after his header, from Eze’s cross, hit the hand of Watford left-back Hassane Kamara.

While there is no doubt about their quality going forward Vieira highlighted the importance of the work that will be required in the other direction if they are to all play together more regularly.

He said: ‘I wanted to do it [start them] more often. Obviously with Ebs’s injuries and Michael’s injuries, we haven’t managed to do it.

‘There is no doubt about the potential that they have. But there is the other side of the game that they need to do. If they manage to do that then, we can think about playing that three more often. If not, it will be really difficult because we need to have the right balance to compete. That is one of the areas we need to improve as well. 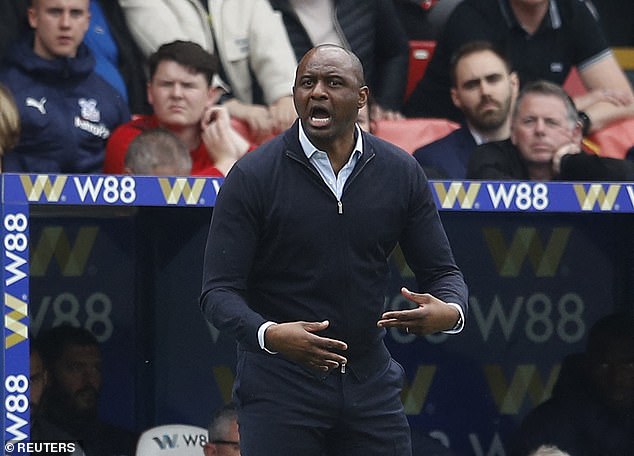 ‘We saw that Wilfried is capable of doing it. Michael needs to improve on that side. Ebs showed today that he is capable of doing it as well. So we have to be consistent on that kind of performance. If they do that, of course, the talent will give me really good options to play those three.’

The 29 year-old said: ‘It just shows what the club has in store. Mikey (Olise) is 20. That is how good he is already, so imagine what he will be when he matures into a grown player. He will be unbelievable.

‘It is nice that I can be part of it and play with these young lads. I feel like I am the oldest with all these young kids.’ 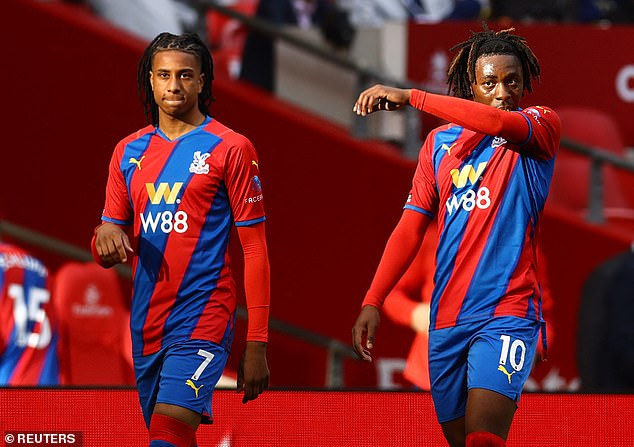 As he has developed Zaha has become more of a goal scorer, hitting double figures in three of his last four league seasons and his tally of 13 this term being his best-ever Premier League goal return.

Palace should have won more comfortably against Watford who ended with 10 men and Zaha has been impressing on his younger teammates the need to be more ruthless.

‘That comes with maturity and experience and killing games. I had to learn that,’ he said.

‘With the talent they have, you enjoy just doing tricks and running rings around people but at the end of the day it is about scoring goals. That is what I try to tell them out on the pitch, just play with purpose. All the rest comes after.’