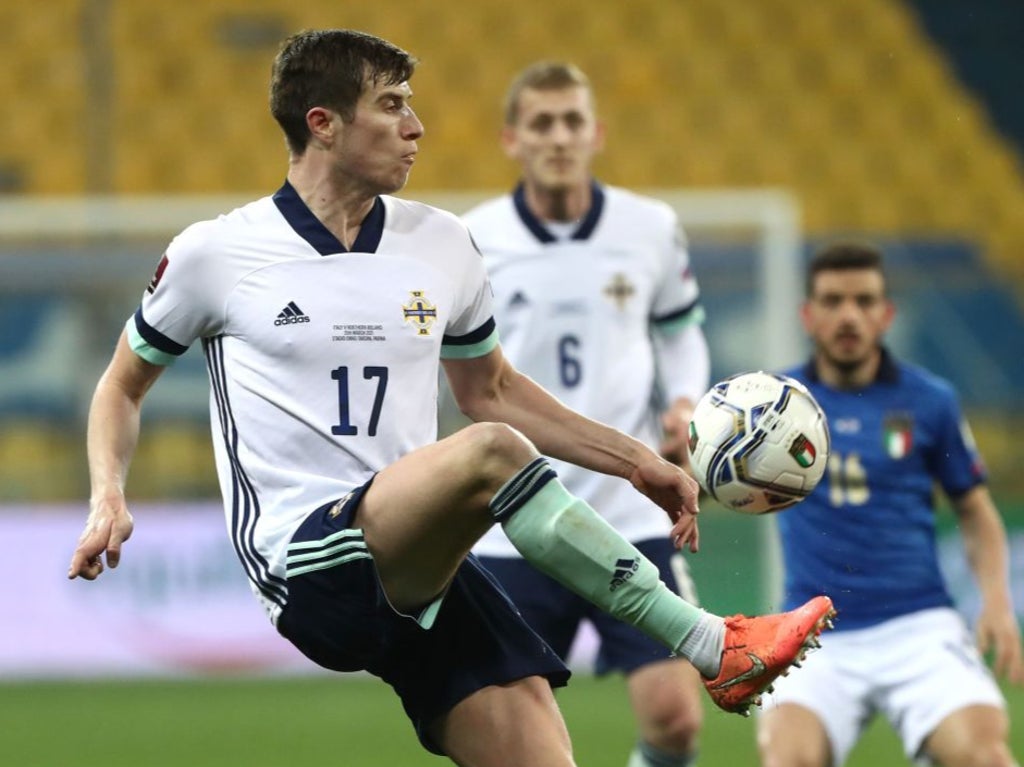 The Middlesbrough man seems certain to start against Switzerland in Geneva on Saturday, and tradition suggests he will do so as captain as he reaches the milestone six and a half years after his debut came in a friendly defeat to Scotland.

“Everyone always says how quickly your career passes by and it definitely does,” McNair said.

“I’ve been in the squad for seven years so it’s madness.

“I remember my first cap really well. I’m only 26 so I feel like my best years are ahead of me in a Northern Ireland shirt.”

McNair got to experience the highs of international football early in his career when Northern Ireland secured their place at Euro 2016 six months after he made his debut – with the decisive match against Greece the first time he had ever played at Windsor Park in any fixture.

Asked what the low point was, McNair pointed to the 3-1 defeat to Holland in October 2019, when the Dutch scored three times in the last 10 minutes to come from behind and take a crucial Euro 2020 qualifying win.

That was as close as Northern Ireland have been to taking a major scalp in recent seasons, but they could certainly use one on Saturday, a pivotal fixture in Group C as Northern Ireland start the night three points behind the Swiss in the battle for second place and a play-off berth.

“If we don’t come away with something from the Switzerland game it’s going to be very difficult to progress,” McNair said. “It’s a big game and we’re all looking forward to it.

“We’ve won three of the last four games and I feel like we’re playing well.

“We’re looking forward to these two games…they are going to be tough, but we believe we can go out there and get the maximum points.”

Northern Ireland will head straight from Geneva to Sofia to face Bulgaria on Tuesday night, with resources once again stretched after several players were forced to pull out.

Corry Evans has joined Shayne Lavery, Trevor Carson, Michael Smith, Ali McCann and Gavin Whyte in withdrawing, while his elder brother Jonny Evans is a major doubt with the Leicester defender yet to join up with his team-mates before they travel to Switzerland on Thursday.

Northern Ireland proved last month they could perform despite missing key players and will need to do so again, but McNair’s availability will be a plus after he missed last month’s goalless draw with the Swiss due to suspension.

McNair was banned after picking up a yellow card in the 4-1 qualifying win over Lithuania, deemed guilty of tripping Justas Lasickas in the box, though Bailey Peacock-Farrell saved the resulting penalty to preserve Northern Ireland’s lead.

“If I’d done that in the Championship I don’t think it would have been a penalty,” McNair said of the incident.

“After the match I watched it, slowed it right down, and his foot actually comes across, he knows I’m coming and he sort of tackles me, in a way. It was a bit harsh to be a penalty, but at the same time I can see why it was given, he was clever.

“The lad actually said to me after the match that he put his foot there because he knew I was coming. It’s frustrating.”