“It was something that I knew about but I wasn’t really interested in until I got older and had my own bank account,” Thibodeaux recalled. “I was able to think of different ways that I can make my money for myself.”

When the Oregon defensive end isn’t beating offensive linemen off the edge or sacking opposing quarterbacks, he focuses on his eclectic non-football endeavors. 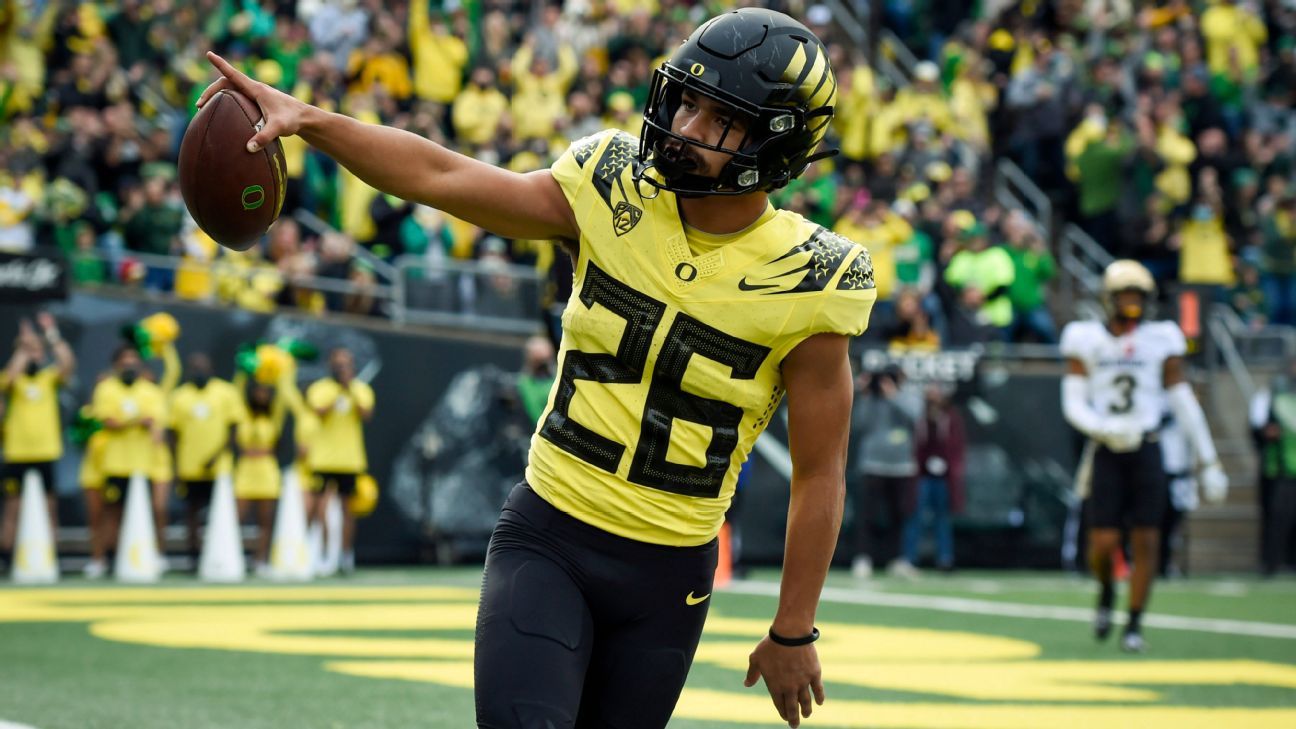 How will the playoff committee rank Alabama, Ohio State and other one-loss teams?Read now

For starters, education. He entered Oregon with a 3.8 GPA from high school. On this day, he’s in between finishing practice before the Ducks take on their next opponent and attending classes.

“I’ve always been a future-forward person,” Thibodeaux said. “Working for yourself is what I’ve always wanted to do. Cryptocurrency seemed like the best place with the exponential growth that it has.”

There are nearly six months until the 2022 NFL draft, and several mock rankings have Thibodeaux as the consensus No. 1 pick. On the field, his speed and physicality make him the premier edge rusher in the 2022 draft class for the No. 4-ranked Ducks. Away from football, a cerebral intellect. His Twitter and Instagram bios consist of insightful quotes: “Be Somebody to Somebody” and “Never Change. Just Grow.” They speak to Thibodeaux’s desire to make a positive impact while never losing sight of his morals and values. Through football, Thibodeaux wants to pursue ventures that give back to his family and where he came from.

Always focused on the future

Collins is the current head football coach of Oaks Christian School based in Westlake Village, California. He played professionally in the Canadian Football League before transitioning to coaching. Known as “Coach C,” he coached in the NFL as a wide receiver coach (San Francisco 49ers, Cincinnati Bengals), at a community college and now high school. He worked with Chad “Ochocinco” Johnson and 16-year pro Steve Smith at Santa Monica Community College.

After taking the head coach job at Oaks Christian in 2018, Collins developed a track record for successfully developing football players and putting them in position to secure college scholarships. When Thibodeaux transferred from Susan Miller Dorsey High School in the Crenshaw District of Los Angeles to Oaks Christian in Westlake Village, the teenager forged a bond with Collins.

“Both of us being from South Central Los Angeles, we’ve always had that connection,” Collins said.

For Thibodeaux, football wasn’t just something that came naturally to him. It provided a gateway to a life that differed from many individuals he grew up with. His focus is away from the streets and toward accumulating financial wealth for himself so he can look after his family.

Going to Oaks Christian and immersing himself in a school culture that contrasted with South Los Angeles opened Thibodeaux to new opportunities. Collins said there was a cultural change for Thibodeaux, moving from Los Angeles to Westlake Village. But Thibodeaux grew, balancing football with his academic interests.

“Kayvon comes from a community similar to where I was, you know, there’s not a lot of opportunities around the area,” Collins said. “For Kayvon to take the leap of faith in coming to Westlake — immersing himself with different coaches, meeting different people — it was in his wheelhouse because he’s a people person. He knew if he didn’t leave his home, he wouldn’t have the same success as he has now.”

While away from the football field or in between classes, Thibodeaux spent countless hours in Collins’ office.

The two chatted. Commiserated about football. Spoke candidly about their roots, history and life. These conversations demonstrated Thibodeaux wasn’t a typical football player. 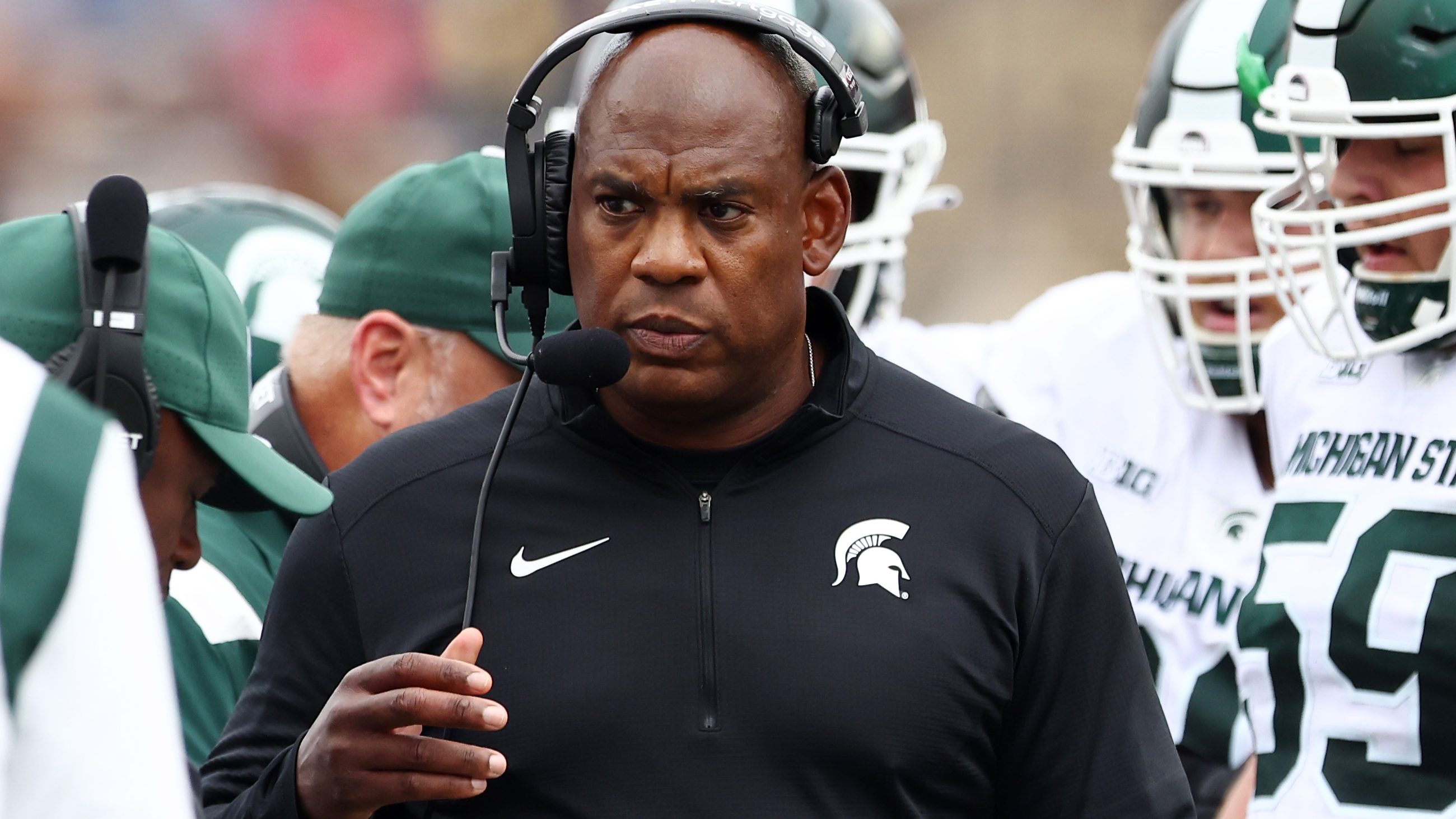 “The acclimation process was constant,” Collins said. “He wanted to not just be perceived as a football player. He loves to read. He’s a historian. He wants to know about everything. If you told K.T. something, he would look it up and get further information.”

Thibodeaux’s devotion to football stood out to Collins. The young defensive end spent many hours in the gym and after practices working on his craft. According to Collins, Thibodeaux reminds him of former All-Pro defensive end Julius Peppers. The tireless work ethic, the willingness to improve, the passion for every practice and game made the whole team want to emulate Thibodeaux’s habits.

“K.T. and I have a grinding approach to football,” Collins said. “Getting after it is a prerequisite. Our slogan was, ‘Hard, fast and physical.’ That approach rubbed off on the rest of the team.”

Thibodeaux wasn’t one to talk much before games in the locker room. When it was time to go on the field, Thibodeaux and Collins locked eyes. According to Collins, it was their signal that Thibodeaux knew as “good time.” The bigger games saw Thibodeaux go into attack mode on defense. When Oaks Christian played rival Calabasas on the road for the high school game of the week broadcast on local television, Thibodeaux recorded five tackles (four solo, one sack). Oaks Christian defeated Calabasas 21-13 and Collins says that was the game that secured Thibodeaux high school player of the year honors.

Success on and off the field

One conversation with Thibodeaux stands out from the rest, according to Collins. When it came time to decide on a college football program to pursue, Thibodeaux sought Collins’ advice.

The teenager attracted attention thanks to his superb play as a defensive lineman. Earning USA Today High School Defensive Player of the Year honors as a senior, Thibodeaux ranked first in the 2019 recruiting class. Alabama and Oregon made serious offers.

The two schools could not be more different. Alabama prides itself on its numerous championships, reigning as the dominant program in college football. Oregon, which is in the Pac-12, has made only two national championship appearances since 2000.

Both programs would give Thibodeaux chances to grow as a player. But Collins wanted his student to attend a university where he could receive a high-quality education while shining on the football field.

“I was always a sounding board,” Collins said. “Kayvon trusted me that I had no interest other than making sure he ended up in the best situation and the best program that would allow him to get to the endgame.”

Getting to the endgame meant Thibodeaux decided to go to Oregon. The decision paid off. The attributes that he showcased at Oaks Christian apply today at Oregon. Thibodeaux won Pac-12 Defensive Freshman of the Year in 2019. During the shortened 2020 season, he earned all-conference and MVP honors in the Pac-12 championship game, where he recorded three solo tackles and one sack.

“The cornerstone of our defense is Kayvon coming off the edge and being productive with his play,” said Oregon co-defensive coordinator Joe Salave’a. “Those things don’t happen on their own. You have to prepare before the game. He’s going to have the opportunity to continue to grow and develop into the dominant force he’s going to be.”

Besides the on-field accomplishments, Thibodeaux exhibits leadership qualities with his teammates. The best example was when the Ducks took on Ohio State in Columbus earlier this season. Thibodeaux did not play because he was recovering from a sprained ankle. However, the defensive end was on the sideline cheering on his teammates. When big plays occurred, Thibodeaux’s passion for the game showed, motivating his teammates.

The Ducks defeated the Buckeyes 35-28. Thibodeaux did not play a single snap on the field but contributed to the victory.

“Everybody knows he’s the No. 1 pick in the draft,” said Thibodeaux’s defensive line teammate Brandon Dorlus. “He’s never satisfied and is always looking to get better.”

“He’s a coach and a player as well,” said Oregon defensive tackle Keyon Ware-Hudson, who went to football camps with Thibodeaux in high school. “He’s a leader who brings up guys who are looking up to him.”

As the season progresses, the spotlight will grow brighter. Higher-stakes games provide evidence of what he might do as a future pro. Look no further than Oregon’s game against the California Golden Bears on Oct. 15, which the Ducks won 24-17. Thibodeaux missed the first half following a targeting penalty during the Stanford game on Oct. 2. He told Dorlus that he’d get a sack once he reentered the game in the second half. Not only did he get a sack, but posted five total tackles.

The conversation about Thibodeaux’s high draft ranking will continue until April 28, when his name gets called in Las Vegas. For Thibodeaux, it’s all part of the journey to a larger goal: Besides running past NFL offensive lines or to sack pro quarterbacks, he’s seeking the opportunities that are unlocked once he reaches the NFL.

Whether it’s through his NFT or cryptocurrency ventures or giving back to his community, Thibodeaux will make an impact on and off the field. He knows once he reaches the NFL that he’s back at the bottom of the ladder. His hard work on the field will lead to opportunities beyond football, where he can reshape the community that forged who he is as a player and person.

“For so many kids, football seems like a yellow brick road,” Thibodeaux said. “For me, that’s what it was. But now I want to create a stem from that and use this platform to show people that there are other yellow brick roads than football. You got to find the one that works for you.”