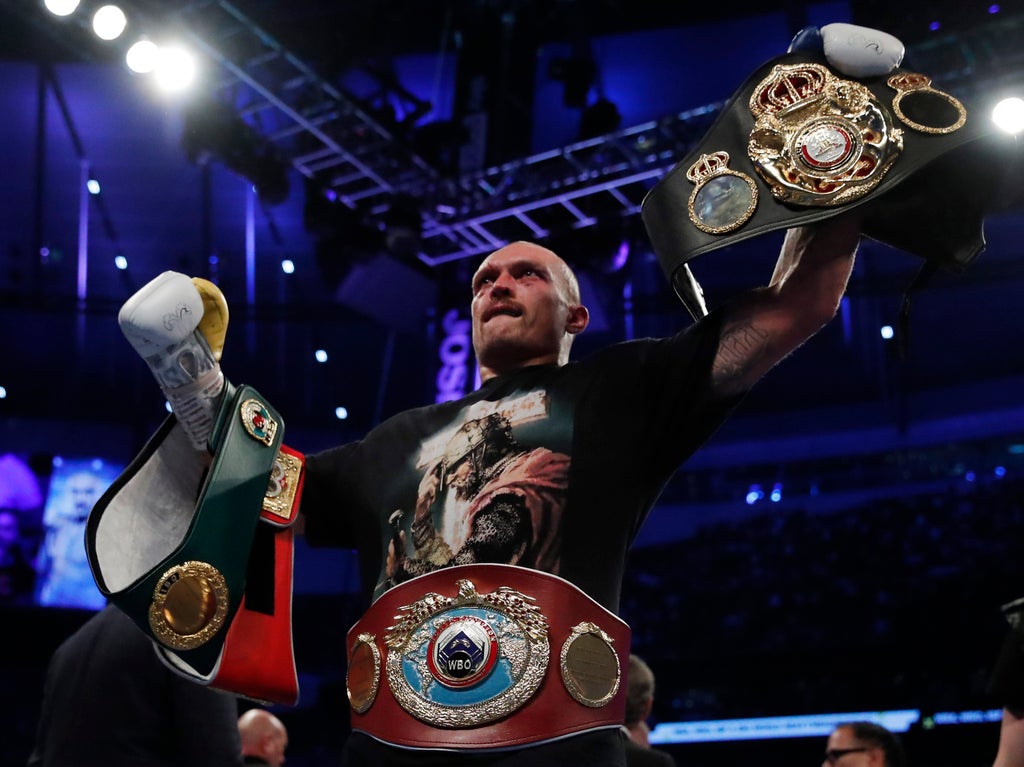 Just over a month has passed since Oleksandr Usyk systematically dismantled Anthony Joshua over 12 rounds in London.

Just over a month has passed since the undefeated Ukrainian repeatedly prised his way through Joshua’s flimsy defence and, in doing so, prised the Briton’s heavyweight titles from him with a unanimous-decision victory.

Many have analysed the bout to determine just how Usyk did it, not least Joshua himself. Was it the speed of the former undisputed cruiserweight champion? The fluency of his lateral movement? His tricky southpaw entries and exits?

Usyk has a wholly different answer.

“My belief in everything I do,” the 34-year-old tells The Independent.

If that is the case, then it’s even harder to imagine how Joshua might reverse the result of his first meeting with Usyk, when the pair square off again next year.

Joshua has triggered his rematch clause as he looks to avenge the second defeat of his professional career, and Usyk confirms that their second meeting will likely go ahead in spring 2022.

“The rematch is going to happen,” he says via Zoom from the back seat of a swish SUV. “The promoters are going to deal with the dates and everything. The nearest it will be is spring, or close to that.”

In fact, such a stark difference in technical abilities between Usyk and Joshua at Tottenham Hotspur Stadium led many fans and pundits to argue that the Briton should never have tried to outbox his opponent; that “AJ” should instead have made the fight ugly.

In his efforts to overturn the result from their first encounter, Joshua has travelled to America to try to identify coaches that might be able to alter his approach and bring out the “dog” in the 32-year-old.

But what does Usyk make of this? Was Joshua’s gameplan misguided under trainer Rob McCracken in September? Can the solution to the puzzle posed by Usyk be found in the United States?

“I don’t think about my opponents or their changes,” Usyk deadpans. “I think about myself and how I can become at least a little bit better every day.”

If the Ukrainian’s answers so far seem dismissive, then they are in keeping with the view that many British fans have of Usyk – that he is as cold outside of the ring as he is in it.

Yet the Ukrainian was often seen flashing grins during his most recent fight week, and he does the same throughout our conversation.

For there is a more playful side to Usyk, a colourful streak to his personality that seeped into his vibrant suits in the days before his clash with Joshua – and particularly into his space-themed walkout costume, which featured a reflective helmet that brought a sci-fi villain aura to the southpaw’s entrance.

For a man whose boxing is as controlled and calculated as it is, it comes as little surprise that Usyk played a major role in the design of the costume.

“Everything that happens in my life, I take part in – I’m an active participant,” he explains. “I don’t let anything slide without my attention.

“For example, one of the supportive aspects in the fight with AJ for me was a unique walkout uniform. It was developed with JAXET, they implement technology into their designs to create the gear of the future. Every single detail in my look for my entrance, from top to bottom, was worked on by me and the team.

“I come with a concept, a desire in myself, and my team does perfect work bringing that to life. We collaborated extensively on the designs of the vest, shorts and shoes. I really appreciate them doing it, because it’s not about business; it’s about teamwork and support, it’s important to me on a human level.”

Ironically, Usyk looked distinctly inhuman during his walkout, and his attacks seemed similarly alien to Joshua, who frequently froze as his opponent coolly closed the distance to land punches.

In the final round, Usyk quite literally had Joshua on the ropes, almost finishing the champion with seconds left in the fight.

There was little doubt inside Tottenham Hotspur Stadium: Usyk had done enough. More than enough.

Moments later, his hand was raised as his face contorted to keep the tears in. Usyk was embraced by his promoter Alexander Krassyuk, and his newly acquired title belts were draped over his shoulder and wrapped around his waist as Joshua fans watched on glumly.

“This was genuinely very emotional,” Usyk says, eyes widening. “The emotions were very high, the sort you have to live through to understand.

“I had felt amazing backstage, I enjoyed the walk to the ring… and even when I saw the crowd cheering, it didn’t matter if it was pro-Joshua or not.

“The night was a perfect ensemble of everything that happened that day.”

The performance was also perfect, the former cruiserweight champion comfortable as could be as he was crowned atop a new division.

Although Usyk’s victory over Joshua marked the culmination of his boxing career so far, it might not mark the climax.

Having spoiled Joshua’s chances of a unification bout with WBC heavyweight champion Tyson Fury next year, Usyk is now in prime position to take on the undefeated “Gypsy King”.

Of course, the Ukrainian must overcome Joshua once more to set himself up for such a monumental meeting, and, even then, Usyk might just find a fight against boxing’s politics tougher than any in-ring encounter.

But, should a contest with Fury come to fruition, it would represent a challenge that the new champion would unsurprisingly relish.

“Of course, it’s not always good to think about another opponent when you have a fight lined up,” Usyk says, “but what I like about Fury is his boxing competence.

“Stylistically, he’s very technical. He’s educated in the ring. I think it would be a good fight, I’d have to bring my best game.”

Usyk and Fury might just be evenly matched when it comes to the most technical elements of the sweet science. If they are to square off in the squared circle, a contest between the pair could well become a battle of belief.

In such an event, the heavyweights would be well-positioned to produce a fight for the ages.