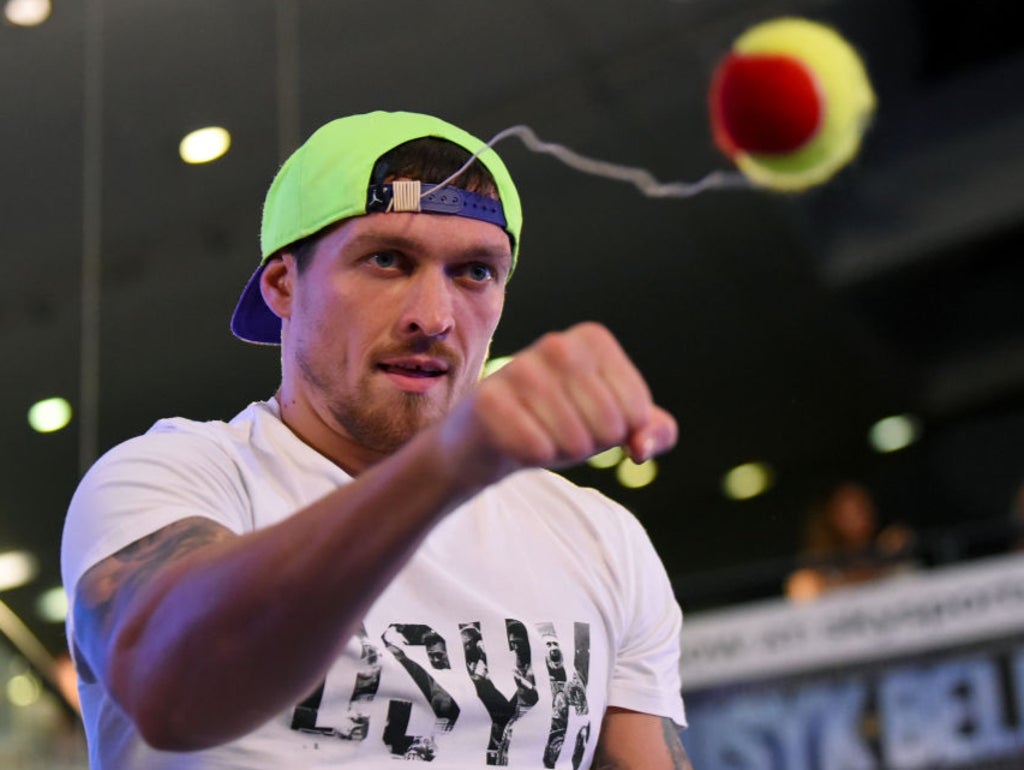 Oleksandr Usyk, boxing’s most successful road warrior, has won world title fights in Gdansk, Berlin, Riga, Inglewood, Maryland, Moscow and Manchester but for him London will always be his “lucky place”.

The Ukrainian southpaw has this week returned to the capital in preparation for Saturday’s clash with IBF, WBA and WBO world heavyweight champion Anthony Joshua at the Tottenham Hotspur Stadium. And, although it was the man with the belts who grew up just a tube ride away from the Tottenham High Road, Usyk will be feeling similarly at home.

Like Joshua, the 34-year-old capped a superb amateur career by clinching gold at the London 2012 Olympic Games and won his final – in the 91kg heavyweight division – on the very same weekend that Joshua did the same up at super-heavy. Both men have said this week that they never realised they were on a collision course.

But after Joshua’s much-discussed unification with WBC champion Tyson Fury fell out of bed, the Londoner decided to take care of his WBO mandatory challenger Usyk instead of relinquishing the title entirely.

“My compatriots will be there but also many other people from other countries and I love that. No matter if they support me or Joshua, I love fighting with a big audience,” he said.

“I believe it will be more difficult for him because he has three titles to defend and he’s fighting at home and defending at home. Then a baldish guy from Ukraine will come to his home country and will be looking for a big fight.

“In 2012, I was not thinking about fighting him because at that time I didn’t enter professional boxing yet but it was obvious he would become a superstar even back then because of the combination of factors; a guy from the UK, a heavyweight and many many other things. It was obvious that he would be a superstar.

“He says he does not remember me from back then… well, I believe he is joking. It doesn’t matter. I do remember him and have been watching his fights for quite a long time.”

Given the manner in which Usyk scorched through the cruiserweight division, winning all four belts within 15 professional fights, it was always obvious that he was destined to attempt the big step up to heavyweight. Joshua, of course, was a prime target.

Usyk’s final fight in the 200lb division came against Tony Bellew back in November 2018, when he stopped the Liverpudlian in the eighth round of their Manchester clash, and he has since boxed twice up at heavyweight.

The most recent of those was against another Brit in the form of Derek Chisora, who incidentally signed to Joshua’s 258 Management company earlier this month. Usyk, who weighed nearly two and a half stone less than Chisora, overcame a slow start to win a unanimous decision.

He is now vying to follow in the footsteps of one of his idols Evander Holyfield by winning world titles at both cruiserweight and heavyweight this weekend.

“Naturally I watched and followed Holyfield for quite some time and I really appreciate and admire him moving from cruiserweight and him fighting big guys,” he adds. “Every one of us has our own page in history, I respect him and follow him with respect.”

The 15st 7lbs he weighed for the Chisora fight was the heaviest of his career to date while Joshua came in at 17st 2lbs for his most recent clash, a ninth round stoppage of Kubrat Pulev in December. Recent pictures, however, appear to show a slightly slimmer Joshua and a fight weight below 17st is not out of the question. Either way, this is no David vs Goliath.

“As far as the feeling up at heavyweight,” Usyk says. “I have felt well and fit. The weight? I’ve gained some weight, yes.

“At the moment I don’t have any rough ideas or dreams of how the fight goes, I am looking forward to my victory. I want to win, I’ve done a lot, I’ve worked a lot and put a lot effort in and in the fight I will show and demonstrate what it means. At this moment in my career, this is the biggest fight. My opponent is an Olympic champion, he holds three versions of the world title, he’s a cool opponent.

“I am not going to be nervous. Look why would I do that? If I do that it would not change anything. I will not get stronger, I could become weaker. I will not need that. I will be calm and confident and I will probably read a book before or watch a film, I will speak to my loved ones or I may call my son. I am not going to do nerves at all.”

Indeed, Usyk’s programme of choice has helped him further acclimatise to a fight week in England.

“At the moment I am watching a British drama series,” he says. “But I only know the name in Russian. It is difficult to find the name… I got it, it is Peaky Blinders.

For now it remains to be seen whether or not Usyk can add a few belts to his own outfit this weekend.

“It will be a great pleasure to box in London again,” Usyk says. “I love London, it is my lucky place.”