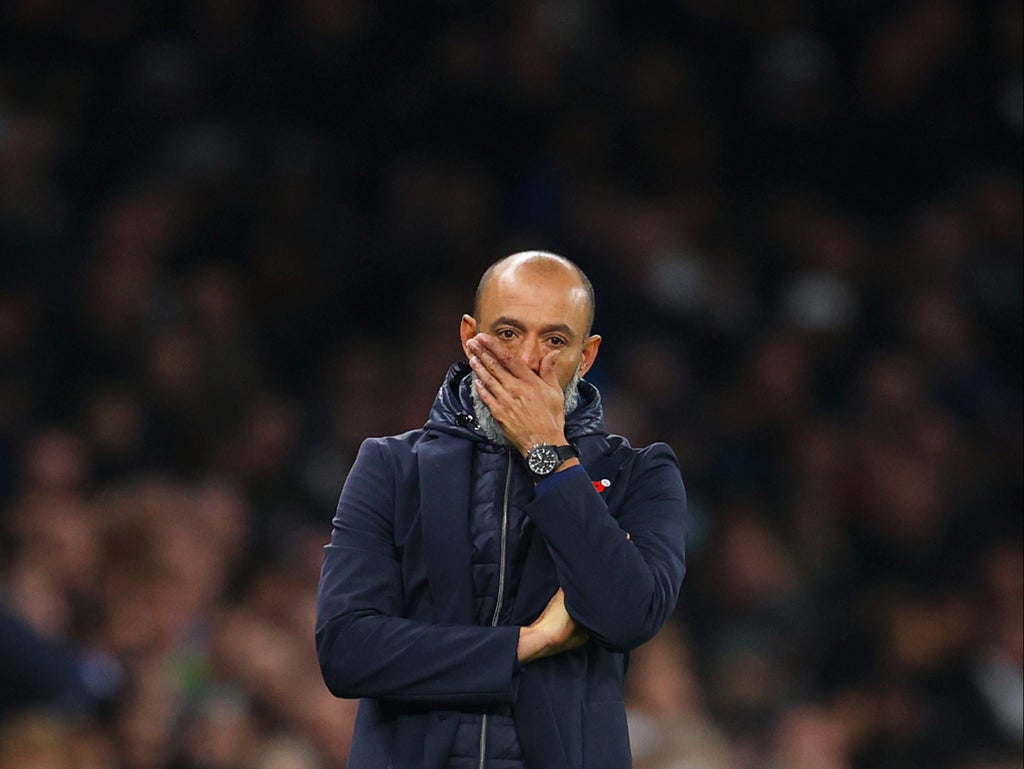 Shortly before Nuno Espirito Santo came back out for his post-game interview, the stewards at Tottenham Hotspur Stadium made a point of clearing out all the fans that had gathered.

The authorities at the club evidently wanted to spare their manager the public criticism that would have come his way, or what would have been an undignified scene.

Little could have been more humiliating than what happened on the pitch againstManchester United.

The atmosphere around the club is impossible to escape.

It is a furious frustration off the pitch, that comes from a dismal staleness on it.

Having previously proven a case study in how you defy football’s economic realities under Mauricio Pochettino, Tottenham have since become an exhibition as to how opportunities are squandered; how ground is lost.

That doesn’t actually apply to the football, of course. Barely an opportunity was created on the pitch, as Spurs didn’t record a shot on target for the first time in eight years. The play is meanwhile so conservative that barely any ground was made.

It was all so easy for Man United.

While Nuno’s approach does warrant pure football criticism, this is really about something much bigger.

The very choice of such a coach says much more about the direction of the club. That has not just been downward. It has been with so little energy or investment, at least from a perspective of football intelligence.

It is a club that has stagnated, the size of the mega-stadium that has grown around it only serving to make the side look worse.

When you glance at that squad, though, something becomes clear.

This is still just the remnants of Pochettino’s team. Six of the XI that started here were staples under him.

That remains the core that conditions the identity of the team. The grand irony of all this is that Pochettino wanted a refresh at the time – even if there were fair questions over whether he himself wanted to move on – but didn’t get it. The argument was ultimately economic, as the hierarchy tried to make calculated decisions, but the true cost has been far greater than that. It has been the ultimate false economy. Spurs have lost their brief status as a Champions League team, to the point they look a long way away.

The decision in late 2019 came down to whether it was more expensive to replace key players or replace the manager. They went for the cheaper option, and have never really recovered.

That squad was visibly stale, only for Daniel Levy to then make it worse by picking two managers in Jose Mourinho and Nuno who play such turgid football.

The description around the training ground now is that Nuno is “Mourinho without the CV or the charisma”. Training and tactics are being described as devoid of intensity. It is a club just drifting.

Within that, there are now suddenly fair arguments over whether the resistance to selling Harry Kane may be one of the most short-sighted decisions in the modern game.

He no longer looks a £100million player, let alone £150m or £200m. He no longer looks in any way dangerous. The sight of him trundling down the right wing in the second half for an aimless and ineffective cross to nobody was pitiful.

But then that’s the grander problem with situations like this.

It just dilutes everyone’s display level. It’s more difficult for anyone to play well, suppressing their performance and their confidence.

Kane would surely look transformed in a more progressive system under a more proactive manager, where there was a more specific role suited to his talents. This is all just so open and vague in front of a general attempt to be defensively solid.

It’s bad, and looks like getting worse. This is what Spurs were supposed to want, and even what Levy articulated in a statement.

That decision is now all the more confusing.

Most at Spurs see the source of the problems as way beyond the Italian, though. It was why there were more calls for Levy to go rather than Nuno.

That is usually when hierarchies act.

The problem for Spurs is that most in the game pretty much see Nuno as a caretaker anyway. For all the enthusiastic statements around the time of his appointment, the feeling is that he is basically just there until a better option presents itself.

It might give him a stay of execution, that he effectively afforded Ole Gunnar Solskjaer. Some think the situation is now so bad that Spurs will basically assess what next and make their move in the November international week.

That is what happened in 2019. That is when the problems really started.

Everything since has been so dismally stale.