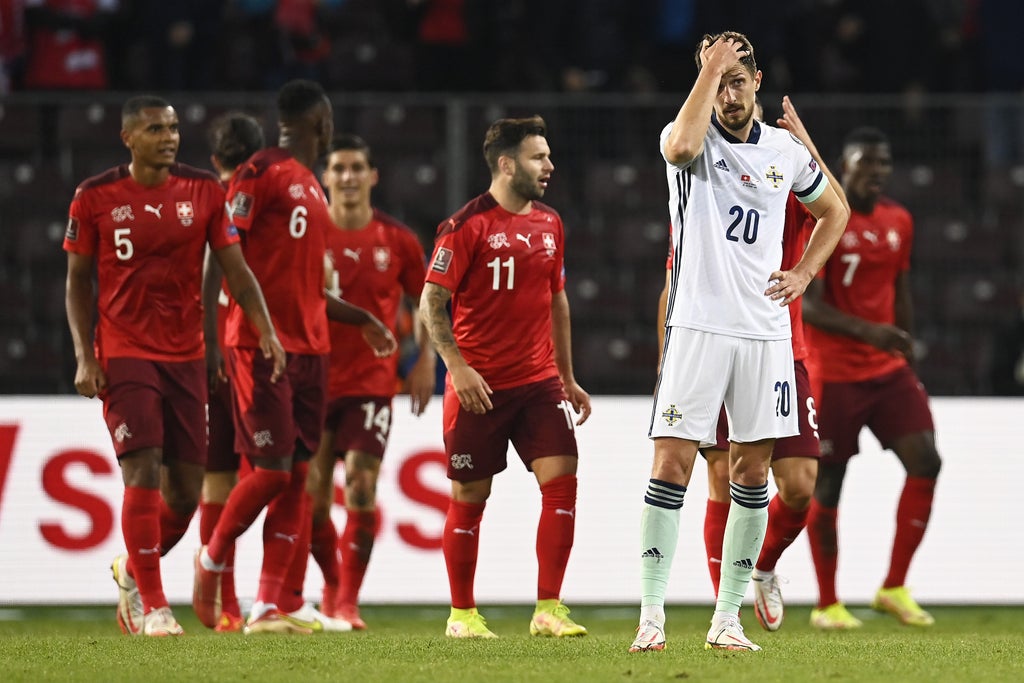 Northern Ireland’s World Cup hopes were effectively ended by Saturday’s contentious defeat to Switzerland but the qualifying campaign rolls on as they head to Bulgaria on Tuesday.

Northern Ireland may have spent Sunday clearing their heads on the waterfront of Lake Geneva but there was still a lingering sense of injustice as they set off for Sofia, with the pain only increased given it was Switzerland yet again who controversially ended a World Cup dream. They were able to harness their anger in a strong second-half showing at the Stade de Geneve, defending doggedly despite being a man down, and will want to summon the same spirit to make a point on Tuesday.

Though it is still theoretically possible for Northern Ireland to close the six-point gap to Switzerland in the remaining three matches, realistically it is time to move on from hopes of playing in Qatar. But Ian Baraclough was keen to emphasise there is still plenty to play for both in Sofia and in next month’s remaining fixtures – now the goal is to improve Northern Ireland’s seeding and avoid the sort of qualifying draws that have paired the nation with Germany and Holland in Euro 2020 qualifying, and Italy and Switzerland this time around.

Northern Ireland are not alone in going into Tuesday’s match smarting from defeat. Bulgaria’s own hopes of qualifying were effectively ended at the weekend in a surprise 3-1 loss to Lithuania as Fedor Cernych scored twice in the last 10 minutes for the hosts. Bulgaria showed promise in drawing with European champions Italy but Saturday’s reverse leaves them with only three wins in their last 27 games.

These two sides shared the points when they met at Windsor Park in March, with Northern Ireland the ones to leave with regrets. Though they needed a superb Bailey Peacock-Farrell save to deny Dimitar Iliev late on, it was a match Baraclough’s men dominated, unable to capitalise due to that familiar problem of finding a cutting edge. Northern Ireland had 14 efforts on goal in total, none closer than a Stuart Dallas header off the crossbar in the first half.

Another qualifying campaign is destined to end in disappointment but Baraclough is clear about the progress Northern Ireland have made during his tenure to date, with the 50-year-old expected to be offered a new contract in the coming weeks. He has only managed four wins – including the penalty shoot-out against Bosnia and Herzegovina – from his 17 games in charge but has dealt with a myriad of injuries and other setbacks to bring through several young players. “I think we’re in a good place,” Baraclough said. “We’ve got more numbers, we’ve got players who are capable of stepping up into the squad and giving me a headache.”