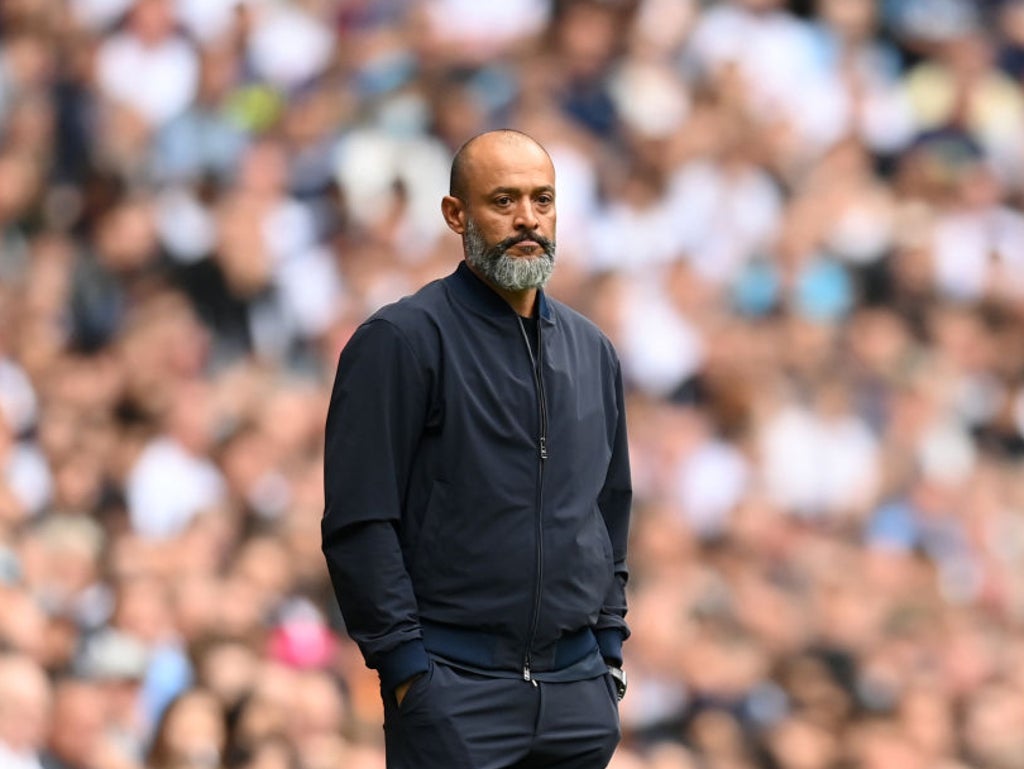 Five months after insisting Nuno Espirito Santo wasn’t in contention for their managerial position, and four after tail-between-the-legs appointing him, Tottenham pulled the trigger on a situation so geared to failure that the players didn’t seem to bother with it anyway.

The 47-year-old was far from the club’s biggest problem, but he was never the solution to help right wrongs on the pitch – especially not after being, at best, sixth-choice to take charge.

These sentences alone scream of the shambles constructed by a series of poor decisions in North London.

Spurs have circled back to Antonio Conte to transform their mess into magic, having been unable to strike a deal with the serial winner at the start of June. That decision, in part, was forced by Manchester United’s walk in the Tottenham Hotspur Stadium park on Saturday and their own allure to the Italian.

They cannot cede one of the very few managers capable of steering them out of a hellscape to a club that continues to pretend they are not in one.

Conte is a quick fix to remedying on-field ills but 29 months after reaching the Champions League final, how did Tottenham manage to both boast a £1 billion benchmark of a stadium and bankrupt themselves of being a team worthy to fill it?

You’d have to stretch back all the way to 2016 when Pochettino had first started to publicly warn chairman Daniel Levy that they needed to “refresh the squad to maintain the motivation.”

The message had to be broadcast to a wider audience because privately it was obvious that Tottenham were happy to milk every inch of managerial magic from the Argentine to keep them competitive rather than sustainably ensure it.

Levy had gold: a progressive manager making Spurs one of the most energetic, hard-working and attractive sides in Europe all stemming from graft on the training pitches. Harry Kane was transformed from a fourth-choice forward into one of the world’s best and by March 2019, only Manchester City had amassed more league points than Tottenham.

But Pochettino kept preaching the same sermon about a refresh, which he amplified as Liverpool started to properly take flight under Jurgen Klopp and the Pep Guardiola juggernaut grew more formidable. Chelsea and Manchester United, he would repeatedly say, had the resources to mask any mistakes and ultimately be successful with the right managerial hire.

Tottenham were very good, but they were very much in danger of getting left behind. But Levy wasn’t listening. As Spurs headed to the first European Cup final in their history, this was the state of play: since Pochettino’s appointment in 2014, they had a net spend of just £24m.

For the same period, here is how their rivals stacked up:

Spurs, with the lowest wage bill in the top six, became the first Premier League team to not make a signing in an entire season. That they reached the showpiece of Europe’s leading competition was an absolute triumph of coaching. It should never have happened under the restrictions in which Pochettino was operating at a time when Tottenham’s rivals have never been so well-resourced.

The final in Madrid always felt like the end of the line for the Spurs people knew and loved: they were jaded, out of ideas, bored of each other. Pochettino’s miracle well had dried up and he was exhausted at having to go above and beyond with the same tools, a significant portion of which wanted to be elsewhere.

“You can use the example of Liverpool after they lost to Real Madrid the season before, that was a massive motivation and inspiration to be back in the future,” Pochettino said last year. “But I knew after five years and with the way we were working, all the things that happened, it was going to be difficult to change a little bit in our minds and to stay open to design another plan, or a strategy to build again, a different chapter. A different project was going to be difficult to maintain — to keep improving.”

For all the focus on Spurs’ lack of spending, the absence of major sales also led to the state of absolute staleness. Levy has been so bedded to his status as a tough negotiator that he has stuck on players, when at maximum value, even when the coaching staff would twist.

This was the case with Toby Alderweireld to United in 2018. Christian Eriksen was valued at £80m at a point, while Dele Alli was the £100m-man but Levy refused to entertain any talks over them. It was not just on account of his own billing, but he wanted Spurs to be like the traditional powerhouses that do not sell their key assets.

Liverpool’s example of letting Philippe Coutinho go to bring in Virgil van Dijk and Alisson was pointed out to the chairman, but he was adamant that Spurs could succeed as they were. Building the brand and the stadium was more important than constructing a long-term plan.

The Kane saga in the summer fitted these lines. Having lost the magic of Pochettino and then the box-office draw of Jose Mourinho – we’ll get to him – keeping the England captain was not solely a football decision. Levy, still after a naming rights partner for the stadium, needed to protect Spurs’ value.

Ah, Mou. If there was ever a move that crystallised how much Tottenham’s chairman believed a manager could wave a wand and make trophies and triumph appear with minimal assistance from the club, it was his appointment of Pochettino’s successor.

The narrative out of the Hotspur Way training ground at the time was they had everything in place and just needed “a serial winner to get them over the line”. Mourinho was the antithesis of Pochettino, at odds with the squad, but he was amazing for the Amazon cameras, interest in Spurs, and the delusion that it was the dugout that needed a fresh face.

He lasted 17 months. Since then, Levy’s ideal man, Julian Nagelsmann, joined Bayern Munich. Erik ten Hag ended speculation linking him with Spurs by inking a new Ajax deal. Brendan Rodgers distanced himself from the job. Discussions were held with Pochettino, already at Paris Saint-Germain, begging him to return. Conte was lined up and talks were scorched pretty sharply. Paulo Fonseca was on the verge of being appointed before that went up in smoke and a fan protest killed the prospect of Gennaro Gattuso being put in charge.

So five months after insisting Nuno wasn’t in contention for their managerial position, and four after tail-between-the-legs appointing him, Tottenham pulled the trigger on a situation so geared to failure that the players didn’t seem to bother with it anyway. What a mess they’ve made.