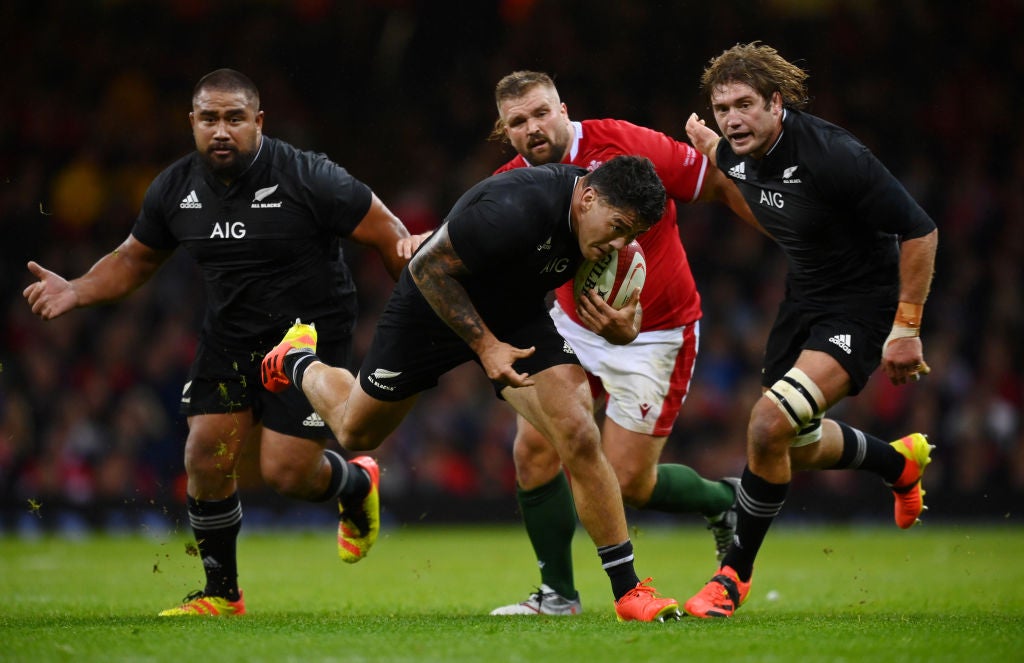 Jones hurt the same shoulder that threatened to sideline him from this summer’s British and Irish Lions tour of South Africa before he made a startling recovery and started all three Tests.

Flanker Ross Moriarty also departed early after Wales went into action without 20 players – including a number of Lions – due to injuries, illness and Gallagher Premiership-based personnel not being released by their clubs as the game fell outside World Rugby’s international window.

None of that strife bothered New Zealand in extending a relentless winning run against Wales. They are unbeaten in the fixture since 1953.

Wales, whose tough Autumn Nations Series continues through games against South Africa, Fiji and Australia, battled hard in front of a 70,000-plus Principality Stadium crowd. But they were ultimately outclassed and restricted to a second-half try for centre Johnny Williams, with Gareth Anscombe booting two penalties and Rhys Priestland adding a penalty and conversion.

Anscombe returned to Test rugby following an absence of more than two years after being sidelined by a major knee injury, while Jones won his 149th cap, overtaking New Zealander Richie McCaw’s record for one country, although his evening lasted just 18 minutes.

It proved a nightmare start for Anscombe as he saw a pass intercepted by Barrett after just four minutes, and he sprinted clear to claim a try that his brother Jordie converted.

Wales had shown initial promising signs before the intercept, but they quickly regrouped and Anscombe kicked a penalty, making it 7-3.

The game swiftly found a rapid tempo, and Beauden Barrett was lucky to escape a yellow card following a knock-on when he looked to intercept Wales wing Owen Lane’s inside pass intended for Williams.

Jordie Barrett then booted a penalty, before Wales suffered an injury hammer-blow when Jones was forced off.

Jones left the action, being replaced by Will Rowlands, as Wales lost their leader with more than an hour of the contest remaining, with centre Jonathan Davies taking over leadership duty.

Wales had a let-off after prop Nepo Laulala dropped the ball when a try looked certain, before Jordie Barrett kicked another penalty and the home side trailed by 10 points.

New Zealand’s accuracy made the difference, and they claimed a second try six minutes before half-time when outstanding build-up play was rewarded with a score for Perenara.

Wales suffered another injury setback on the stroke of half-time when Moriarty was forced off following a tackle by Laulala and flanker Ethan Blackadder, with Laulala being yellow-carded for not wrapping his arm in the manoeuvre.

Anscombe then kicked his second penalty on the stroke of half-time, and New Zealand took an 18-6 lead into the interval.

Barrett completed his penalty hat-trick early in the second period, while Wales sent on Cardiff fly-half Priestland for Anscombe, making a first Test match appearance since 2017.

Priestland was immediately in the action, kicking a penalty, only for the the All Blacks to quickly resume normal service when Jordan conjured a superb solo try, with Jordie Barrett adding the extras.

New Zealand finished in trademark fashion as Papalii, Reece, Lienert-Brown and Beauden Barrett added further tries during a devastating finale that showcased All Blacks rugby at its finest.