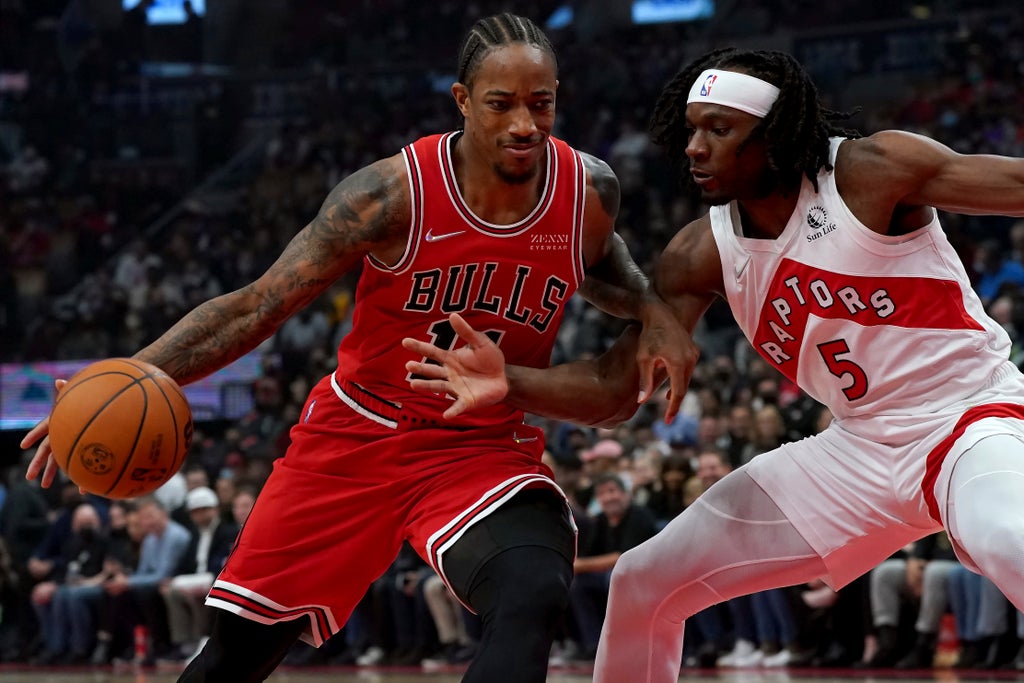 The Chicago Bulls defeated the Toronto Raptors 111-108 on Monday to secure their fourth straight win and best start to a season in 25 years.

In control through the first three quarters, the Bulls saw their opponents stage a late comeback to draw within two points with just under five minutes left.

However, former Raptor DeMar DeRozan took it upon himself to turn the tables once more, scoring 11 points in the fourth quarter to ensure the narrow win and Chicago’s place as the last undefeated team in the Eastern Conference.

He finished with a game-high 26 points, while OG Anunoby top-scored for Toronto with 22.

Giannis Antetokounmpo was one assist shy of a triple-double as he led the Milwaukee Bucks over the Indiana Pacers 119-109.

The reigning Finals MVP posted 30 points and 10 rebounds to go with nine assists as the Bucks cruised to their second win in-a-row.

Malcolm Brogdon’s 25 points led the way for the Pacers, who fell to their third defeat of the season.

Brooklyn’s roller-coaster early form continued against Washington as the Nets eased to a 104-90 victory over the Wizards.

The Nets outscored their opponents by 18 in the first quarter and held on to their advantage the rest of the way behind a combined 46 points from Kevin Durant and Patty Mills.

The Miami Heat rebounded from a tough loss to Indiana to sweep past the Orlando Magic 107-90.

Jimmy Butler was near-unstoppable from the floor for Miami, making 15 of his 21 field goals in a 36-point performance.

The New Orleans Pelicans picked up their first victory of the year 107-98 over the Minnesota Timberwolves.

Karl Anthony-Towns scored 32 points and Anthony Edwards 28 but they received little help from their team-mates as Minnesota were unable to recover from a sluggish first quarter.

Elsewhere, the Boston Celtics overcame the Charlotte Hornets in overtime 140-129, Damian Lillard missed all eight of his three-point attempts in the Portland Trail Blazers’ 116-86 defeat to the Los Angeles Clippers, Trae Young scored 32 points for the Atlanta Hawks in a 122-104 win over the Detroit Pistons and the Cleveland Cavaliers upset the Denver Nuggets 99-87.