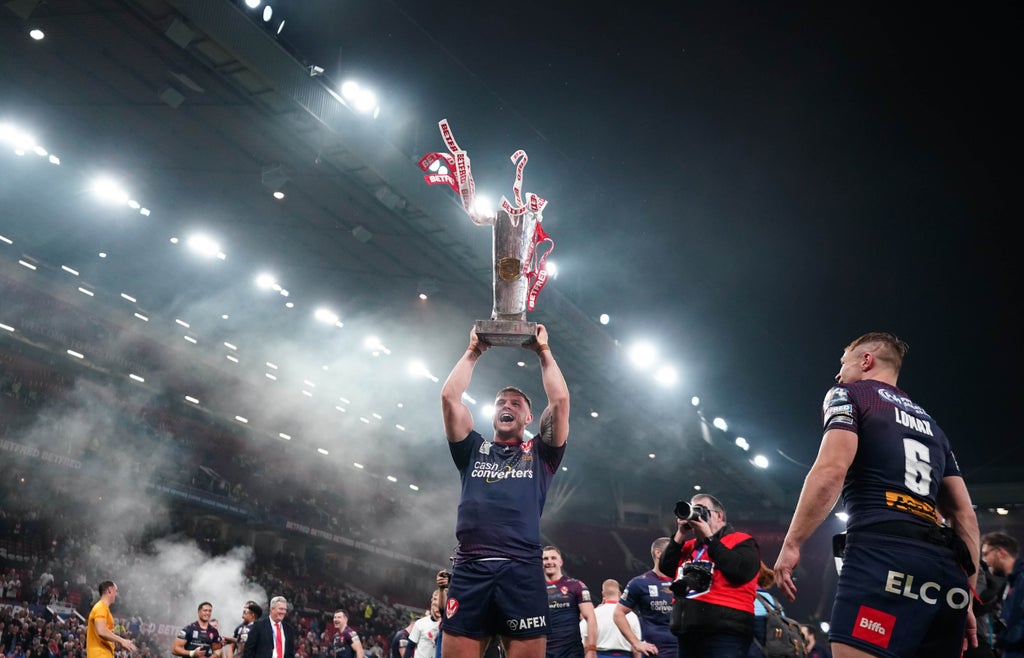 St Helens loose forward Morgan Knowles is hoping his team’s third consecutive Grand Final win will finally earn them the recognition they deserve after claiming they were disrespected and portrayed as “villains” in the build-up to Saturday’s showpiece.

A 12-10 victory over first-time finalists Catalans Dragons enabled them to complete the league and cup double for the second time and match Leeds’ achievement of three successive Grand Final victories.

It also confirmed St Helens as the most successful club of the summer era, with a ninth Super League title going back to their inaugural success in 1996, when the prize was decided under the old first-past-the-post method.

“There was definitely motivation for us because we were portrayed as the villains,” he said.

“Unless you were a Saints fan, everyone wanted to see Catalans win and probably rightly so because they were the underdog and it would be great to see another team win it and especially a French team.

“What Catalans have done is amazing and the expansion is really positive for the game and I’m definitely happy about that.

“They’re probably going to be in more Grand Finals, Steve Mac (McNamara) has done a great job and they’ve recruited the right kind of players.

“But, to be honest, I think we deserve more credit. We’ve been the best team for the last three or four years, although we didn’t win it in 2018.

“But the consistency we’ve had – the win percentage has been better than any other team in Super League.

“British and UK culture likes to see people fail and the underdog win and I think it’s about time now we get the credit we deserve for three wins back-to-back, the Challenge Cup and League Leaders’ (Shield) along the way.

“I’m really, really proud to be a part of this team and that’s not taking away from Catalans reaching the Grand Final.

“But I think we deserve some credit as well. I’m just really proud to be a part of this group and what we’ve done over these last few years has been special.”

Saints’ hero was Fiji centre Kevin Naiqama, who marked his final appearance with a try in each half to win the Harry Sunderland Trophy as man of the match.

Naiqama, who is returning with his family to Australia confirmed after the match that he was likely to retire and earned the highest praise from Knowles.

“He’s unreal,” he said. “He’s one of the nicest blokes I know, let alone played with.

“He’s tough, he’s professional and he speaks really well when he talks to the group.

“Since he’s come in he’s won three out of three (Grand Finals) and, for him to go out winning the Harry Sunderland and scoring two tries, I couldn’t be happier for him. He’s been an absolute credit to himself, his family and the club.”

In normal circumstances, St Helens would now be turning their thoughts to the World Club Challenge.

But the Covid-19 pandemic put paid to the annual clash of the Super League and NRL champions in 2021 and Saints face an anxious wait to see if a proposed duel with Penrith Panthers can go ahead in February.

The 24-year-old Knowles played against Nathan Cleary and company when the Saints academy toured Australia in 2013 and would love nothing better than a rematch.

“I played against Cleary and we ended up beating them,” he said.

“It would be good to get an opportunity to play them because we were robbed of that last year with Covid. Nothing can help that but it’s still unfair.”