A cheeky pitch invader has memories he will cherish for life after ‘storming’ the field moments after FC Barcelona beat the A-League All Stars 3-2 in Sydney on Wednesday night.

The starry-eyed youngster headed straight to Barca head coach Xavi Hernandez, who no doubt was relieved the Catalan football giants escaped with a win in the five-goal thriller at Accor Stadium in front of 70,174 fans.

Famed Spanish midfielder turned manager Xavi initially looked bemused as to how the pint-sized football fan had managed to comfortably evade on-field security – but happily shook hands with the boy before he was rounded up and removed from the arena.

He also signed a football jersey for the child, who will be the envy of all his mates at school.

On the pitch, the crowd were treated to an entertaining 90-minute spectacle, with  French star Ousmane Dembele opening the scoring in the first half with a clinical finish. 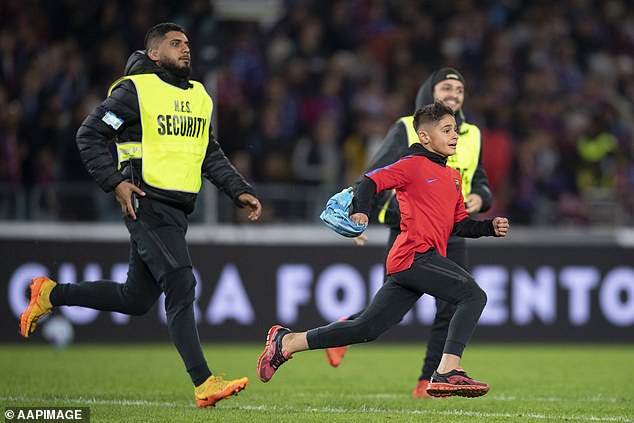 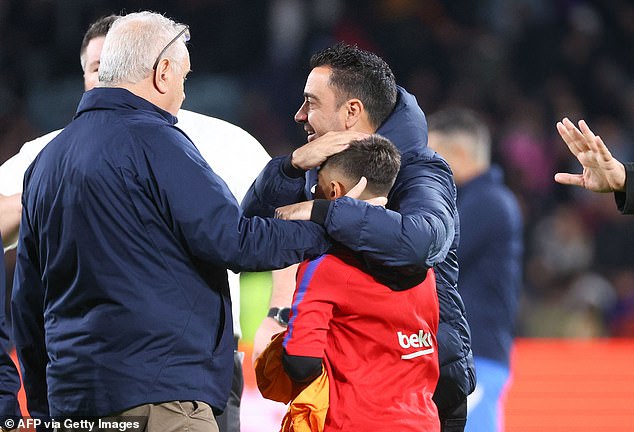 The football fan made his way straight to Barcelona manager Xavi, (pictured) who later signed the youngster’s football jersey 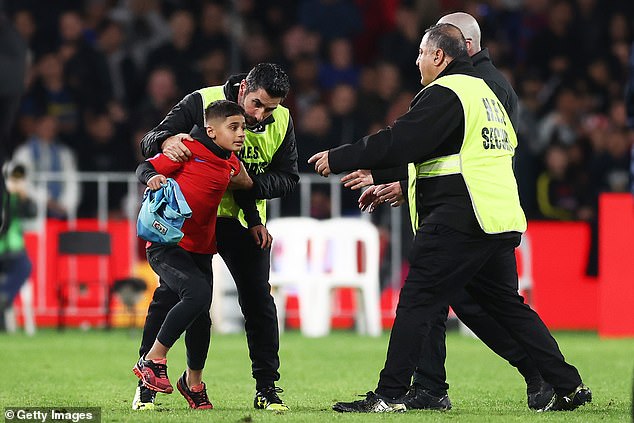 Incredibly, the Dwight Yorke-coached locals took a 2-1 lead after halftime, thanks to goals from Reno Piscopo and Adama Traore.

With bragging rights on the line, the La Liga runners-up lifted the intensity, with hulking winger Adama Traore and wonderboy Ansu Fati, 19, finding the back of the net.

Former Manchester United striker Yorke, who had just two days to work with his squad of home grown talent, was left pondering what might have been at the final whistle.

‘I’m sure that everybody has probably left here pretty pleased,’ he told Channel 10.

‘Maybe, from our point of view, we’re disappointed with the fact we didn’t win the game.

‘Overall, I think it was a terrific performance from the players. They deserve all the credit and praise they are likely to get.’ 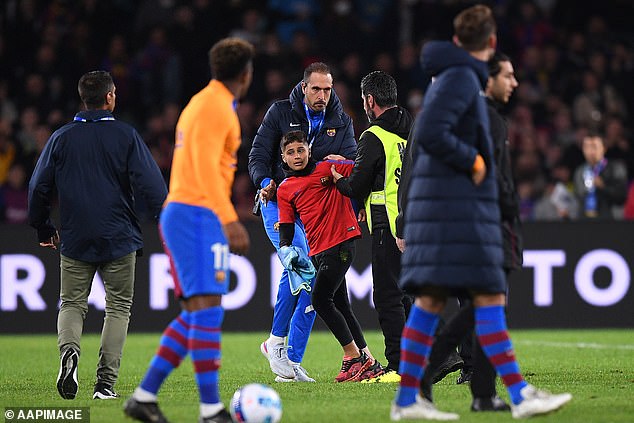 After meeting one of his idols Xavi, it was soon business as usual, with the youngster escorted off the pitch 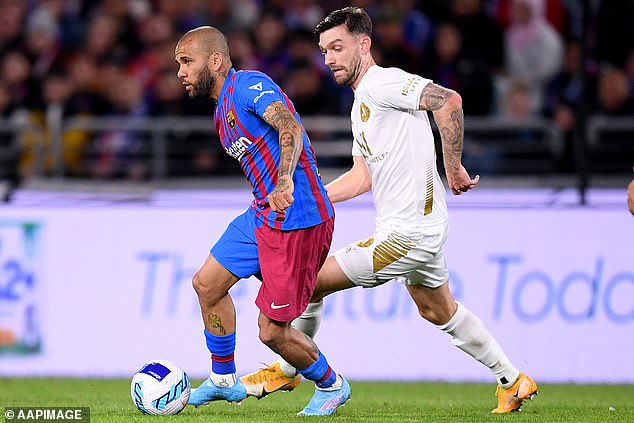 Brazilian veteran Dani Alves stood out for Barcelona, who came from behind to beat the A-League All Stars 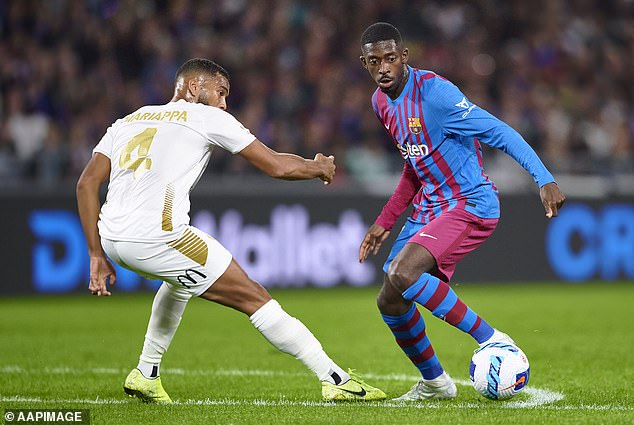 French winger Ousmane Dembele dazzled for the Catalan giants, and scored the first goal of the friendly

Central Coast Mariners rising star Garang Kuol, 17, caught the eye with his cameo off the bench, and impressed Xavi, who also admitted the enterprising play of the locals shocked him.

‘They played a really good game,’ he said.

‘It was a good test for us to finish the season and now to prepare for the next one.

‘I think, tactically, they (the All Stars) were very good. They created chances in transition and we suffered at times.

‘It was a big surprise for us because I don’t follow the A-League a lot.’ 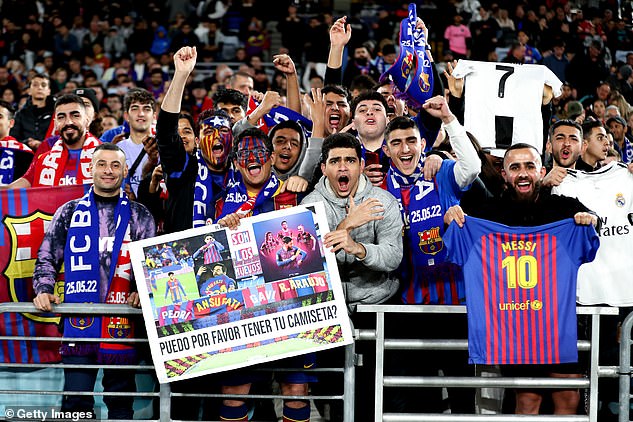 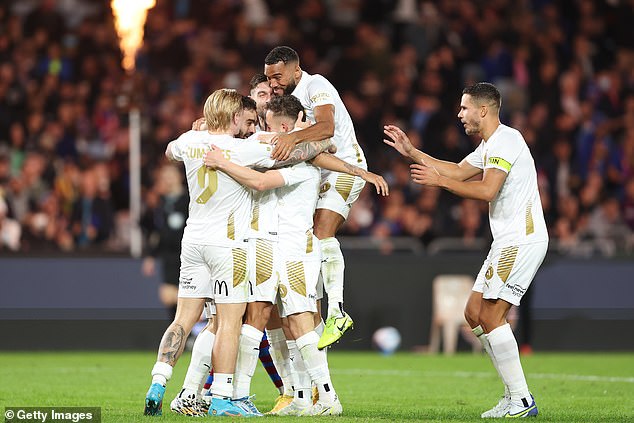 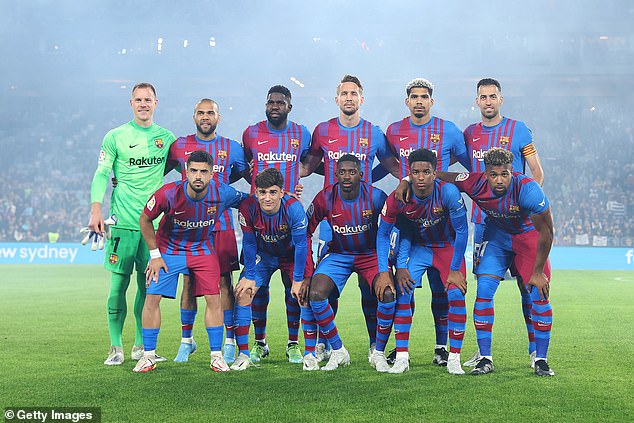