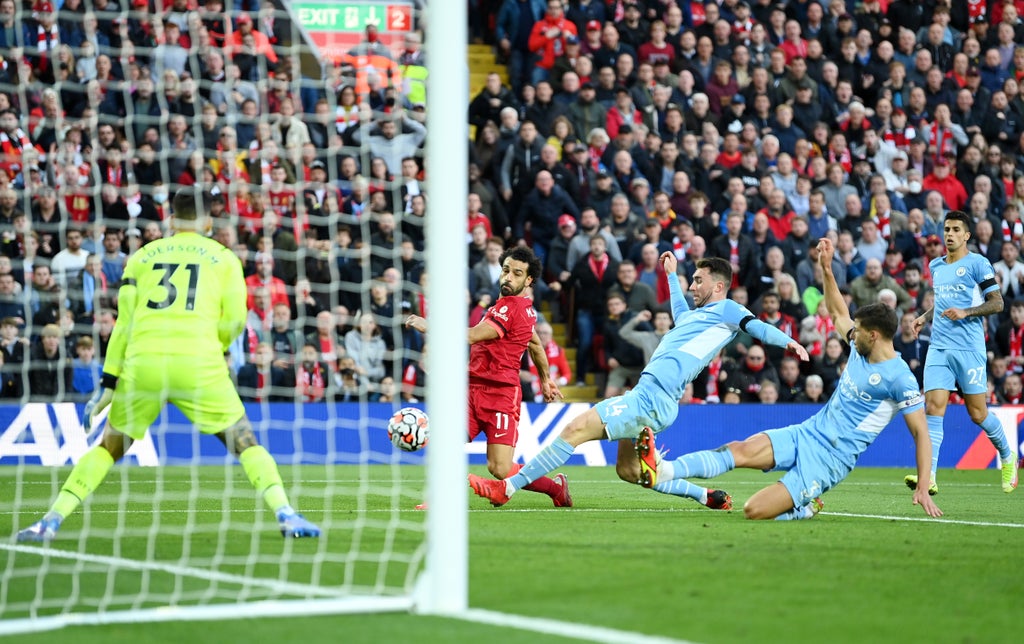 Respect is cheap. There has been an outpouring of it for Mohamed Salah after his performance in Liverpool’s 2-2 draw against Manchester City on Sunday.

Salah, for so long labelled a diver and a cheat, a lightweight, a collector of more chances than goals, is getting the widespread praise he deserves. In his fifth season on Merseyside. After winning two golden boots and racking up 134 goals.

The 29-year-old does not need anyone’s approval. He has a great sense of his own status. The Egyptian is not the sort of person who concerns himself with what other people think.

The one place where Salah has never been short of admirers is at Anfield. The Kop love him. So too do Fenway Sports Group (FSG). The owners have been in thrall to him for more than seven years. They wanted to sign him from Basel but a bit of Brendan Rodgers jiggery-pokery led to Salah ending up at Chelsea and in the hands of Jose Mourinho, the arch doubter of flair.

Where it matters, Salah has always been surrounded by believers. That doesn’t matter much at all. His paycheque is a reality check.

Fans get angry when the subject of footballers’ wages is discussed. They are outraged when men who are earning hundreds of thousands per week whinge that they are underpaid. It is not about money, though. It is about professional pride.

Even in his own dressing-room, Salah is not the top earner. That is madness. When he looks around the Premier League there are players who are banking almost double the Liverpool striker’s salary. All the ‘best player in England’ plaudits mean nothing if they are not backed up with hard, cold cash.

FSG made a virtue of extending the contracts of their core players over the summer. Salah’s is the last significant deal to be renegotiated. There have been suggestions that he is demanding £500,000 a week but what the forward’s representatives want is parity with the division’s best players. Kevin De Bruyne is on about £380,000 per week. Salah is at the same level – at least on the pitch.

With two years left on his contract and earning £200,000 per week, Salah can afford to sit tight to get what he wants. He is not going to end up on the breadline. There is potentially one last big move in his career and he is more than open to the possibility.

The big problem is that Real Madrid, who appear to be the most natural destination, are fixated on Kylian Mbappe. Barcelona are skint and in need of a huge rebuilding programme. In the absence of Mbappe, Paris Saint-Germain would be the only other foreign club with the spending power and prestige to suit Salah. The market for him is small but it exists. And there is also the prospect of City making overtures.

From FSG’s point of view, paying the striker what he wants would destroy any semblance of a wage structure. One of the reasons Salah’s contribution to Liverpool’s success has sometimes been downgraded is that the turning point in the team’s fortunes is generally considered to be the arrival of Virgil van Dijk in January 2018. The Dutchman made a big difference but Salah scored 44 goals that season. Van Dijk and Trent Alexander-Arnold tend to be seen as more integral to the way Jurgen Klopp’s team play and Salah has been too often grouped into the ‘front three.’ But, as the famous saying once applied to another Liverpool superstar Kevin Keegan goes, goals pay the rent. And they deliver trophies.

The owners have a lot to weigh up. They are conscious that they cannot spend like City. Their fear is that Salah is approaching 30 and reaching the point where players are more susceptible to injury and when pace begins to erode. FSG have been burnt in the past. Daniel Sturridge was the highest-paid player at Anfield for a long spell when the England striker spent more time on the treatment table than on the pitch. This is a very different situation. Salah is durable.

Forget the knee-jerk acclaim after Sunday. Salah has been among the best three players in the Premier League ever since his arrival from Roma for a bargain £36.5m four years ago. It would not be profligate of FSG to pay him the going rate now.

Respect is nice, readies are better. Liverpool need to stump up the cash. Money can’t buy love but it’s the only way to show you really care in football.