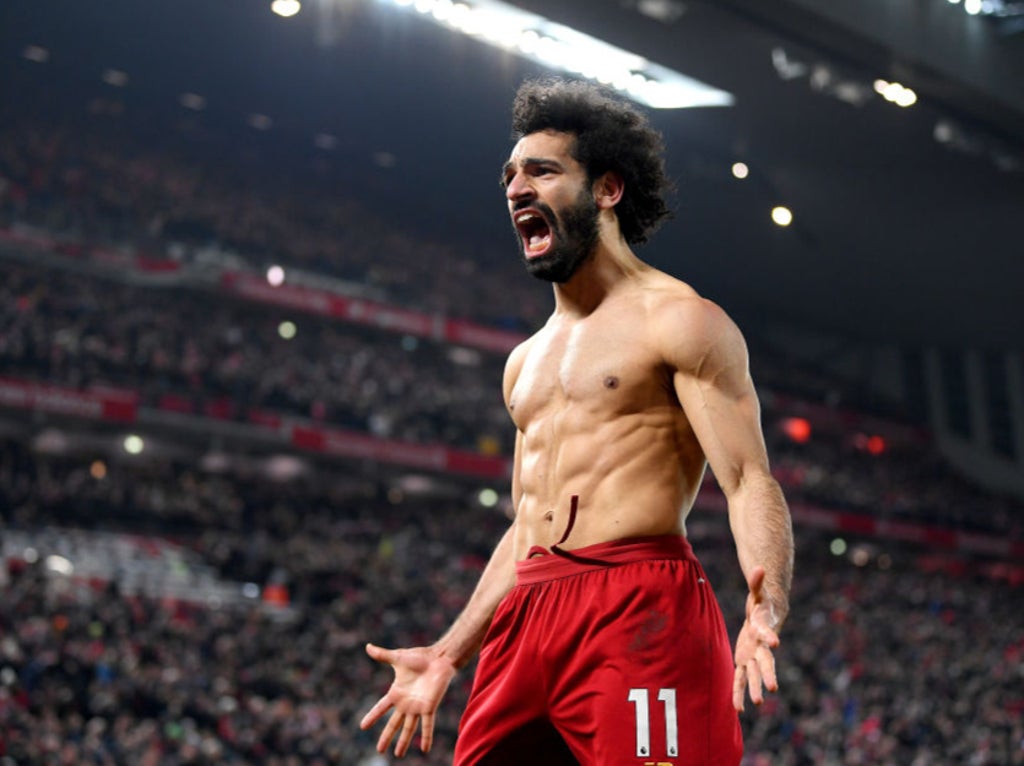 Early on in his career, Mohamed Salah looked at Cristiano Ronaldo’s physique and realised that was what he needed to aim for. The Egyptian read up on what was required in regard to nutrition and conditioning and applied it all assiduously.

It has played its part in Salah putting in the kind of form that would rival any spell from the Portuguese star or Lionel Messi. The Liverpool forward has scored 12 goals in 11 games this season, with some of them spectacular moments that have made many wonder whether they are witnessing something special.

It has given rise to another discussion that has surrounded Ronaldo and Messi, which is whether Salah has now usurped both as the best player in the world. As simplistic as that question is, it can be aided by a simple rationale. What player would do the most damage to an opposition side at the moment? Who would defences most fear? On the evidence of the first months of the 2021-22 season, it seems clear it is Salah. It is not just about the goals. It is about the manner he can seemingly transform any moment into transcendent glory. Give him the ball in any area and he will take you apart, as he did to Manchester City and Watford in the last few weeks alone.

If that seems an insufficient period of time to inform such a lofty discussion, it gives rise to a much more interesting question, that is relevant to the bigger decision over Salah’s new contract: How sustainable is this form? How long can Salah produce this? Is this a career peak that will be followed by an inevitable decline, or is it actually the start of another stage of the Egyptian’s career?

With Salah having recently turned 29, traditional football thinking would have it that he is in his physical prime, and probably only has two years left at the absolute top. That is the rationale behind the repeatedly cited idea of the “last big contract”.

But the modern football game has started to escape such traditional thinking. So many of the top scorers, and top players, are in their mid to late thirties.

A question relevant to Salah is whether these peers represent outliers, or the start of a new trend, naturally influenced by advances in sports science. The latter would stand to reason. It would also greatly change the discussion around Salah’s new contract if he has six or seven years left at the top rather than two or three, before you even get to the exhilarating idea that he might actually get better.

This is what happened with Lewandowski. He moved onto a new level just at the age when most forwards are expected to go into decline.

Much has been made of the Pole’s curious nutritional habits, and the way he reverses the order of his meal courses, but such personal adaptations feed into the idea that broader scientific advances are prolonging careers.

The only problem, appropriately enough given the subject, is the lack of available data. The fact the most prominent examples have been so recent means the only study has been one from 2019, on the first 25 years of the Champions League. It showed that the average age of players in the competition had risen from 24.9 in 1992 to 26.5 in 2017. That at least backs the instinct of many in the game, that the trend is true.

“There is a general sense among sports science that it is indeed the case,” says Dr Matt Stride, a consultant with Isokinetic who works with Brentford. “There just isn’t a definitive, longitudinal study to determine that.”

The feeling is nevertheless shared by many of his peers.

“I would say there is no doubt that, on average, athletes in all sports are enjoying longer careers – or at least have the ability do so,” says Stuart MacMillan, sprint coach and chief executive of ALTIS. “The science that underpins these decisions now is light years ahead of where it was even a decade ago.”

Ciaran Deeley, a sports scientist at Queens Park Rangers and PhD researcher, agrees: “Our players are faster, stronger, more robust and have a greater capacity to replicate the big high-intensity movements of the game.”

As interesting as the nature of the advances, though, is their potential effect on the sport. It is not just that players can go for longer, after all. It is that there might be an immense influence on tactics and play.

Some of the changes are obvious. Salah, like Ronaldo, was able to see the benefits of superior physical discipline from the gym he went to in his free time in Egypt.

“Simply put, professional athletes just have a better appreciation of all the things that go into enjoying a long and healthy career,” McMillan says. “And now have sufficient motivation to take it seriously.”

More importantly, this appreciation has been honed and maximised.

“The clear big advance has been GPS technology,” Dr Stride says. “It gives you lots of things: speed velocity, total distance covered. It helps you monitor their training load, and the intensity of training. Level one is low and five is trying to recreate match-type intensity… The sports science team can in effect turn them into better athletes.

“They have a talent, but the knowledge can condition them to run better, sprint quicker, they can decelerate better, they can accelerate better. It improves both types of injury prevention. Primary prevention is perhaps identifying something in terms of the way they move, their strength, trying to optimise them to reduce the risk of injury. And then secondary prevention is once someone has had an injury what you can do to minimise the risk of another injury recurring again.”

In short, it is much easier to ensure players are constantly at their sharpest and avoid unnecessary physical problems.

While that will generally help prolong careers, it is the more specific changes that might really change careers.

Many in sport science have realised the folly of just looking at a player’s birth date. “Age in itself is a very poor metric of performance,” Dr Stride says. “In the past, there was almost an acceptance that once you’re on the other side of 30, you ‘lose a step’, and your careers are almost over,” McMillan says.

It is now more about how different attributes vary with age.

This is something that Jeremy Steele has attempted to build models around at his company, Analytics FC.

“We have found, for example, dribbling tends to decline very early,” Steele explains. “You start to see a real decline in numbers – even from the best dribblers in the world – from the age of 26, 27. Passing, on the other hand, tends to hold very well into the early thirties. They can stay world-class for some time.”

This is predictably tied to progress in research on individual physical attributes. A growing school of thought is that players can still run as fast as ever into their mid-thirties, but just can’t necessarily do it as often.

“What we are potentially seeing nowadays is a player’s speed is remaining further into their thirties,” Deeley explains. “Though with greater need for care and appropriate loading and support. You will see that with players in their thirties doing less sprints in the game, and instead picking and choosing their moments for maximum effect.”

“Some players – such as Ronaldo and Lewandowski – change their games to suit their declining physical abilities, but maximise their still-sharp skills,” McMillan says.

And this is where the future may really lie. We may see more curated positions, so that players can have the same effect for longer, but through a different role.

“There are certain numbers you can individualise,” Steele says. “You can really impact the way clubs work rather than looking at it on a generic level. In other words, ‘he’s past 30, get rid.’”

So, teams are adapting, too.

“Coaches are now identifying ‘moments’ for the big players to burst into life to exploit weaknesses in the opposition, opportune moments of overload in attack and opportunities to use moments of brilliance in one-v-one situations,” Deeley says. “This is what we often see with the likes of Ronaldo, Messi, Salah and Lewandowski, where specific moments are identified for them and with their intelligent insights.

“Whether there is an extension of this to the ‘normal’ player remains to be seen, where younger, faster players with less mileage in the tank can replace them and fit into a relevant system.”

But there’s a more tantalising angle.

“Specifically, while physical abilities naturally decline, technical skills can actually improve,” McMillan says. “The most obvious example of this is Messi.”

He has added more attributes to his game. Experience can bring accuracy, measure and greater awareness. It is precisely why the ages of 28-29 used to be seen as a player’s peak. It was that sweet spot between physical fitness and mental understanding of the game. Now, with science capable of prolonging and honing the former, the latter might have even greater influence.

“A player could potentially be better at 40 than at 20 if trained the right way,” Dr Stride says.

That is what Liverpool must weigh up, but it is another area that the science is only starting to explore.

“This is an exciting area where the potential for big data, artificial intelligence and even new areas such as gene analysis might feature more and more in the future,” Deeley explains.

Liverpool don’t have access to that at the moment but do have access to a far deeper reserve of information on Salah than any of his potential suitors.

“Liverpool will know him so well,” Dr Stride explains. “They will have all the GPS technology, the number of sprints, successful dribbles, duals won… all of this sort of data is accumulating more and more and a general rule is the better the performance on these metrics, the better you are performing as a player.

“They will probably have trends where Salah is continuing to improve. That will be factored into his situation. A layperson will look at a purple patch and think, ‘he’s 29 years old,’ but there’s still probably more to come.

“In my opinion, they should still be doing their best to keep him.”

Salah already followed Ronaldo in physical discipline. He may yet follow him in effect, and that can point to a new trend for the game.