And so it comes down to the final day.

For 90 minutes on Sunday, each corner of Milan will hold its breath. Whether of the black and blue of Inter inside the San Siro or the red and black of Milan, the two institutions of Italian football have teed up a blockbuster finish to a fascinating season.

For those old enough to remember, only once before has Italian football seen the Milanese rivals fighting for title supremacy on the final day – back in the 1964-65 season.

Then, it was Inter, managed by Helenio Herrera, who held the advantage, a two-point lead over Milan. Inter got the point they needed in a 2-2 draw while Milan finally ran out of steam in defeat to Cagliari.

How poetic, in a way, that the tables have turned 57 years later. 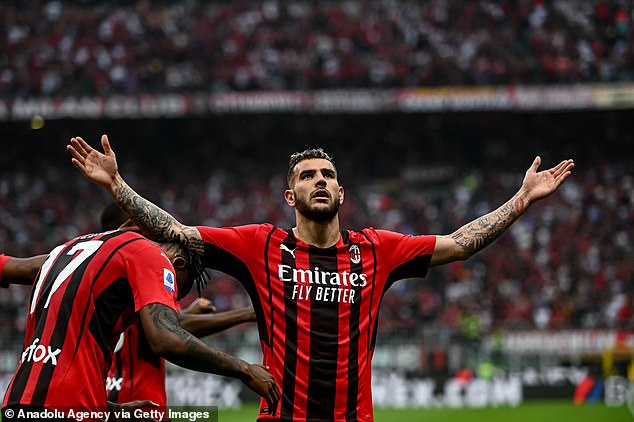 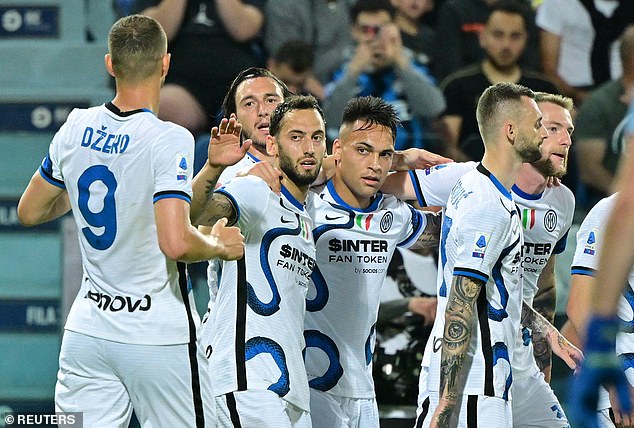 The two sides have only once before jostled for the title on the final day, back in the 1960s

Cynics of Italian football will point to the nine straight titles Juventus won between 2012 and 2020.

Only now, the pendulum of momentum is swinging to the footballing capital of Milan.

Inter and AC Milan have collected a total of 37 league titles from 120 editions of the Italian championship.

They go into the final day with very different experiences. Inter are looking to go back-to-back, albeit without manager Antonio Conte in the dugout. For Milan, they have not had a better chance to end their 11-year title drought than this.

There they had to be last season, hiding away and battening down the hatches as Inter’s triumphant support descended towards the Duomo to toast the Scudetto.

Now Milan know, take care of business and it will be they that are heralded on the shoulders of supporters as cult heroes.

What have they got to do to win the title?

In two out of three scenarios Milan are champions.

Win at Sassuolo and they win it by at least two points. Draw and they’ll win it either by goal difference or on head-to-head with Inter.

Milan drew 1-1 in their first meeting this season before defeating their rivals 2-1 in the reverse game.

For Inter, they need a helping hand, basically. 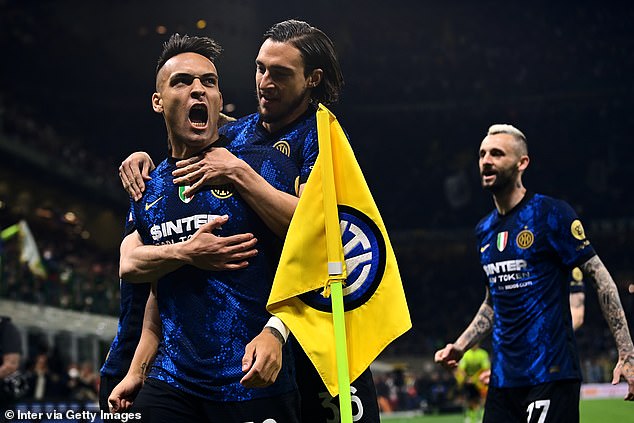 Inter Milan, the reining and defending champions, are the free-scoring side over last 10 games

The Nerazzurri will be expected to comfortably sweep aside Sampdoria – whose fans have spent this week parading the streets to celebrate the relegation of bitter rivals Genoa – and so expect someone on the Inter bench to be following events at Sassuolo with interest.

Inter have 81 points but given they are two behind and worse off on the head-to-head record, only a Sassuolo win over Milan can give them the golden ticket they need.

Don’t expect either manager to deviate much from what has worked so successfully in recent weeks.

The obvious question is: will Zlatan Ibrahimovic start? Don’t count on it.

At the grand old age of 40, Ibrahimovic is there for his experience and hasn’t started in the league since coming off injured in a 0-0 draw against Juventus back in January.

Olivier Giroud has more than held his own leading Stefano Pioli’s preferred 4-3-2-1 system and that is unlikely to change with the entire season coming down to one last 90 minutes.

Theo Hernandez is a man in form and Pierre Kalulu will again play alongside Fikayo Tomori with Simon Kjaer a long-term absentee. Those two could get their first title success at Milan and should they so desire, they could be the bedrock of this backline for years to come. 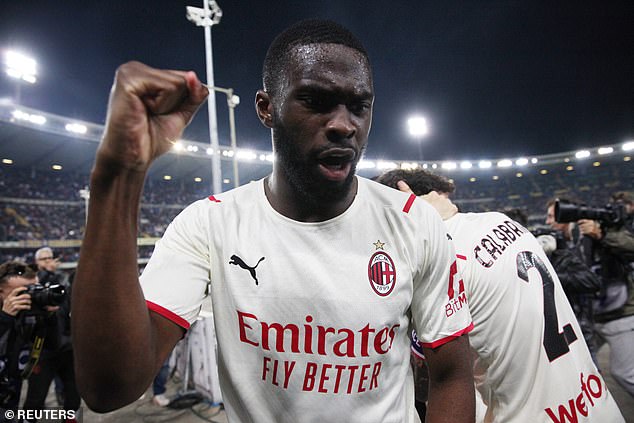 With Fikayo Tomori at the back, AC Milan’s defence has become the envy of the rest of Italy

Matteo Darmian and Ivan Perisic are locks in the wing-back roles while Nicolo Barella and Hakan Calhanoglu provide artillery and creativity in the midfield.

The question mark is whether Edin Dzeko gets a run out from the start.

Interestingly in Inter’s last home league game – a 4-2 rout of Empoli – it was Joaquin Correa that partnered Lautaro Martinez in a front two and it wasn’t the first time that partnership feasted on goals. That feels the big call for Inzaghi. 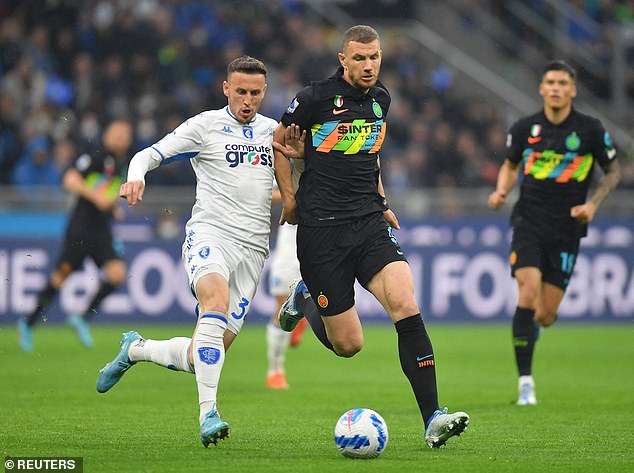 Mood in the camps

When you have to wait 11 years to win a Scudetto, Milan’s fans can be forgiven at going crazy on the eve of the drought ending.

For weeks now the loyal Rossonerri support have been like rabid dogs trying to will the team over the line. The Curva alive, in fine voice and a belief like this team has rarely seen in the last decade.

And while Pioli and many within the squad are trying to temper, for now, the passion –  ‘massima concentrazione‘ was the matter-of-fact wording on club social media channels – Ibrahimovic cannot help from getting swept up in it all.

Ahead of the game at home against Atalanta, Milan’s bus was made to crawl through the swathes of fans gathered outside at a snails pace. Drones showed the incredible level of support and turn-out.

As fans saw the bus past, there was Ibrahimovic, right at the front, banging on the windscreen to gee up the excitable fans even more… only he got so into it he smashed the bus’ windscreen. Sure he can afford the repair, mind you! 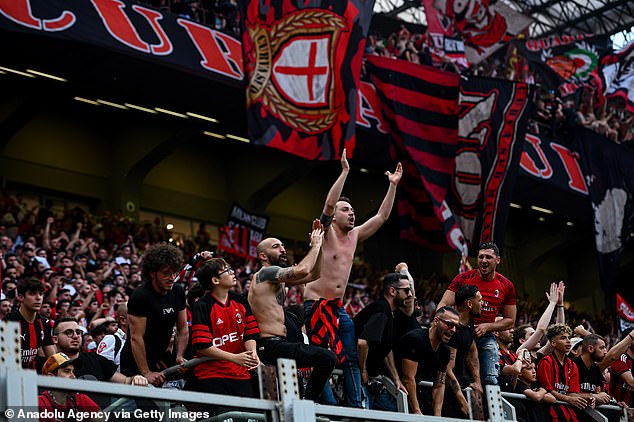 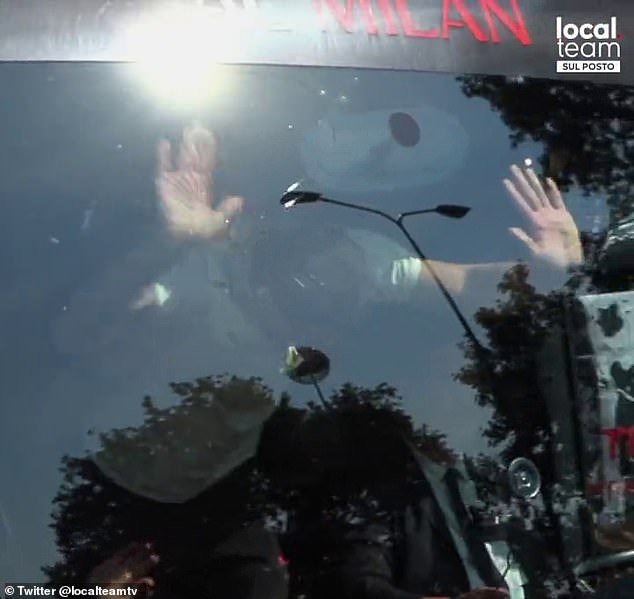 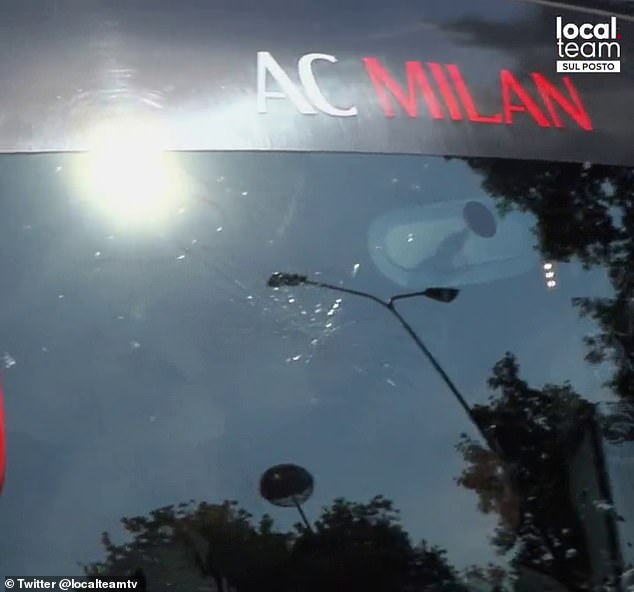 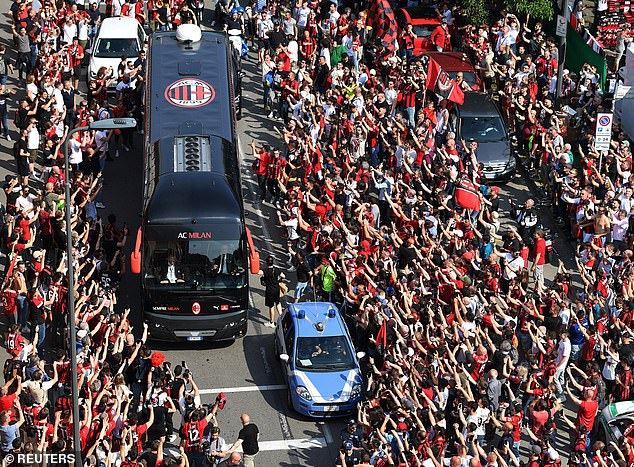 But for Inter this is a week not to worry because, frankly, what will that achieve?

They know Milan should see the job through from here. Defeat to Bologna recently was the moment some supporters felt the chase was up.

It’s still alive, just one Sassuolo goal could do the job, but for the players it has been about a week of unwinding and unburdening.

Following a recent training session the players, along with coaches, sat down to enjoy a meat-heavy BBQ.

Team bonding was taking precedence over traditional preparations prior to matches.

It’s been a long season and it may still end with the title for Inter but what the BBQ showed was that they will head into the final day with no fear whatsoever. 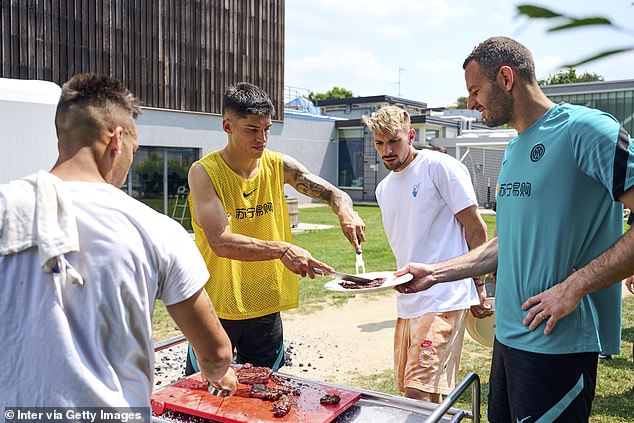 Over at Inter, they have been fine-tuning their final week with a team-bonding BBQ 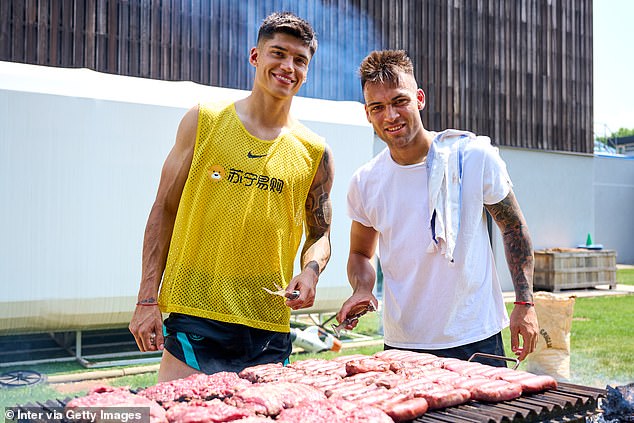 AC Milan have been impeccable for a while now but if we just take the last 10 games as a sample size, it reads: won eight, drawn two, lost none. Scored 13, conceded two.

Compare that to Inter who, outside of their 10 league games in this stretch did defeat Juventus to win the Coppa Italia final, won seven, drew twice and lost once, to Bologna. They’ve scored 21 and conceded 10.

So, first off, Milan’s defence has been impeccable for weeks, home and away.

Tomori has elevated into a Serie A-best centre back while Kalulu is proving he can be the long-term partner to the former Chelsea man.

Granted, Milan have not proven to be lethal scorers, averaging just 1.3 goals a game in this run.

But with a defence as mean as theirs is – and given the fact they only need a point – oddsmakers would not fancy Sassuolo’s chances of playing the party-pooper on Inter’s behalf. 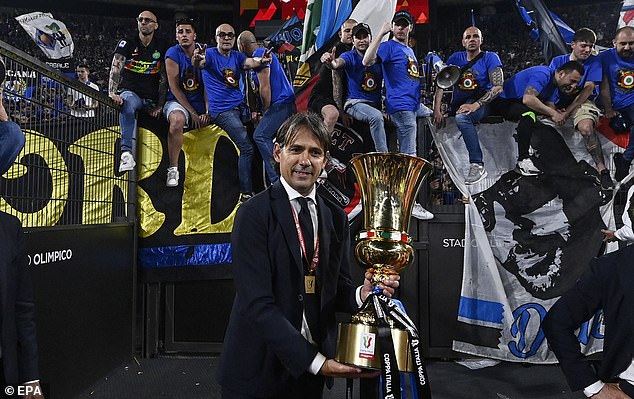 Inter have already got hands on silverware this season, having managed to win Coppa Italia

Who stands in their way?

Sassuolo at the MAPEI Stadium (11th)

Sassuolo have found there is life after former boss Roberto De Zerbi… who’d have thought it?

Alessio Dionisi has impressed in his first season in charge, particularly given Manuel Locatelli, their star man, was moved on to Juventus.

Milan head to meet a Sassuolo team that have nothing but pride to play for at this point. They are rooted to the middle of the table and while the stakes aren’t particularly high for them, it is their final home match this season in front of their fans, and nobody wants to see visiting teams claim titles and trophies on their patch.

Inconsistencies have cost Dionisi’s players more than anything and eight clean sheets in those last 10 matches we spoke of won’t instil much hope of an upset among neutrals.

But hey, Sassuolo have beaten Atalanta and Lazio at home, as well as holding Roma and Napoli to draws.

They even turned Milan over back in November with a 3-1 win. Admittedly, this Milan side were still finding their groove but take nothing away from a display that turned heads. Repeat that and Inter will have the final twist they crave so much. 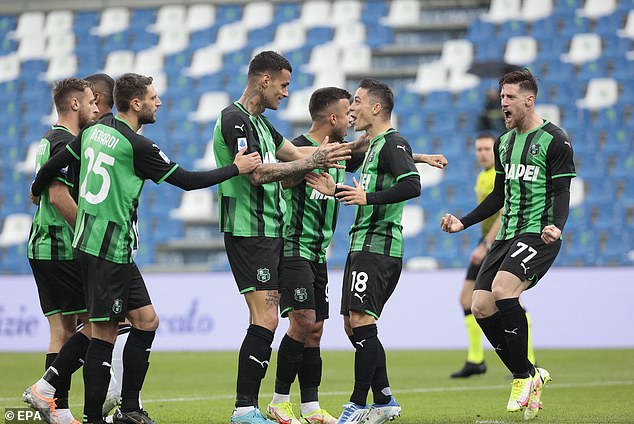 This one feels like it has far less jeopardy attached to it.

It is hard to effectively argue that Inter walk off the San Siro pitch with anything less than three points and a couple of goals.

About 100 miles away, Milan will be trying to take care of their business but against lowly Samp there are few realistic scenarios in which Inzaghi’s side fall flat.

Sampdoria’s 4-1 rout of Fiorentina deserved credit recently, ensuring their survival for another season.

But this is a bad team that will likely be lambs to the slaughter come the first whistle at the San Siro.

What would victory mean?

The obvious answer is a great deal.

But it is hard to argue that this moment is bigger for Inter than it is for AC Milan.

Not since having Massimiliano Allegri, now of Juventus, in the dugout have fans of Milan been able to soak up the feeling of being the Kings of Italy.

Milan, one of football’s great powerhouses, soon became swallowed by the Juventus dynasty and lost their way.

But little by little Pioli has rebuilt the club and the team to be one that is the envy of the rest of the league. Little things have made a difference and after beating Atalanta he showed his players a video from the late Kobe Bryant, who was incredibly well liked in Milan prior to his death in 2020. 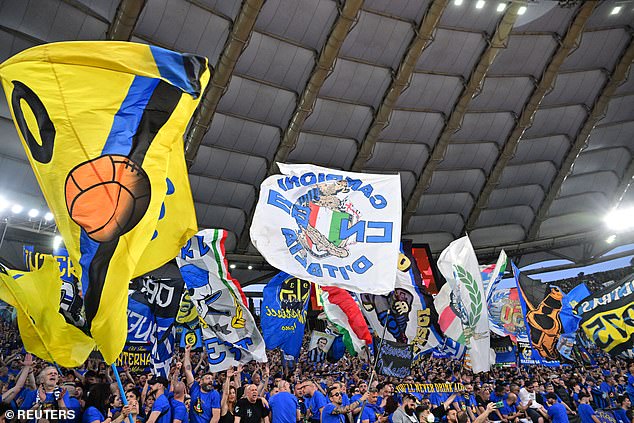 ‘I showed the lads an interview with Kobe Bryant, who said at 2-0 up in the NBA Playoffs, “the job is not done”,’ Pioli said.

‘We’re not done. We need to maintain that calm and concentration that can in the end prove decisive.

‘When we took charge at Milan, the team had completely different tactical ideals and concepts, so we had to change everything. Now the good thing is that the players enjoy making the most of our strengths and preparing tactically, being able to adjust also to limit our opponents.’

For Inter, supremacy, again, would help install a belief that they can go on to build a dynasty of their own. Without Conte and Lukaku, many wondered if Inter would fold, become a shell of the aggressors that dominated the league a season prior.

But here they stand, still in with a chance.

If the Premier League has got your attention, find another screen to follow the most epic of conclusions in Serie A, too.