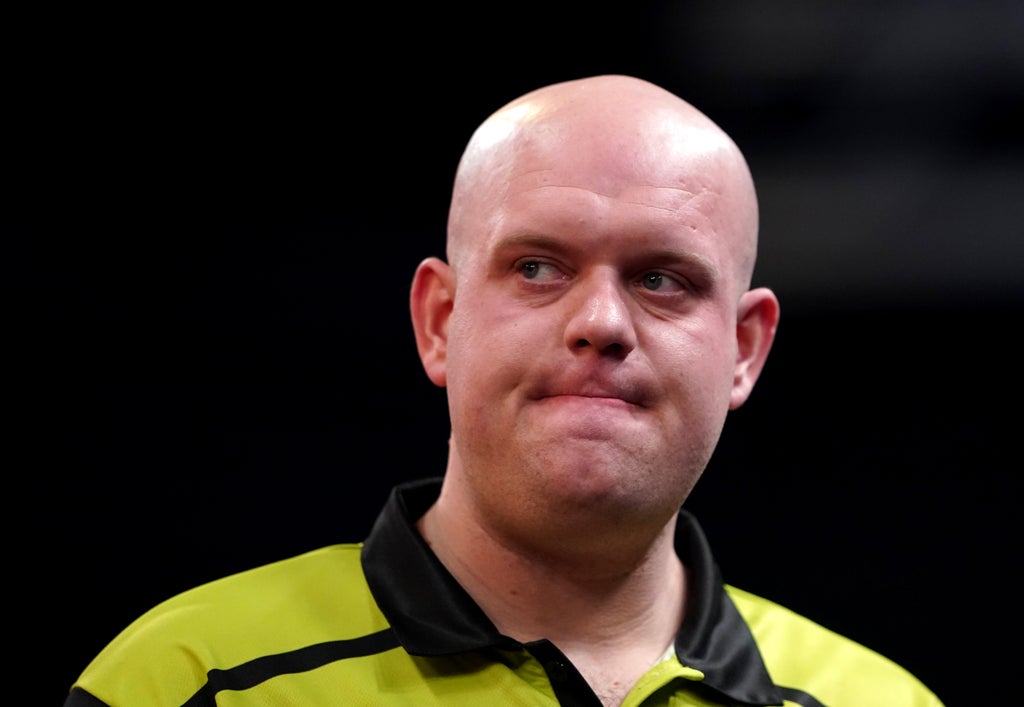 Michael Van Gerwen was knocked out of the World Grand Prix in the first round after losing in straight sets to fellow Dutchman Danny Noppert.

Van Gerwen, bidding to win the annual double-start tournament for a sixth time, lost both legs 3-2 in a heated encounter at the Morningside Arena in Leicester.

Three-time world champion Van Gerwen went agonisingly close to pulling off the first nine-darter to finish on a 170 in PDC history in the opening leg of the second set, but missed the bull.

Noppert then produced a 103 checkout to take the second set to a decider and at 2-2 Van Gerwen was made to pay for missing too many trebles.

In his post-match interview on the PDC’s official Twitter account, Noppert revealed there had been some angry exchanges between the pair during the match.

“I’m really happy with this win and my own performance, it was really good,” Noppert said. “But after the first set we had some troubles with each other.

“Every time I was on a double, he was stamping on the floor and after the first set we met each other backstage and had words with each other.

“It was my feeling about it, but I’m happy with the win. I just kept going.”

Jonny Clayton celebrated his 47th birthday with an impressive 2-0 win against Callan Rydz, landing six doubles from 10 attempts and losing just one leg.

Premier League champion Clayton, the world number 14, averaged over 95 and landed a 170 checkout on his way to the last 16.

Clayton said in his post-match interview on the PDC’s official Twitter account: “I haven’t stopped shaking to be honest, but job done, I had a tough opponent.

“I had my Nando’s, I love my Nando’s, but nobody bought it for me on my birthday, I had to pay for it myself! I can relax though now for a day or two.”

In a clash of former world champions, Rob Cross came out on top in a 2-0 victory against Peter Wright

Cross rattled off three legs on the spin after losing the opener to win the first set.

Second seed and reigning World Matchplay champion Wright had his chances in the second set, but Cross proved too clinical.

Cross said on the PDC’s Twitter account: “I played well. I was better in the first set, second set a little bit sluggish and never got away.

“In a tournament I’ve probably struggled in, I’ve got to be grateful. Peter’s a great player and been round many more years than me, but I’ll take the win and move on.”

White sealed victory with his ninth match dart in the deciding leg after Anderson had levelled it up at 2-2 with the help of two 180s.

“I’m happy to go through, but I don’t think it was a classic,” White said. “The two of us are good friends. We go fishing together, so it was hard work.”

Krzysztof Ratajski secured his first win at the World Grand Prix at the third attempt after coming from a set down to defeat world number 10 Nathan Aspinall 2-1.

Ratajski said: “I’m very happy. It was one of the hardest matches in my career. It was really hard for me and I’m glad that I won.

“Nathan Aspinall is a class player. He’s one of the best players in the Premier League, so I’m happy.”

In the evening’s final match, Portugal’s Jose De Sousa raced to a 2-0 win against Glen Durrant, who struggled throughout and won only one leg.