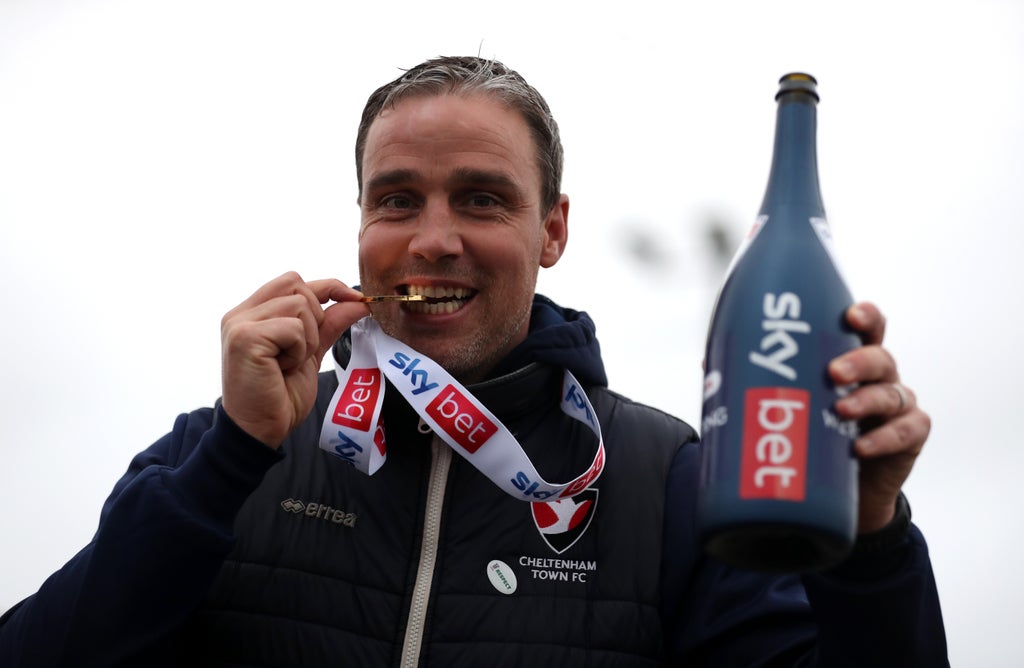 No one can accuse Michael Duff of sleeping on the job.The Cheltenham boss may have been listening to a professor of sleep recently but he knows there is no substitute for hard work.

In the past year he has won the Robins’ first ever league title on a shoestring budget, watered the training pitches, given Pep Guardiola a scare and continued his studies.

He is currently writing a dissertation on managing stress as part of his LMA diploma in management which has helped him finally strike a work-life balance in football’s spotlight.

“It’s called the ‘evaluation of my personal effectiveness’, it’s really stress management and how you deal with it. We’ve also had a professor of sleep come in and talk to us about how important sleep is.

“You spend 38 per cent of your life sleeping but only 19 of your life working so why would you spend all this time on 19 per cent but nothing on the 38? It’s not going to help you win a football match but it might help you prepare better.

“Even this summer, we had just won the league, I never gave myself any time.

“Lower league managers have different pressures to Pep Guardiola. He isn’t watering the pitches during pre-season but he still has to win.

“At the level we’re at you’re almost like Jack of all trades. Sometimes it’s difficult to get out of the building.

“Now I give myself an hour a day. I’ll go to the gym or in pre-season I’d hit a few golf balls just to give myself some time.

“Sometimes you need a straightener from the Mrs (Jessica) and she’ll go: ‘oi, get back in the room’ because you’re there but you’re not. My full time job is to be a dad and a husband, that’s just as important.

Management was not always goal, though. A career-threatening knee injury while playing for Burnley against Crystal Palace in 2007 changed Duff’s perspective.

With just three GCSEs he was concerned about the future and started his coaching badges, which eventually saw him become Burnley’s Under-23s manager in 2017, having been Under-18s boss following retirement a year earlier.

Cheltenham then approached their former defender – who made 240 appearances for the club – in 2018 with an offer he could not reject.

“I didn’t want to be the 50-year-old bloke in the pub saying, ‘I could have done this’. Well, did you ever do it? No,” said Duff, who won promotion to the Premier League three times with Burnley.

“I didn’t want to turn the opportunity down and have ‘what if’ moments for the rest of my life.

“We were 21st in League Two and I didn’t win for 10 games. It was a learning curve but people like Dychey were fantastic because he was on the phone two or three times a week.

“He thought I was mad initially, walking away from the club, but I wanted that opportunity to have a go.

“As a first time manager who didn’t win for 10 games, the only remit at the time was ‘don’t get relegated’ but my career could have been over before it started.”

The calculated risk paid off and, after saving Cheltenham from relegation and losing in the League Two play-offs in the Covid-hit 2020-21 season, Duff guided the Robins to the title last term.

It was the first time in their history they have been promoted automatically, despite having one of the lowest budgets in the division.

They also gave Manchester City a scare in the FA Cup in January, eventually conceding three goals in the final nine minutes to lose 3-1 after Alfie May’s opener.

Financially, Cheltenham are still punching above their weight and sit 16th in League One – the highest the Robins have ever finished is 17th in the third tier.

Success has come at the Jonny-Rocks Stadium and, while the former Northern Ireland international is happy, he has a desire to go further.

“They (his ambitions) are exactly what they were as a player, ” said the 43-year-old. “There shouldn’t be any embarrassment about that. I’m a young manager, I want to go higher, I respect where I am but there’s always going to be a desire to try to improve.

“It’s difficult to say without sounding arrogant. I’ve got a saying: ‘hard work pays you back’.

“It might not happen, this might be the highest I ever get in my managerial career but it won’t be through lack of effort. I will go to my grave knowing I’ve given it my best shot.”