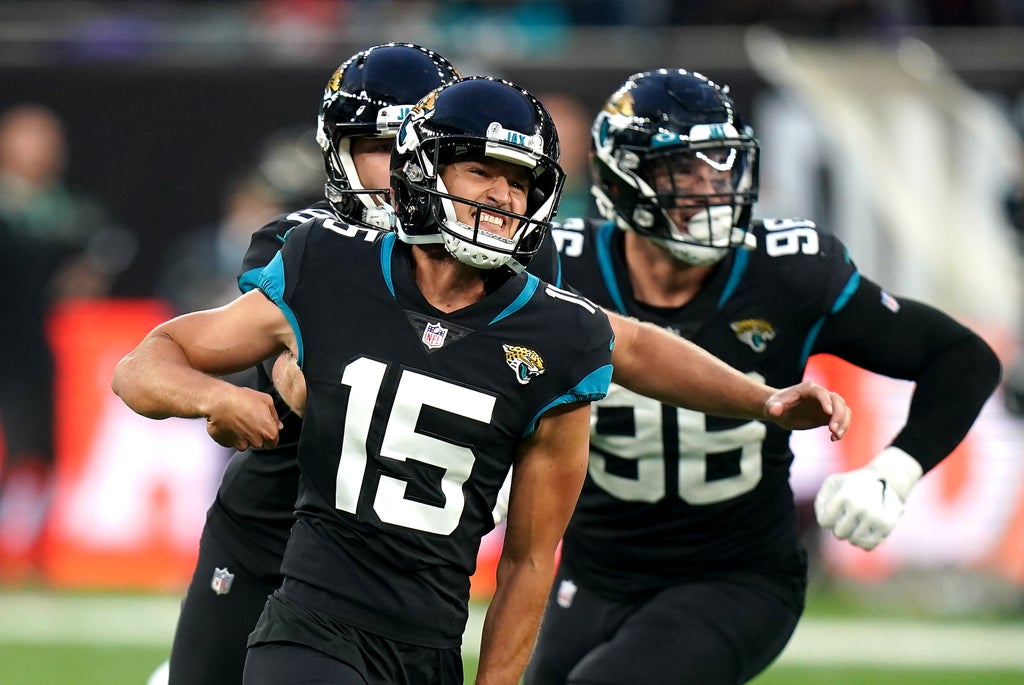 A week on from the Atlanta Falcons overcoming the New York Jets, the Tottenham Hotspur Stadium was again packed to the rafters as the NFL London Games double-header came to a thrilling conclusion.

Both teams needed a shot in the arm after poor starts to the season and the Jaguars grabbed their chance, ending their 20-game losing run by beating the Dolphins thanks to Wright’s field goal at the death.

There were wild celebrations after Jags quarterback Trevor Lawrence – the first pick in this year’s draft – and head coach Urban Meyer secured their first NFL wins on an afternoon that looked to be heading the Dolphins’ way.

Jaylen Waddle opened the scoring as Miami quarterback Tua Tagovailoa returned strongly from a rib injury, but Lawrence found Marvin Jones Jr for a touchdown late to bring the score within three at half-time.

Star running back James Robinson added another Jags touchdown but Waddle responded with his second of the day and the game looked to be heading to overtime after Wright drew the score level with a 54-yard field goal.

But, having failed to score a field goal in their first five games, the little-known kicker hit a last-second winner from 53 yards.

The Dolphins had started well as they looked to end a four-game losing run, with returning Tagovailoa making some smart decisions during an opening drive that ended in a Waddle touchdown. Jason Sanders added the extra point.

Lawrence attempted to lead his side straight back up the field but tight end Dan Arnold dropped a key pass as the Dolphins restricted the Jags to a Wright field goal.

Tagovailoa continued to impress but the Dolphins were failing to make promising moments count, with Sanders field goals from 33 and 24 yards all they could add before the Jags showed signs of life.

Some bold play saw Lawrence convert a fourth down, allowing him to launch a 28-yard bomb that Jones Jr brought in superbly. Wright’s extra point meant the Jags were within three at half-time.

Meyer’s men maintained momentum after the break. Some fine Lawrence completions were followed by a scintillating 24-yard Robinson run just short of the goal-line, setting up the running back to bundle home a touchdown.

The sides traded turnovers and the Dolphins drove down the field, with Waddle celebrating his second touchdown of the day when grabbing a two-yard pass in the fourth quarter.

The Dolphins saw two challenges rejected as play became tense, with Wright drawing the game level with a curling 54-yard field goal – an effort that looked set to send the game to overtime.

But the decision for Lawrence to send a quick low pass to Laviska Shenault Jr and then a quick time out gave Wright the chance to hit a 53-yard winner.