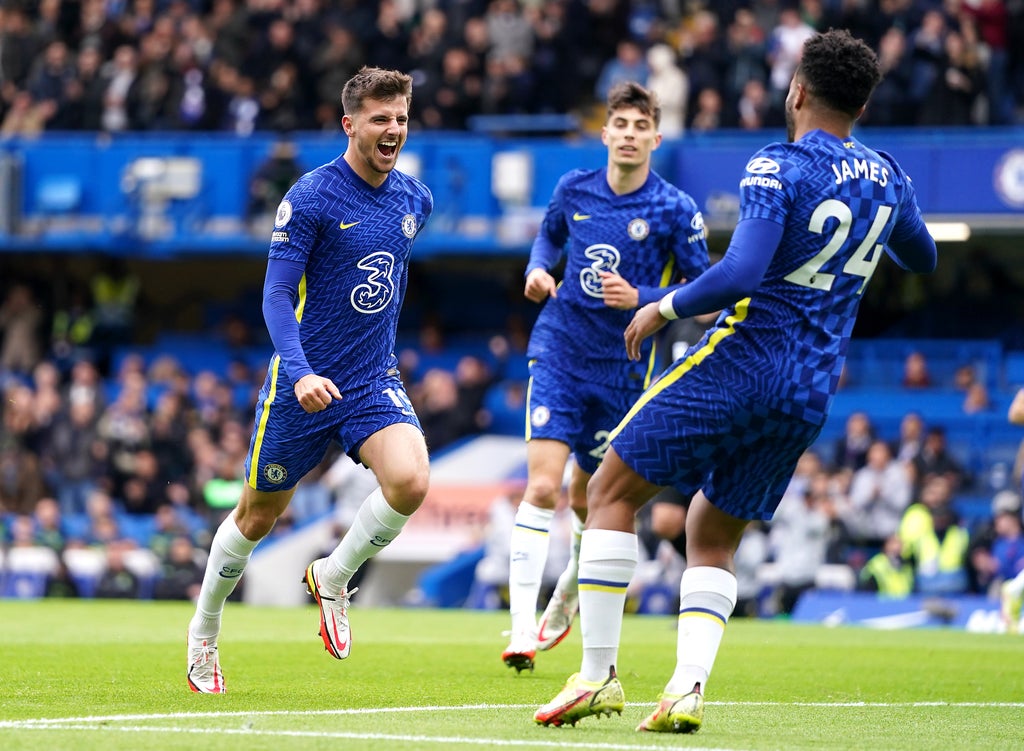 England left-back Ben Chilwell then drilled in his fourth goal in five games for club and country, Max Aarons put through his own net and the Canaries had Ben Gibson sent off for two yellow cards.

Mount converted an 85th-minute penalty at the second attempt, failing with his first effort only to be reprieved by Tim Krul moving prematurely off his line.

And right at the last, England star Mount tapped home from Ruben Loftus-Cheek’s cross to walk off the field with the match ball.

The Blues’ Cobham academy filled the void with aplomb, however, with youth graduates Mount, Hudson-Odoi and James all on target.

Chelsea’s seventh win in nine games ensured boss Tuchel’s side will sit top of the table at the end of the weekend, whatever happens to high-flying chasers Liverpool and Manchester City.

England man Mount lashed home from 18 yards to kick-start the Chelsea cakewalk, with basement club Norwich never threatening to find their first win of the campaign.

Mount broke a 15-game drought with his opener, before Hudson-Odoi ended his own 27-game dry spell – for his first Chelsea goal under Tuchel.

Mateo Kovacic laid on two assists in an entirely dominant Blues performance – that took Chelsea’s tally of different scorers to an English league football high of 17 in all competitions for the season.

Norwich were overwhelmed, outgunned and out of their depth.

The Carrow Road club’s loyalty to Farke and long-term vision merits respect, but the toll on their outclassed players is already evident just nine games into this Premier League campaign.

Chelsea were always in control. Norwich invited the Blues forward from the off, and Tuchel’s team never require a second request.

The Canaries failed to clear an early Blues attack, Mount steadied and then lashed the ball – and the hosts were 1-0 up.

Thiago Silva cut out a rare but predictably tentative Norwich attack, and just one pass later the Blues were in on goal again.

Kovacic threaded the ball through acres of space to Hudson-Odoi, and the calm left-winger took all the alarming time afforded to him to slot past the helpless Krul.

Chelsea’s supremacy was long since secure by the time James delivered a deliciously deft finish, lifting over Krul to put Chelsea 3-0 to the good before half-time.

Mount’s fine ball begged for James to hit the overlap, and the England full-back did far more than just that, latching onto the pass and finding the net in stunning fashion.

Mendy was once called into action to start the second half, the Senegal stopper blocking Milot Rashica’s effort after the Blues lost possession cheaply.

Normal service quickly resumed, though, when Kovacic fed Chilwell and the England full-back drilled into the bottom corner to push Chelsea into a 4-0 lead.

Aarons then turned Hudson-Odoi’s cross into his own net for the Blues’ fifth, and then Norwich’s nightmare deepened still further when Gibson was sent off.

The Canaries defender scythed straight through James and was rightly given his marching orders with a second yellow card.

Just when Norwich thought their nightmare would drift to a close, Mathias Normann handled Toni Rudiger’s shot in the box and Chelsea were awarded a penalty.

Mount’s initial effort might have been saved by Krul, but he was handed an immediate reprieve with a re-take, which he buried.

Midfielder Loftus-Cheek then beat the offside trap to boot, to lay Mount’s hat-trick goal on a plate.