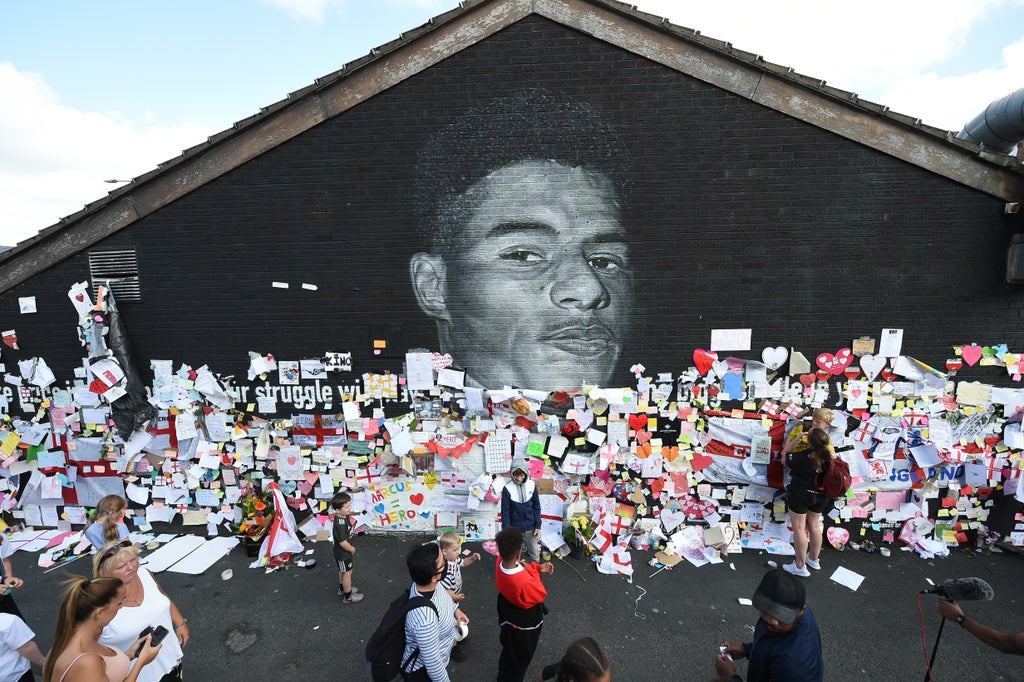 A close-up of the Marcus Rashford mural in Manchester will be available to view in Google Street View in a celebration of the football player for Black History Month.

The mural paid for by Withington Walls, a community street art project in Withington, South Manchester, was painted by street artist Akse P19 in recognition of the footballer’s work to tackle child poverty.

It was vandalised after Rashford missed a penalty in England’s defeat to Italy in the Euro 2020 tournament.

In the days following, it was decorated with messages of love and support for the 23-year-old footballer which are now available to see close-up on Google Street View.

It coincides Tuesday’s England match against Hungary, whose fans are not allowed to attend following previous incidents of racism.

In September, Hungary was fined £158,000 and was ordered to play their next matches behind closed doors after fans targeted England players Raheem Sterling and Jude Bellingham with racist chants.

The mural project is in collaboration with the Manchester Art Gallery, the National Football Museum, the University of Manchester and others, and is amongst many images that celebrate black British culture for the cultural heritage month.

Lara Crossley, head of content at the National Football Museum said: “Over the past eighteen months, Marcus Rashford has shown the remarkable impact that footballers can have off the field. When his mural was vandalised post-Euro 2020, the outpouring of love and support for one of South Manchester’s own was breathtaking.”

She added: “As a football museum based in the heart of Manchester, we’re immensely proud to share Marcus’ story, with our partners at Google Arts and Culture and in our galleries.”

Mr Rashford is also collaborating with Google on ‘‘The More We Learn, the Closer We Get’ search campaign, which attendees of today’s England versus Hungary game will also be able to see.

On the campaign, Mr Rashford said: “I’ve often felt that discrimination stems from a lack of education and a reservation to just ask questions and gain an understanding. We too often hush up children when their curiosity emerges in uncomfortable settings but much of the time bias can be countered by that ability to get that curiosity off your chest.”

He added: “It’s important that we open up these forums for children particularly, so that moving forward differences can be celebrated and championed, as opposed to singled out negatively, and I’m happy to see Google taking the lead on this.”

Rashford’s mural, and other celebrations of black history, art and culture are available to view on Google’s Black and British Hub.