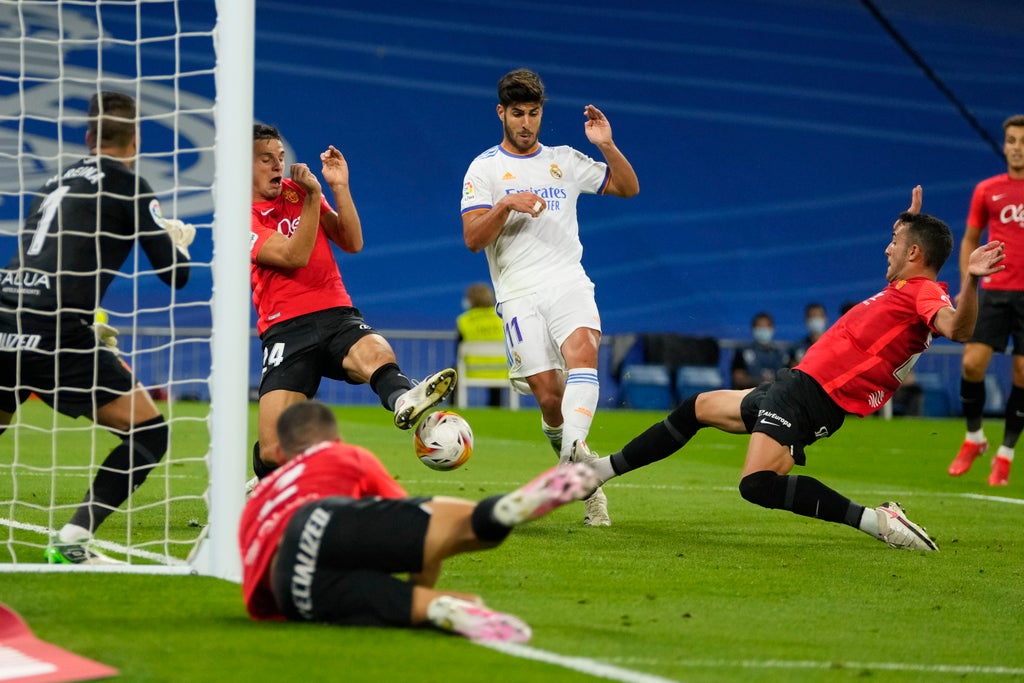 A Marco Asensio hat-trick saw Real Madrid hit six in a thrashing of Mallorca to return to the top of LaLiga.

Karim Benzema and Isco also found the net for Carlo Ancelotti’s side in a 6-1 win at the Bernabeu but it was the Spanish international who had featured in the Olympics last month who stole the show.

Against his old club, Asensio refused to overly celebrate his landmark night but made the most of a first start of the campaign to help knock Atletico Madrid off the summit.

Sevilla are in third after three goals inside 22 minutes helped down Valencia 3-1 while Europa Cup winners Villarreal claimed a maiden win of the league season.

Arnaut Danjuma and Alberto Moreno found the net in a 4-1 triumph over Elche for Unai Emery’s men and Espanyol edged out basement club Deportivo Alaves by a 1-0 score.

The right-back opened his account for his new club after five minutes but that effort was cancelled out by Kiki Kouyate to ensure the score was level at the break.

With Lionel Messi absent due to injury, Mauricio Pochettino turned to Angel Di Maria and Julian Draxler from the bench but it was Hakimi who produced the goods.

Neymar picked out the Morocco international with a wonderful through ball and he cut inside before he fired into the bottom corner with Metz, who had Dylan Bronn sent off in stoppage-time, still winless and propping up the table.

The other clubs in the top four were unable to win after Angers and Marseille played out a stalemate in the clash between second versus third while Lens suffered a 1-0 loss at home to Strasbourg to ensure PSG hold a seven-point advantage at the summit.

Xherdan Shaqiri was on target in Lyon’s 3-1 victory over Troyes and Lorient got the better of Nice thanks to Thomas Monconduit’s first-half effort.

Wissam Ben Yedder struck a brace to help Monaco clinch a second win of the season, beating Saint Etienne by a 3-1 score after England-born goalkeeper Etienne Green was sent off with 27 minutes gone to leave his side second bottom.

Champions Lille also started to show signs they were back on track after Burak Yilmaz picked up two assists in their 2-1 win over Reims while Nantes edged a four-goal thriller with Brest, who are the other side in the relegation zone.

Montpellier and Bordeaux shared the spoils after a 3-3 draw and there were also six goals in the game between Rennes and Clermont Foot but all of them went to Rennes.

Brahim Diaz was on target for AC Milan in a 2-0 victory over Venezia which took them back level on points with Serie A leaders Inter Milan.

Theo Hernandez wrapped up the points with eight minutes left for Stefano Pioli’s men and Juventus were also victorious for the first time this season in the division.

A 3-2 win at Spezia ensured Massimiliano Allegri got off the mark at the fifth time of asking in Serie A since his return to Turin.

Moise Kean, Federico Chiesa and Matthis de Ligt helped Juventus come back from 2-1 down while Empoli triumphed at Cagliari and new boys Salernitana earned a first point following a 2-2 draw with Verona.