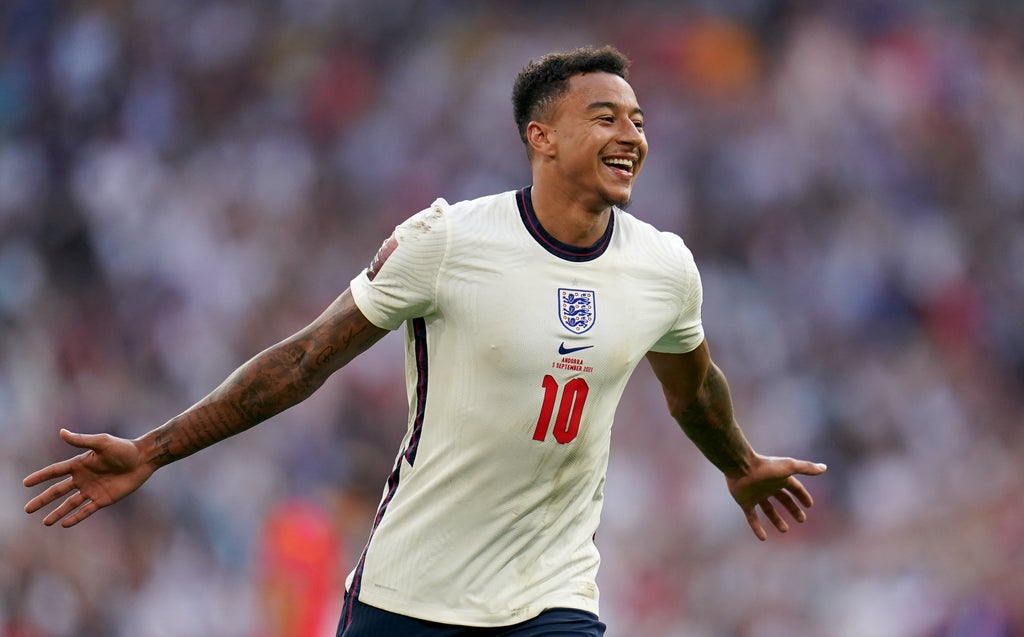 Jesse Lingard admits he needs “regular football” if he is to achieve his ambition of playing for England at the 2022 World Cup.

The Manchester United forward has played just 45 minutes of Premier League football so far this season, coming off the bench on three occasions.

He scored against both Newcastle and West Ham, hitting a late winner at the London Stadium having spent the second half of last season on loan to the Hammers.

A fine spell in east London saw Lingard included in Gareth Southgate’s preliminary squad for Euro 2020 but he would ultimately not make the cut.

Lingard has been retained in the squad for the reverse fixture on Saturday and the subsequent visit of Hungary three days later.

But he concedes he needs to be playing regular first-team football to keep his place in the squad and earn a spot in Southgate’s squad for Qatar next year.

“Obviously, the World Cup is a long way away but… you need regular football,” he said.

“I was so close to going to the Euros and I think obviously it plays a huge part and it’s a big factor. If you’re playing over 20 or 25 games, of course you know you’re knocking on the door so I think it does play a big part in that.

“I’m not doing any harm at the moment – if I keep performing well and doing well you never know what might happen so I keep confident in myself and when I get when I get time on the pitch I’ve got to carry on doing what I’m doing.

“It’s one of those things I’m going through at the moment but I think on recent performances hopefully we’ll see a change in the next few weeks.”

Lingard insists missing out on a place in England’s run to the final of Euro 2020 is also driving him to earn a place in Southgate’s World Cup squad – should the Three Lions sew up qualification.

“Yes, it gives you more hunger and motivation to be playing in the biggest of tournaments and games,” he replied when asked if missing out on England’s run to the final of Euro 2020 drove him on.

“It’s always hard. Considering where I was for a period of time, not playing as much and not in the England squad, to get into the 33-man squad shows what you can do with hard work and belief.

“I was disappointed to miss out but I was still there supporting the boys through thick and thin.

“They had a great chance after getting into the final but we have to move on quickly and prepare for the new season.

“I’ve been with England for many years and I’ve seen camps change over the years but at the moment I think the camps I’ve been at now are one of the best.

“The togetherness and the team spirit, Gareth’s really got us set up right. The games we’re going into, there’s real confidence and we’re trying to obviously get through the qualifiers.”

While Lingard has been largely sidelined at United this season, his new club-mate Jadon Sancho has failed to hit the ground running since moving to Old Trafford from Borussia Dortmund this summer.

The 21-year-old was racially abused on social media after missing a penalty in the Euro 2020 final shoot-out defeat by Italy.

Southgate admitted last week that Sancho’s form since joining United was not worthy of an England call-up but that he wanted to show continued belief in the winger.

“I think it’s going to take some time to adapt,” Lingard said of Sancho.

“Jadon’s been around long enough, he knows football inside out and the Premier League can be tough. He’s adapting. We’ve seen glimpses. He’s only going to get better. We have full confidence and hope in Jadon to succeed.

“We all know Jadon’s a world-class player, and one of the best young talents in the world at the moment. At a big club like Manchester United it is always going to be pressure.

“But Jadon is a professional, has been around the game a long time and I feel like he’s slowly adapting now and you can see glimpses of that in the previous games that he’s played.

“We can see that in in training week in, week out. There’s no doubt that he will succeed at United, I’ve got full confidence in that.”