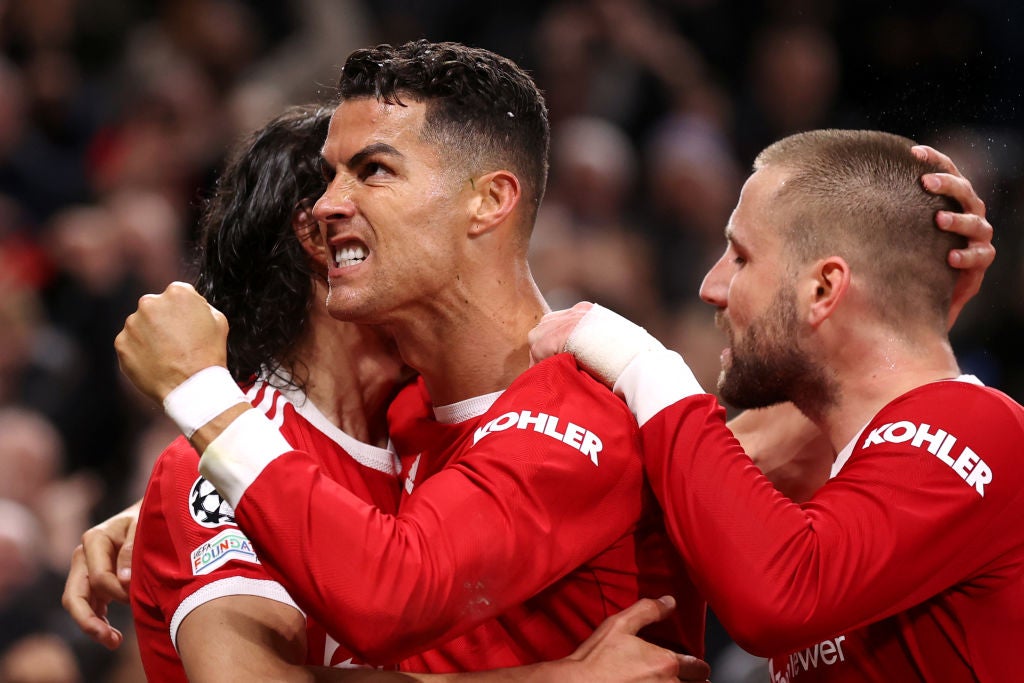 It was the sort of script that is loved at this club, but it’s impossible to escape the feeling this one was used to paper over cracks that are by now huge gaps.

Ole Gunnar Solskjaer will doubtless put this down to the spirit and soul of the club, and it is true to say that this 3-2 win over Atalanta again showed that this team are at the very least playing for their manager. Cristiano Ronaldo offered yet another late match-winning moment, on another raucous European night.

It was just that this victory was as much down to the willingness of a depleted Atalanta side to persevere with their approach to the point that risk became recklessness. Gian Piero Gasperini’s one-on-one approach gave United countless opportunities, that they were eventually going to take up.

Another truth is that, as bad as this game was at half-time, United probably should have won about 8-2 rather than 3-2 by virtue of the chances created. They missed so many.

Or perhaps that should be 8-3, since David De Gea made yet another crucial and brilliant save from Duvan Zapata with the score at 2-2.

It felt so significant in the very moment of the stop, especially since it had such echoes of what happened against Villarreal – right down to what eventually happened.

But that is why, even allowing for the fact United are now top of the group and surely en route for the last 16, it feels wrong to talk about this as any kind of turning point.

The Villarreal moment didn’t exactly prove a prod for anything more. It saw them sink into the same old issues. Except, by now, there are more than just the same old problems like lack of attacking structure or coherence.

This entire match was the second successive game that was basically a signal to everyone else to always play wing-backs at United. Solskjaer hasn’t figured out how to play against them. His teams, effectively forced into always funnelling a shape towards Ronaldo, just leave so much space on the flanks. Since both wide forwards – in this case Marcus Rashford and Mason Greenwood – have to make up for the Portuguese’s pressing, they are usually caught too high forward. The central midfielders meanwhile can’t vacate the centre, which ensures opposition sides have so much space to run into. Trent Alexander-Arnold and Andy Robertson should be relishing this prospect on Sunday.

Atalanta enjoyed themselves in the time they had to attack here. Except, for the first, it’s not like they had to push themselves. The opening goal was almost casual. Luis Muriel was afforded even more space to just play the ball back to Josip Ilicic, who so easily picked out Davide Zappacosta. He flashed the ball across for Mario Pasalic to finish.

A murmur once again went around Old Trafford, but these complaints are by no means new. There was then the manner of the second. It was the fifth set-piece goal United have conceded this season, and this may well have been the simplest. A corner was swept in for Merih Demiral to head in first-time.

It was emphatic, but should have been cut out. Questions can again be asked about Solskjaer’s starting line ups. It again felt like an area Harry Maguire should be covering, although the centre-half eventually showed a different value.

There remain profound team concerns that shouldn’t be glossed over amid the glory of another European night. As against Leeds, United were fortunate that Atalanta are a rare side who are so willing to play into their feet – even as Solskjaer’s team so often seem prone to pointing a gun there. The Italians were no stranger to that. Rashford’s initial goal came from a speculative Atalanta pass towards their own centre-halves.

United had countless chances to win the game a few times before the comeback, and a second half that mostly saw them lay siege in vintage fashion. There was Rashford repeatedly getting in behind, his chance before half-time, Fred’s shot wide, Ronaldo’s one-on-one and Scott McTominay hitting the post. Sheer force of numbers indicated a goal was inevitable.

Rashford showed the certainty that defines his game at its best with a goal. Maguire displayed the resilience that is one big reason why Solskjaer is always so determined to have him in the team.

There was Ronaldo’s winner.

The line will be of another one of those nights – but that’s actually becoming the problem. They can’t keep suffering too many of these days. United are constantly chasing the problems inherent to their structure, looking to always overcome what perpetually undercuts them. It means the script is so often similar, even if the show is impossible to take your eyes off.

Whether that means this season becomes a bigger comeback or a car crash remains to be seen.

The script of the season doesn’t seem as predictable.