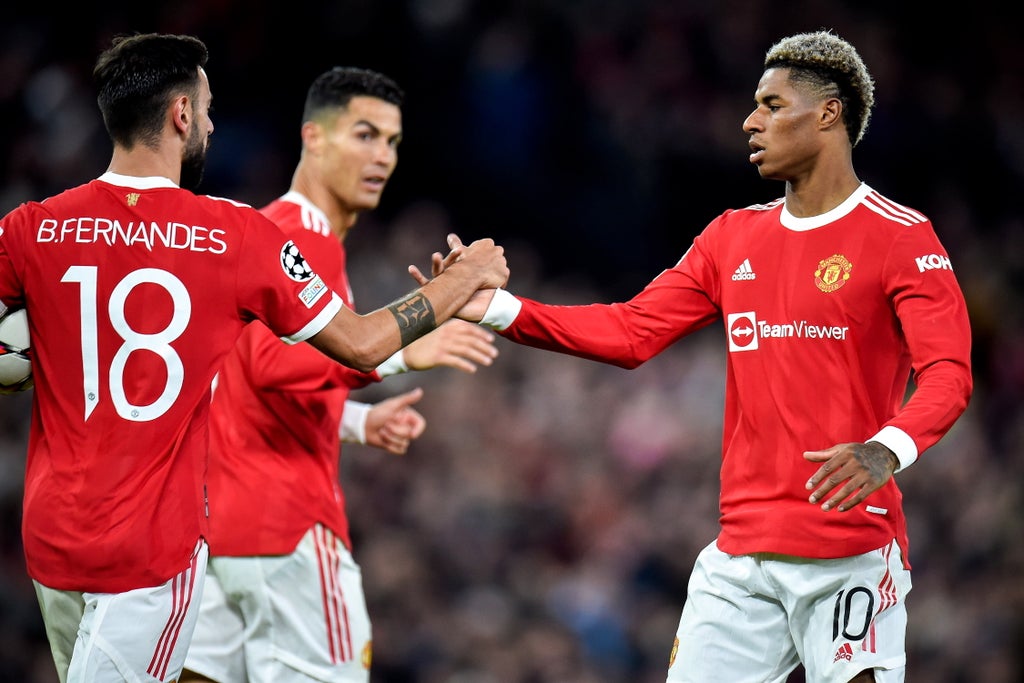 Manchester United came from two goals down to beat Atalanta 3-2 in the Champions League on Wednesday night.

The game couldn’t have started worse for Ole Gunnar Solskjaer as his team were cut open with a sweeping move down the right and Mario Pasalic tapped home the opener. After half an hour it got even worse, with Merih Demiral getting to a corner delivery first to plant a header past David de Gea.

United’s supporters grew increasingly frustrated as the half went on and booed the team off the pitch at the break – after Marcus Rashford had struck the crossbar with the final effort of the first 45.

Cristiano Ronaldo missed a fantastic chance to pull one back just after the restart, but Rashford made no mistake soon after as he found the bottom corner. United pushed for an equaliser and found it through Harry Maguire’s volley, but they were indebted to a brilliant David de Gea double save just prior to the captain’s strike. The home side continued to press for a winner and Ronaldo powered in a header late on to seal the points.

Here are five things we learned from the match at Old Trafford.

Tracking anybody’s runs, in fairness. But in particular, United simply failed over and over to follow the runs of Joakim Maehle and Antonio Zappacosta, allowing simple through-balls down the channel to split their defence apart again and again.

The first goal came from such a move and it was repeated on both flanks with some success, while Teun Koopmeiners was often ignored running centrally from deep, too.

United’s quality on the ball and capacity to fashion match-winning moments has rarely been in doubt; organisation off the ball and how to stop opposition creating bucketloads of their own chances is more the issue for Solskjaer.

Leicester did it at the weekend, Atalanta did it here and nobody really took responsibility for stopping it, be it those on or off the pitch.

He wouldn’t have wanted to be out injured of course, but it looks as though the enforced rest – and the chance to be back to peak physical fitness – has done Marcus Rashford the world of good.

The striker scored again here, a well-taken finish into the far corner, and had two or three other attempts which could have yielded further reward.

But more than his end product, it’s his movement which is most telling in terms of getting back to his best: Rashford was rapid, sprinting in behind the defence whenever the chance arose, moving freely and not just in straight lines, clearly confident in his abilities and intent on doing significant damage whenever the ball came his way.

He did depart the pitch with a bit of a limp midway through the second half and United will hope it’s not a serious issue as he gets back to top speed and top form.

Goalkeepers shine despite five going past them

A 3-2 doesn’t generally sound like the kind of night that sees those between the sticks shine, but both David de Gea and Juan Musso show their worth on multiple occasions.

Ultimately, the biggest contribution was the forceful double-save from the Spaniard, denying Duvan Zapata and Ruslan Malinovskiy in quick succession with the game still very much in the balance, moments before Maguire rattled in the equaliser.

De Gea has had a tremendous start to the season – itself indicative of United’s struggles in organisation – and that continued here.

Musso, on the other hand, made numerous one-on-one saves to keep his team ahead and then on level terms, but could do absolutely nothing about Ronaldo’s powerful late header.

His team faced boos from the stands – loud ones. That was at half-time, and that came after roars of frustration and demands for the team to play quicker, better, during the first half itself.

Did Solskjaer find the right approach eventually? Perhaps he’ll suggest so, but it’s hard to argue against the fact Atalanta’s go-and-keep-going gameplan also having a huge role in the fact they didn’t simply shut United out of the game once two goals to the good.

Again, individual moments created the goals, rather than patterns of play which are recognisably ‘United’ or are repeated from game to game, other than the cross to Ronaldo’s head.

A really tough run of fixtures lays ahead for Solskjaer to navigate.

Next up in fact for United is the small matter of facing an in-form Liverpool, at home in the Premier League.

They also play Tottenham, Man City, Chelsea and Arsenal within the next six league fixtures, a crucial run for their title aspirations or top-four ambitions, whichever it is that the club truly feels they are playing for this season.

Beyond that, this victory was big for the Champions League group stage; at the break United were bottom of the quartet, by full time they sit top at the midway point. If they can follow up this win with another in Bergamo, the last 16 is suddenly within touching distance.

As for Atalanta, they’ll feel disappointed at the dropped points no doubt – but the group remains tight enough that they’ll feel they, too, can do enough to reach the knockouts.