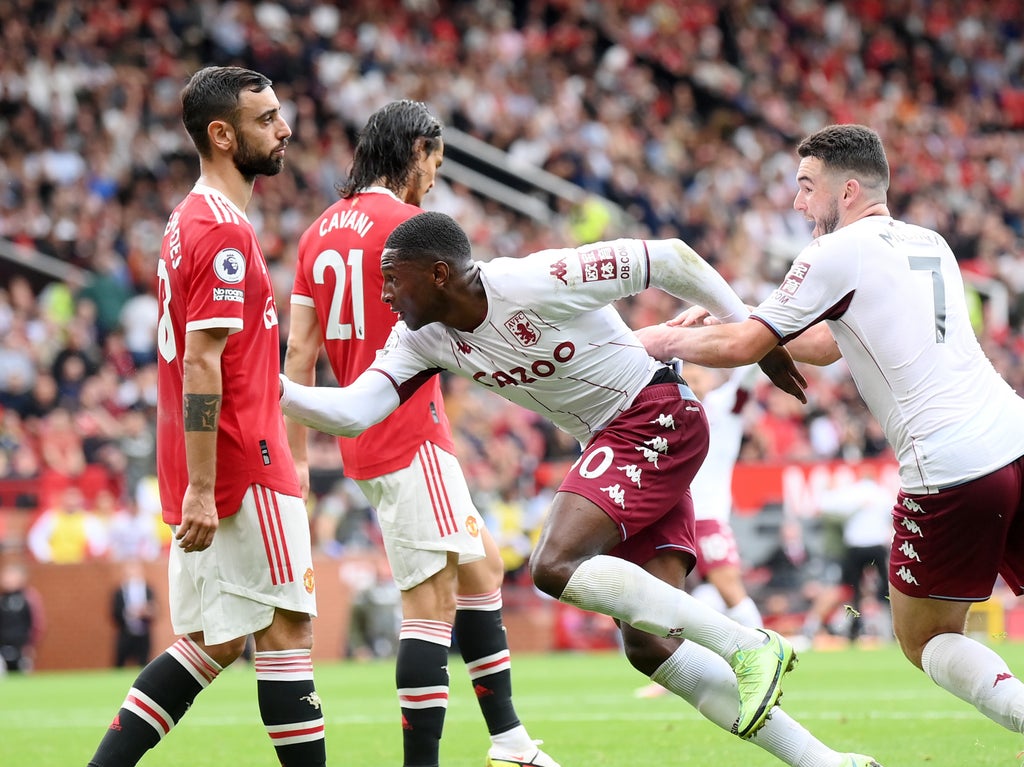 Perhaps Cristiano Ronaldo will be Manchester United’s penalty-taker now. Perhaps Ole Gunnar Solskjaer will have a different lament about spot-kicks.

The United manager had been complaining about the penalties his side were denied. United duly got one when substitute Edinson Cavani glanced on Bruno Fernandes’ cross and the ball hit Kortney Hause’s hand. Not, perhaps, the clearest of decisions, but Mike Dean gave it and United, trailing 1-0 in injury time, welcomed it.

Yet the ball was gathered not by Ronaldo but by Fernandes. Usually such a superb taker of spot-kicks, he ballooned his effort into the Stretford End.

And so United’s summer transfer business brought a victory at Old Trafford. Just not Ronaldo and not for them. With Axel Tuanzebe, borrowed from United, ineligible to face his parent club, Hause came into the Aston Villa team. Charged more with stopping Ronaldo and co, he charged forward to head in Douglas Luiz’s late corner.

In the process, Villa replaced Pep Guardiola’s Barcelona as the last team to keep a clean sheet against a Manchester United side including Ronaldo. This was a day, a performance and a result that made it feel far less likely that United will displace Guardiola’s Manchester City as champions.

There was no lack of effort, or indeed efforts, from United, who chalked up 28, but this was still an illustration of their shortcomings: in midfield, predictably, and at the back, while Solskjaer may now find himself short of stoppers, with Luke Shaw and Harry Maguire going off injured. The Villa rearguard were overworked at times, but if Ronaldo was expected to remedy one of United’s problems – an occasional capacity to slip up at home against their supposed inferiors – and if Villa were his favourite opponents in his first spell at Old Trafford, this amounted to a frustrating afternoon for him.

For the first time since his valedictory cameo for Juventus, he left the pitch without a goal. He was the least effective of United’s front four but if Ronaldo retains a capacity to overshadow everyone around him, misses have been a problem for Solskjaer’s side in successive games and with very different forward lines: first West Ham and then Villa left Old Trafford without being breached.

Mason Greenwood proved the brightest of the United attackers in open play, looking at home in exalted company alongside the Old Trafford Galacticos. He was elusive and electric, gliding past defenders, twice testing Emi Martinez. Fernandes flashed a shot over after 90 seconds and, prefacing the penalty drama, was allowed to take a free-kick before Ronaldo – he hit the ball, as did his older compatriot later – but he had free rein over set-pieces from the flanks, and they were when he almost unlocked Villa.

Martinez parried Maguire’s firm header while Paul Pogba headed wide after Raphael Varane had flicked on Fernandes’ corner. Pogba brought menace at times, threatening a breakthrough with a loping run and rising shot in the second half.

But while United had mustered 15 attempts before the break, they lost their way for 20 minutes after it, losing momentum in the process. And while Villa had fewer attacks, they arguably had more fine chances.

Well-coached, ambitious and enterprising, they could attribute their first wonderful opening to Dean Smith’s 3-5-2 formation as United were outflanked. One raiding wing-back, Matty Cash, surged to the byline to pick out the other, Matt Targett but, from four yards, he lofted a shot over the bar. Given the wayward nature of the effort, Targett scarcely felt a case of nominative determinism.

United displayed the wrong sort of creativity when Maguire’s poor pass meant a stretching David de Gea could only find Ollie Watkins with his attempted clearance. The goalkeeper recovered to block the striker’s shot, and denied the lively Watkins again in the second half, while Ezri Konsa had been left unmarked to head over from three yards.

It was a warning United did not heed when Hause was allowed to meet another McGinn corner. Then came United’s chance to equalise.

Summing up their day, they missed it.