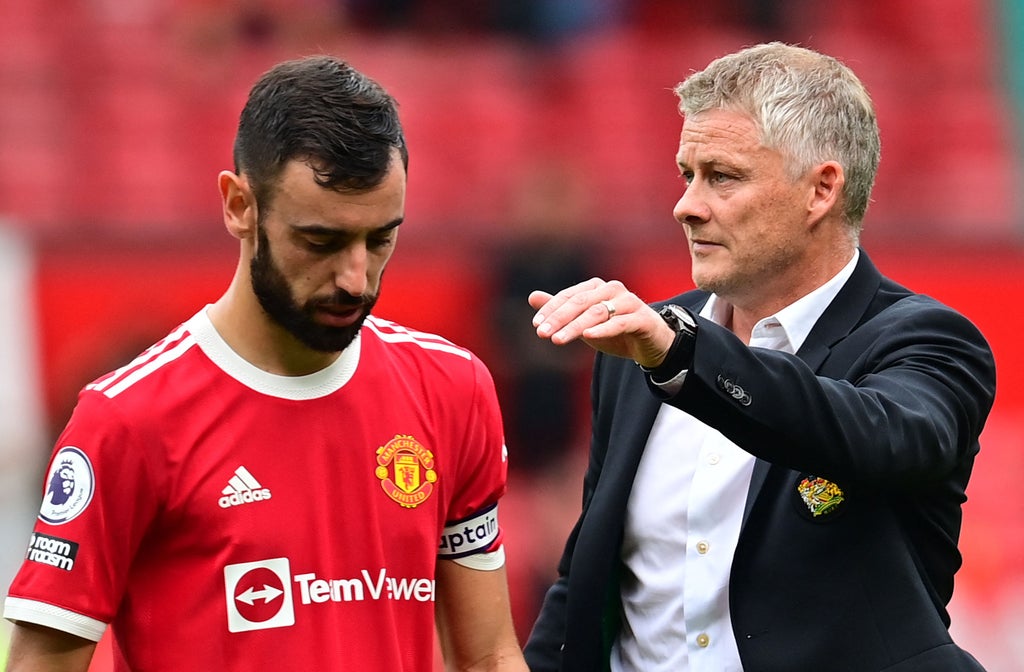 “No excuses,” said David de Gea, around the time Ole Gunnar Solskjaer was making several. Perhaps it sums up the attitudes of a rejuvenated goalkeeper and a beleaguered manager. The Norwegian’s trademark sunny disposition has been replaced by an unnecessary obsession with officials and officiating.

Solskjaer’s optimism can be endearing, his almost child-like love of United infectious. He is not a natural moaner, almost certainly not the manager who usually puts in most calls to Mike Riley. Yet gripes about the penalties United were not awarded in previous games (thanks, it was implied, to Jurgen Klopp) were replaced with a lament about Aston Villa players delaying and distracting Bruno Fernandes before he missed the one that was given and a suggestion that Kortney Hause’s winner should have been disallowed. Taken in isolation, he may have a case. Combine and repeat complaints, however, and there is a danger he seems more whinger than winner.

It appeared indicative of his state of mind. If Sir Alex Ferguson excelled at creating a siege mentality, perhaps Solskjaer just felt a little besieged. Three defeats in four games can do that, but Solskjaer has been an antidote to the paranoia and negativity of Jose Mourinho. Yet a certain Portuguese can elevate expectations and change the context. A month ago United re-signed Cristiano Ronaldo. Now they have lost their last game in each of the Premier League, the Champions League and the Carabao Cup.

The vast majority of the blame should not be laid at Ronaldo’s door: he did not even play in the League Cup, had been substituted before Jesse Lingard’s error condemned United’s 10 men to defeat in Bern and, judging by his demeanour, probably thought he should have taken the penalty that ought to have brought an equaliser against Aston Villa.

Yet bolting on a seeming short cut to success applies pressure. Solskjaer’s reign has been sustained by a feeling of progress; often genuine, sometimes illusory. Looking the fourth best team in the league, already out of a competition that could have brought his belated first trophy, now potentially shorn of three of his back four against Villarreal when a second successive Champions League group exit is threatened feels more perilous. The same again may not be good enough for Solskjaer. Ronaldo will score goals but perhaps not remedy flaws: the lack of a midfield, the set-piece failings that cost United again when Hause headed in a corner, the mixed home form. A glimpse at the manager’s CV and the forward’s roll of honour could make Solskjaer an obvious scapegoat if United underachieve.

Perhaps that is why he is playing the blame game. Perhaps this would always have been a defining season for him, determining if he is remembered as the amiable, well-intention nearly man of a manager or a transformative figure, but the sense is his tongue has got sharper as the criticism has mounted. Solskjaer is the United legend who has re-signed a United legend as other United greats have started to show more dissent.

There has been a public row with Rio Ferdinand. A couple of weeks ago, a blunt Paul Scholes said: “We know City, Liverpool and Chelsea have got proven winners as their managers, and United haven’t.” Perhaps Solskjaer’s extended honeymoon is over. Certainly Dean Smith, like David Moyes and David Wagner before him, seemed to have a more coherent game plan with lesser resources as United were beaten.

The cruel irony is that Fernandes’s presence as penalty taker seemed to stem from the right principles: from meritocracy, not pandering to a star. The younger Portuguese had a 93 percent success rate from the spot, the older one an 83 percent conversion rate. For much of Solskjaer’s reign, Fernandes has been the player for pressure situations, the banker, the guarantee, but Solskjaer’s talisman missed.

As much as anything else, Solskjaerism is about big players doing big things at big moments. Even United’s only win in four came courtesy of De Gea’s injury-time penalty save at West Ham. Now United have acquired more big players; in Ronaldo, the biggest. That accumulation of match-winners is supposed to generate results via individual inspiration.

Their games can be defined not by tactics or broader philosophies but by moments. Yet of late, more have been lowlights than highlights: a misjudged Lingard back pass, a rash Aaron Wan-Bissaka lunge, a skied Fernandes penalty, the 55 shots that have brought no goals in consecutive home defeats.

Perhaps a cluster of errors have come in swift succession and, over a season, United will not be as prone to pratfalls. For now, this could appear mismanagement or just misfortune. Yet Ferguson’s criticisms of referees, sometimes intemperate but often targeted, could be deflection tactics or ways of gaining an advantage, and worked perhaps because he was Ferguson. He bent fate to his will, rather than being trapped by it. Increasingly, that does not feel true of Solskjaer.