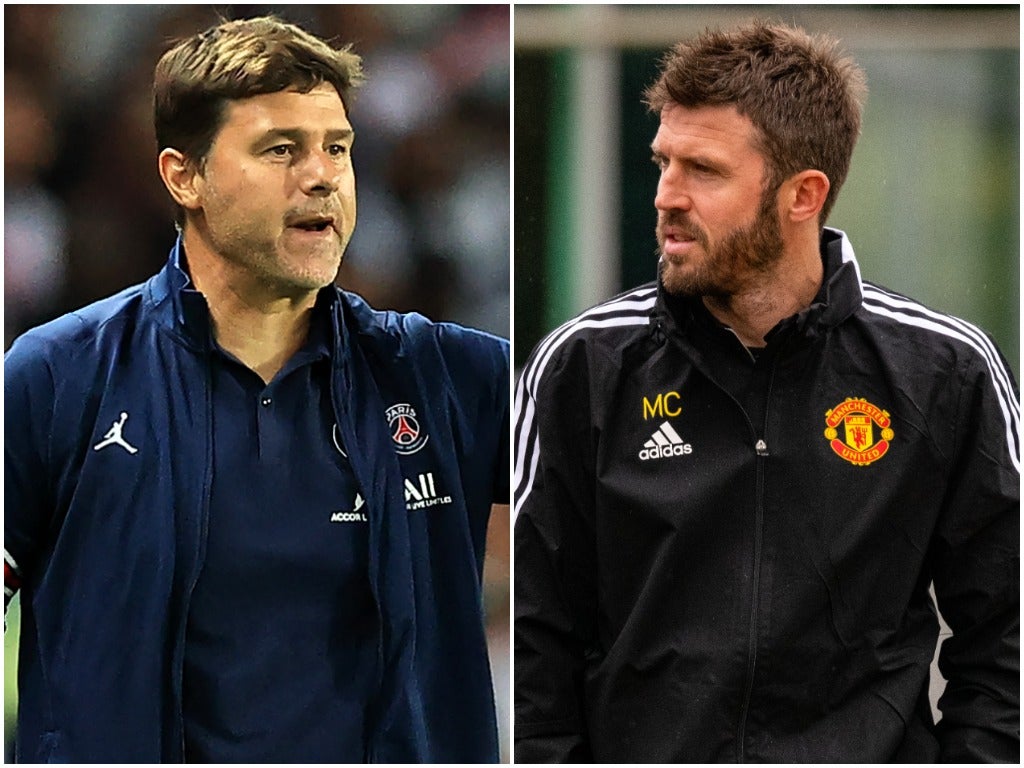 Carrick takes training as Utd prepare for Villarreal in UCL

Manchester United play their first match in the post-Ole Gunnar Solskjaer era on Tuesday night, when they face Villarreal in the Uefa Champions League. United and their Spanish opponents currently occupy the top two spots in Group F, but Atalanta are just two points back and face bottom side Young Boys this evening in what is a tight group, with United’s progression still somewhat in doubt.

Michael Carrick needs a fast response from the team, therefore, to the abysmal weekend defeat to Watford which saw Solskjaer ultimately removed from his position in the dugout. Since his exit, an interview with the club from the former boss surprised some, while the names rumoured to be on the wishlist to replace him quickly grew. Mauricio Pochettino is reported to be at the head of that queue though, with the Independent learning that the former Tottenham and Southampton boss is keen to take over at Old Trafford – and could even do so mid-season.

If it can’t happen until summer and United follow the interim boss route until then as they announced, Laurent Blanc is one of the leading candidates for the post – but it’s Carrick in charge as United play their penultimate European game of the group stage and a fast turnaround in performances and results is required if they want to remain in the top competition.

Michael Carrick might be in sole charge for now after Ole Gunnar Solskjaer’s departure, but he hasn’t stopped being in contact with his former boss – as he puts it, they remain friends and he had to speak to him to be able to move on with the job at hand.

“My first thought was speaking to Ole about it and he was fully supportive, as you’d expect, as he is, but it wasn’t something I just took for granted because, in some ways, it didn’t feel quite right – me being here and not having him around.

“But, of course, as I said before, football is a business and as a club, it’s the way it is. You’ve got to move on quickly. I spoke to Ole late last night [Sunday] anyway but in between that, I had to flip my focus and concentration into a new role and almost had to put my emotions aside the best that I could. Of course, it wasn’t easy but, at the same point, there was a job to do.

“I have a responsibility to the club, for the players, to pull everything together and prepare the team for a big game on Tuesday night. I did manage to speak to Ole again late last night, which was nice, and obviously we’re friends and that will never change. I’ll catch up with him some time soon again when we get back.”

Interesting comments from Man United captain Harry Maguire this morning, on the departure of former manager Solskjaer. He suggests that the past couple of months has been the issue, with the players needing to “take huge responsibility” for what has happened in that period.

“Yes of course, he’s been brilliant with me. He brought me to the club, made me captain, which is obviously a huge honour, a huge privilege, and I’ve had a great relationship with him over the last two or three years.

“We’ve had some great times. We’ve had ups, we’ve had downs but we’ve stuck together and we’ve moved forward. In the last two months, the progression hasn’t been there.

“We’ve stopped performing well enough individually so players obviously take huge responsibility. We feel we take the responsibility as much as the manager but it’s football and that’s what happens. Yeah, we’re so disappointed that we couldn’t do enough to change the results because the lads wanted to and have so much respect for him.”

No doubt there will be huge interest around Man United’s match tonight, even more so than usual as neutrals tune in to see whether the team offers a response to their embarrassing thrashing by Watford at the weekend.

The performance level, disorganisation and result all cost Ole Gunnar Solskjaer his job – but can his assistant, the inexperienced Michael Carrick, turn things around in just a couple of days?

All the details you need to know on United’s team news, where to watch the match online and on TV and everything else surrounding the game is right here.

Saturday’s 4-1 defeat to Watford was the end of the road for the popular Solskjaer, leaving United with only three wins in their last 11 games and conceding goals at an alarming rate.

Here, the PA news agency looks at how United’s managers since Sir Alex Ferguson’s retirement have fared in their early games.

Carrick ready to lead Man United for ‘however long it takes’

Michael Carrick isn’t going to hide away from the fact he was part of the coaching staff which saw results took a downturn, and he’s hoping to make the most of his time in the hotseat – however many games it turns out to be for.

“My thought process is picking the team for tomorrow night, giving it my best. I know the boys very well, the staff very well, the club very well,” he said before tonight’s clash.

“I’m prepared to do it for however long it takes, whether it’s one game, two games, whether it’s a little stretch longer than that, right now I’m not too sure, but that’s not something that’s on my mind. It’s about tomorrow.

“It’s a challenge, the initial reaction yesterday and coming to terms with the situation. But quite quickly you’ve got to focus, there’s a responsibility.

“I’ll just throw myself into doing everything I can, of course it’s a limited time, I’m well aware of that, it’s a challenge I’m relishing at the moment, I’m really looking forward to it.

“I’ve got great people working with me, a great group of players, they’ve proved that before and they’ll prove that again.”

An intriguing comparison here from Lawrence Ostlere, highlighting how just as one boss has signed a new deal after leading the team to higher highs than any seen in a generation, one has been disposed of after falling short.

Southgate and Solskjaer were appointed to England and Manchester United in similar circumstances, he writes, but only one fitted a broader strategy and suited the long-terms demands of the job.

A new broom sweeps clean but it is not yet clear whether that will be the case for Manchester United’s caretaker manager, if that is indeed what we’re calling him.

Well, as Ole Gunnar Solskjaer’s former assistant, Michael Carrick can’t exactly be pleased at how he is thrown into the hot seat, but this will mark his first match in sole charge of any club anywhere – and given it’s the Champions League, it’s not quite starting from the bottom, is it?

United did beat the Yellow Submarine earlier in the group stage, but it’s a tougher side to face at home than away with just one home defeat for Unai Emery’s side in LaLiga this season.

Here’s a run-down of what the former England midfielder is in line to face – as well as the rest of the Premier League teams in action this week.

Good morning and welcome to the Independent’s coverage of the latest news surrounding Manchester United’s manager search, as well as the build-up to their first match since Ole Gunnar Solskjaer was sacked.

The Red Devils face Villarreal in the Champions League and Michael Carrick, former assistant to Solskjaer, is the man leading the team out this evening. That fixture kicks off at 5:45pm GMT, but before then there will remain plenty of speculation and news over who will be the longer-term replacement for Solskjaer – and perhaps on who the interim boss until the end of the season will be, too.

United took the unusual step of announcing that Carrick would take over on a short-term basis before an interim manager was appointed through to the end of 2021/22, at which point a new permanent boss would be announced as part of what may be something of an overhaul at the club across the summer.

We’ll bring you news and build-up across the day of all the goings-on at the Old Trafford club.