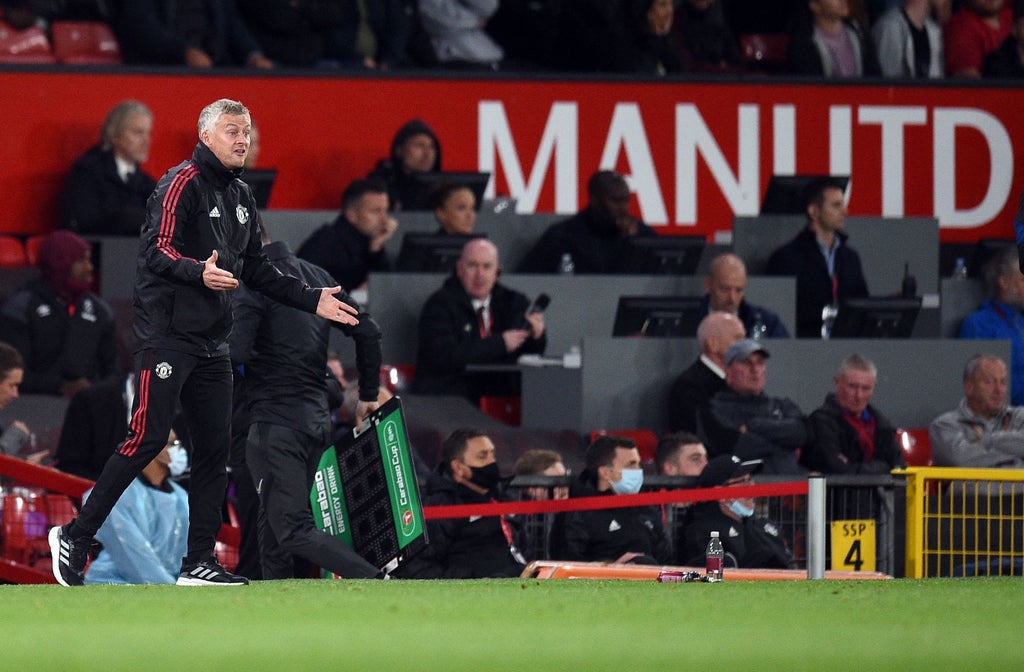 Ole Gunnar Solskjaer said he did not regret making 11 changes to his side as Manchester United were knocked out of the Carabao Cup by West Ham.

The United manager changed his entire starting line-up from Sunday’s 2-1 victory over West Ham at the London Stadium – a result the visitors avenged four days later with their first win at Old Trafford since 2007.

United had reached the semi-finals of the competition in each of the last two seasons and will have had ambitions of going one step further – but their wait for a first trophy under the Norwegian goes on.

The hosts struggled for fluency in attack until the introduction of 19-year-old Mason Greenwood on the hour and Bruno Fernandes with 15 minutes to play, but United’s late pressure was “too little, too late” according to Solskjaer, who insisted that his changes were necessary given his side’s schedule of fixtures.

Asked whether he regretted the decision, Solskjaer told Sky Sports: “You want to go through but it’s a long season. We’ve got big games coming up and that’s the decision we made.

“We’re at the start of the season. We know it’s going to be a long journey; Champions League, FA Cup, Premier League, we’re got loads of games. We are just going to keep doing what we’re doing, trying to get results.

“We’ve started the season OK, apart from being out of this cup which is not great. We’ve not had a great result away in Europe [a 2-1 defeat to Young Boys] but we’ll refocus and go again on Saturday.”

Manuel Lanzini scored the decisive goal in the 10th minute as West Ham capitalised on a fast start at Old Trafford with a deserved breakthrough.

Unlike on Sunday and on many other previous occasions in the Premier League, United were unable to come from behind and Solskjaer was left to again bemoan his side’s slow start.

“Poor start, slow start, again. That needs addressing,” Solskjaer said. “I think we’ve addressed that a few times in the league as well. We started slowly and they got the goal but after that we played well for long periods.

“Stats don’t mean anything but when you’ve had 27 shots you know the boys have given it a good go.

“We didn’t create big chances but we built pressure. Mason came on and had a decent [chance] but sometimes that pressure doesn’t come to anything. It was too little too late and you have to go for it at the end – they could have scored a couple.”

Solskjaer added that he thought his side should have been awarded a penalty after Jesse Lingard went down in the box under a challenge from West Ham captain Mark Noble. United were also denied a penalty on Sunday after Cristiano Ronaldo saw two appeals waved away.

“I’d rather not say too much but it’s a penalty again on Jesse,” the United manager said. “He can’t pull his shorts and shirt on the way down. Mark was unlucky on Sunday [with his penalty miss] and probably lucky on that one today.”