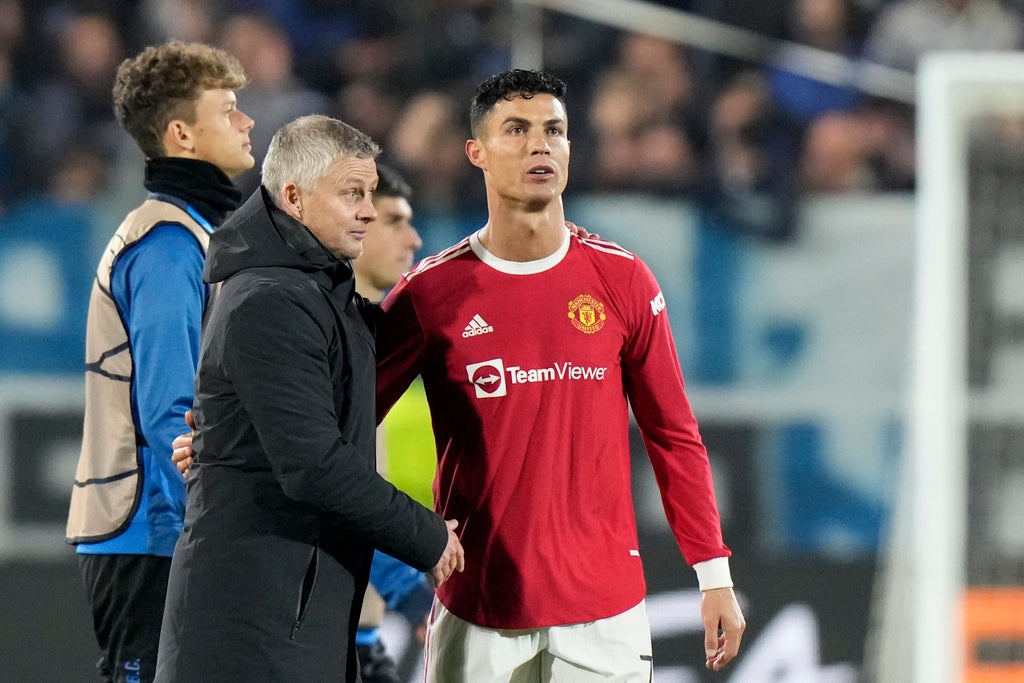 Having responded to the humiliating home loss to Liverpool by scoring three without reply at Tottenham, the Red Devils put in an error-strewn display away to Atalanta

Josip Ilicic’s strike squirmed under David De Gea and Duvan Zapata put Atalanta back ahead after Ronaldo had netted at the end of a superb team move involving a superb Bruno Fernandes backheel.

United were staring down the barrel of a sixth loss in 11 matches heading into stoppage time, only for their recently returned star to strike and seal a 2-2 draw.

Ronaldo has already wrapped up Champions League comeback wins against Villarreal and Atalanta, leading Solskjaer to compare his impact to that of basketball great Jordan with the Chicago Bulls

“We all have our roles and responsibilities,” the United boss said. “Of course Cristiano is a leader in the group but that’s what he does: he scores goals.

“We’re not happy conceding two goals. Both of them are very, very fine margins.

“I think the first one should be offside, the second he’s a centimetre onside, maybe offside last season. It’s fine margins.

“But he does provide those moments and I’m sure the Chicago Bulls didn’t mind having Michael Jordan either.

“For me, Cristiano is getting better and better for us. He’s feeling better.

“You know he’s not had a proper pre-season, now he is getting better and better and he’s feeling up to speed now.”

Ronaldo’s late leveller keeps United at the top of Group F ahead of the trip to Europa League final foes Villarreal later this month.

“I’ve said if you win your home games and you get a result or two away from home you go through and the attitude to never give in was there. You cannot question the attitude.

“Of course first half I thought we were a bit too sloppy, gifted them a few too many transitions and turnovers.

“But the goal was excellent, the first one, and we did create some openings, could have scored more.”

Solskjaer praised Eric Bailly on his return to the starting line-up in place of injured Victor Lindelof as United went with a three-man backline that also helped them shut out Spurs.

But the Red Devils moved to a back four in the first half after Raphael Varane went off with a hamstring issue that threatens his availability to face Manchester City in Saturday’s derby clash.

“He didn’t want to risk anything so first assessment doesn’t look good but we’ll assess him again tomorrow and fingers crossed.”

While United remain in control of Group F, it was another case of what could have been for Atalanta who blew a two-goal lead at Old Trafford a fortnight ago and lost 3-2.

Asked about how frustrated he was, head coach Gian Piero Gasperini said: “On a scale of one to 100? A thousand! We believed we could do it.

“It looked like they were all out of puff and we came up against an incredible player tonight.”