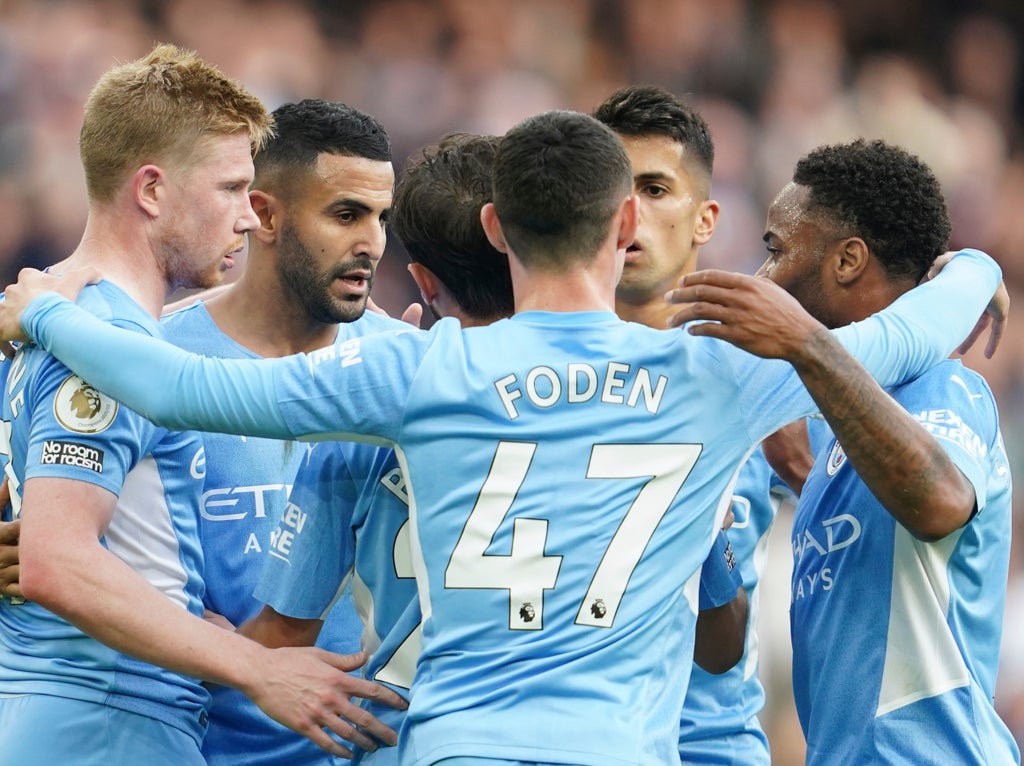 While a title challenge falls to pieces on one side of Manchester, a title defence ticks along nicely on the other. Some of the biggest cheers of the day around the Etihad were saved for the electronic hoardings providing goal updates from the King Power Stadium, which said everything about this comfortable, accomplished and reassuringly low-key Manchester City victory.

Burnley had their moments, missing a pair of clear-cut chances, but Bernardo Silva and Kevin De Bruyne’s goals sent the defending Premier League champions on their way to collecting all three points. After four consecutive 5-0 defeats at the Etihad in the league and cup, this was a more respectable result for Sean Dyche’s visitors, yet they remain winless and in the relegation zone.

After telling Raheem Sterling that he must prove he deserves more minutes by performing when out on the pitch, Pep Guardiola handed him only his second Premier League start of the season to date, initially deploying him through the middle in the much-discussed false nine role. City were more impressive out wide, though, and through Joao Cancelo and Bernardo’s menacing combination down the right.

One early delightful passage of interplay between the pair was followed a minute later by the opening goal. Cancelo first set up Bernardo to cut inside and into the penalty area, then play a pass to the edge of the box. Phil Foden’s low drive was only parried by Nick Pope and dropped invitingly for Bernardo to convert from close-range. Cancelo then hit a similar chance into Pope’s midriff shortly after. A quarter of an hour in, a fifth straight 5-0 appeared possible.

The remainder did not follow the usual script, however, even if City still went in ahead at the break. A certain sloppiness crept into Guardiola’s side and should have been punished, particularly when Maxwell Cornet was put clean through on goal by an exquisite Dwight McNeill pass. Only Lionel Messi has scored more goals than Cornet’s four against Guardiola in European competition, yet his shot was straight at goalkeeper Zack Steffen, standing in for Ederson following the usual No1’s late arrival back from international duty with Brazil.

It was a warning sign, one that City did not immediately heed. Though Burnley would not have a better chance of equalising than Cornet’s miss, they continued to grow into the game. Aymeric Laporte had a difficult afternoon and was perhaps lucky not to be shown a red card moments before the break for a late lunge on McNeil. Fortunately, for both Laporte and the Burnley player, he pulled out of a dangerous challenge at the last possible moment and was only cautioned.

City were happy to see half-time, not because they were under any major threat of surrendering their lead, but there were creases that needed to be ironed out. With Sterling switched out to his favoured left-wing role, City improved and Riyad Mahrez saw a blistering shot tipped against the crossbar at the start of the second half. Ashley Barnes went close at the other end, though the result would soon be put beyond doubt.

With 20 minutes remaining, Mahrez was afforded time and space to carry the ball through Burnley’s half, and De Bruyne saw his initial shot blocked by Eric Pieters. As Mahrez and Ashley Westwood tangled for the rebound, the loose ball broke back to De Bruyne, who made no mistake with his second attempt and finished emphatically. Guardiola could finally turn to his bench and begin to rest legs, with De Bruyne, Laporte and man of the match Bernardo all replaced before the final whistle.

There was still time for another late Burnley chance, and Guardiola may be concerned that Chris Wood was allowed a gilt-edged opportunity at close range after Nathan Collins’ flick-on from a wide free-kick, but the New Zealander scuffed over. On another day, City may might been made to pay for such moments of complacency. Yet even then, you feel they will still show enough quality to win regardless, while leaving enough in the tank for the long defence of their crown that lies ahead.