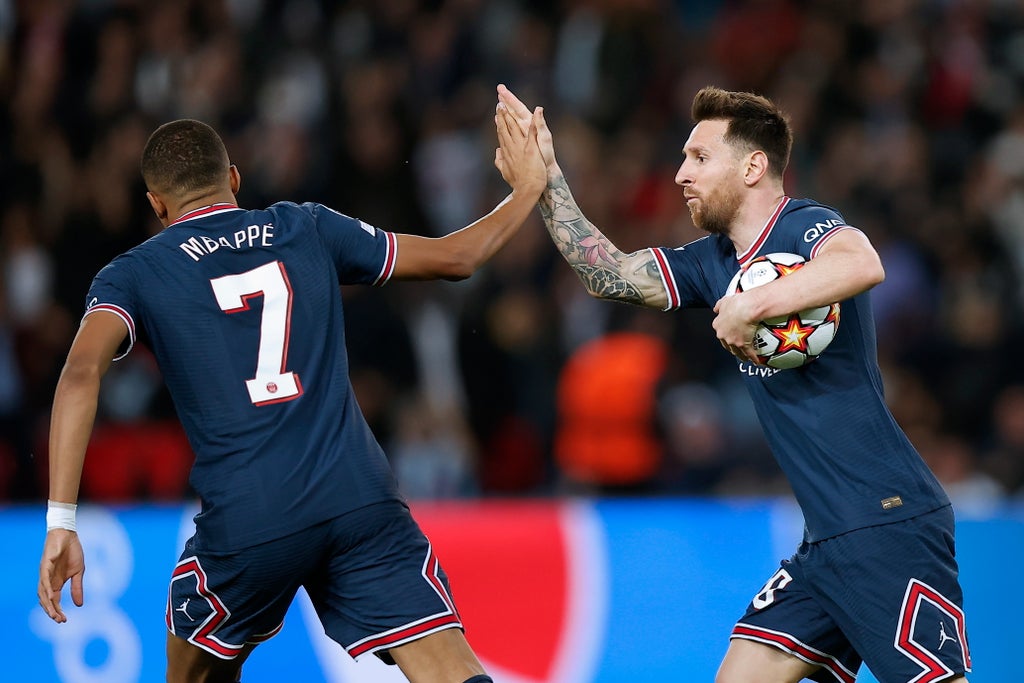 Ronaldinho smiled and raised his fists towards the night sky. Mauricio Pochettino lent back in the technical area, clearly overwhelmed and definitely relieved.

Lionel Messi put the ball on the spot and delicately painted it with a Panenka. The coolness, calmness and panache of it hid the fact that this was no showcase by Paris-Saint Germain.

Mohamed Simakan had pushed the French international leading to the penalty. Mbappe could have taken the kick, but gestured for Messi to do the honours.

It was wise thinking given the execution and considering his own wild strike from the spot at the death when the match was already won.

Mbappe had done enough by the time he sent the ball into the stands. He scored the opener when PSG were being outplayed and unselfishly set up Messi with a fine pass on 67 minutes before winning the penalty.

The pair had sharply turned an embarrassment into triumph, but victory cannot conceal the whole truth here.

PSG have been constructed to win the European Cup, to spark a spell of continental dominance having monopolised Ligue 1 but for rare occasions.

The painful reality is, having added the best player of a generation and probably of all time, they haven’t even looked convincing enough to win group games.

The victory against Manchester City, sealed courtesy of Messi momentarily remembering he is not a mere mortal on the pitch, blurred out big problems for PSG. Rinse and repeat now.

Their lack of balance between attack, defence, ingenuity and discipline discounts them from being able to control matches on this stage.

Club Brugge held them to a 1-1 draw, City had been the superior side despite defeat and Leipzig continued the trend of highlighting their flaws before being blitzed by Messi and Mbappe.

Here, Jesse Marsch had set his side out to emphasis those of PSG. They started rapidly, shifting the ball smartly both on the counter and when having pockets of possession. Keylor Navas saved from Konrad Laimer early and Andre Silva headed wide before drawing a full-stretch intervention from the goalkeeper.

The ball rebounded to Laimer on the right, but his blast was blocked by Navas again. The stopper, in for Gianluigi Donnarumma, was the only reason PSG didn’t endure a disastrous opening spell.

And then, at the other end of the pitch, Mbappe offered a window into world class. From a Leipzig attack, Silva was dispossessed on the edge on the area and PSG tore forward with Julian Draxler feeding the No 7.

Mbappe shaped as though he was going to bend his hit towards the far corner, but smashed it near post. It was a beautiful, disguised shot that offered relief to PSG.

Leipzig did not cower though and continued to largely outplay the hosts. Their reward materialised just before the half-hour mark when the excellent Angelino supplied Silva’s clever movement with a low ball across goal to smash home.

Marsch’s men began the second half with more purpose too, with Silva and Nkunku wasteful before Angelino weaved his magic again.

The 24-year-old delivered a fine cross that no PSG seemed interested in attacking so Nordi Mukiele took full advantage to put Leipzig ahead.

Pochettino’s side were on the ropes at times, where Navas shielded their glass jaw.

That won’t long be remembered though, amid the finesse and formidable combo of Mbappe and Messi.

The former missed a penalty with 94 on the clock, but it mattered not.

Leipzig gave all they could, but PSG had two of the world’s best players to compensate for what they couldn’t give.