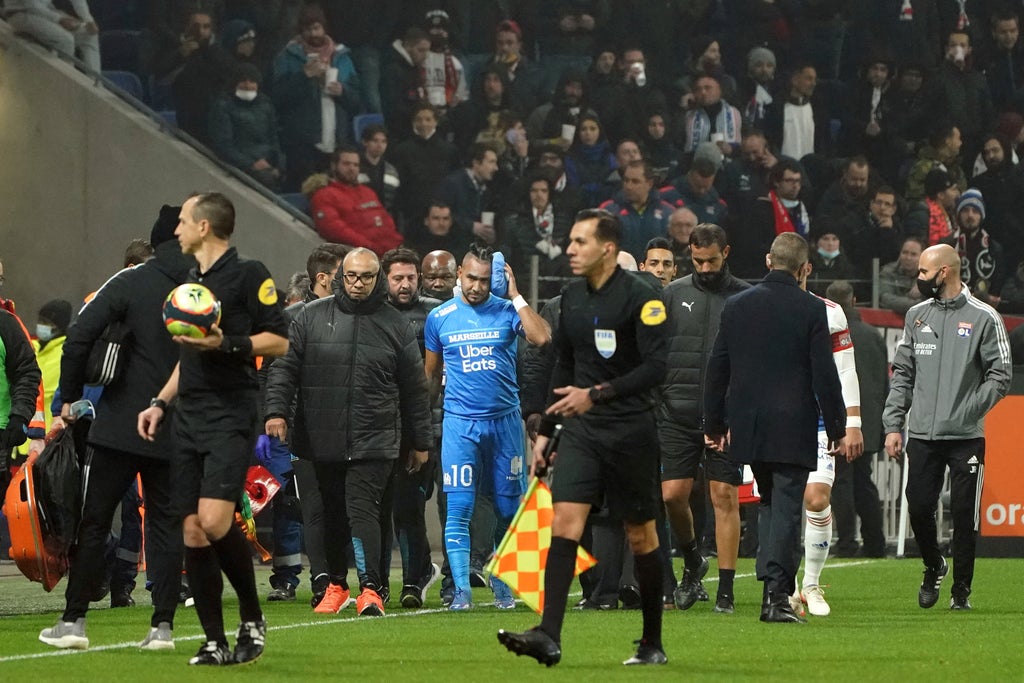 Lyon president Jean-Michel Aulas has apologised to Marseille’s Dimitri Payet after the forward was hit by a bottle thrown from the stands which resulted in their match being abandoned.

Fan disorder has blighted Ligue 1 in recent months and Marseille supporters were banned from attending after sanctions against the club for a previous pitch invasion and clash with Angers fans in September.

The game at Groupama Stadium was just four minutes old when Payet was struck on the head by a water bottle as he attempted to take a corner.

“We send him our apologies. The perpetrator was immediately reported and caught. It’s an isolated act,” Aulas said in quotes posted on Lyon’s Twitter account.

The players had been off the pitch for more than an hour when it was announced the match would resume, with spectators warned any further incident would lead to it being halted for good.

While the Lyon players returned to the field to warm up, Marseille did not emerge from the dressing room and the match was eventually postponed.

“The referee summoned everyone a second time to announce that he had changed his mind,” added Aulas.

“When there are 55,000 people in a stadium, precautions must be taken.”

Real Madrid moved one point clear at the top of LaLiga after a 4-1 win at 10-man Granada.

Marco Asensio and Nacho put the visitors 2-0 up inside 25 minutes and, although Luis Suarez pulled one back before half-time, Vinicius Junior restored Madrid’s two-goal advantage.

Ten-man Real Sociedad missed the chance to overtake Real after they were held to a goalless draw at home to Valencia, with Aritz Elustondo sent off.

Getafe’s second win in three games – 4-0 over Cadiz – lifted them off the bottom, while Real Betis’ 3-0 victory against Elche moved them above Barcelona into fifth.

Serie A leaders Napoli’s unbeaten start to the season was ended by a 3-2 defeat at Inter Milan.

Goals from Hakan Calhanoglu, Ivan Perisic and Lautaro Martinez turned things around after Piotr Zielinski had put the visitors ahead and although Dries Mertens’ 78th-minute goal set up a frantic finish, Inter moved to within four points of the top.

Jose Mourinho’s Roma moved up to fifth after a 2-0 win at Genoa courtesy of 18-year-old substitute Felix Afena-Gyan’s first senior goals late on.

Freiburg’s hopes of closing the gap to second-placed Borussia Dortmund in the Bundesliga were dashed after they lost 2-0 at home to Eintracht Frankfurt courtesy of first-half goals from Jesper Lindstrom and Filip Kostic.