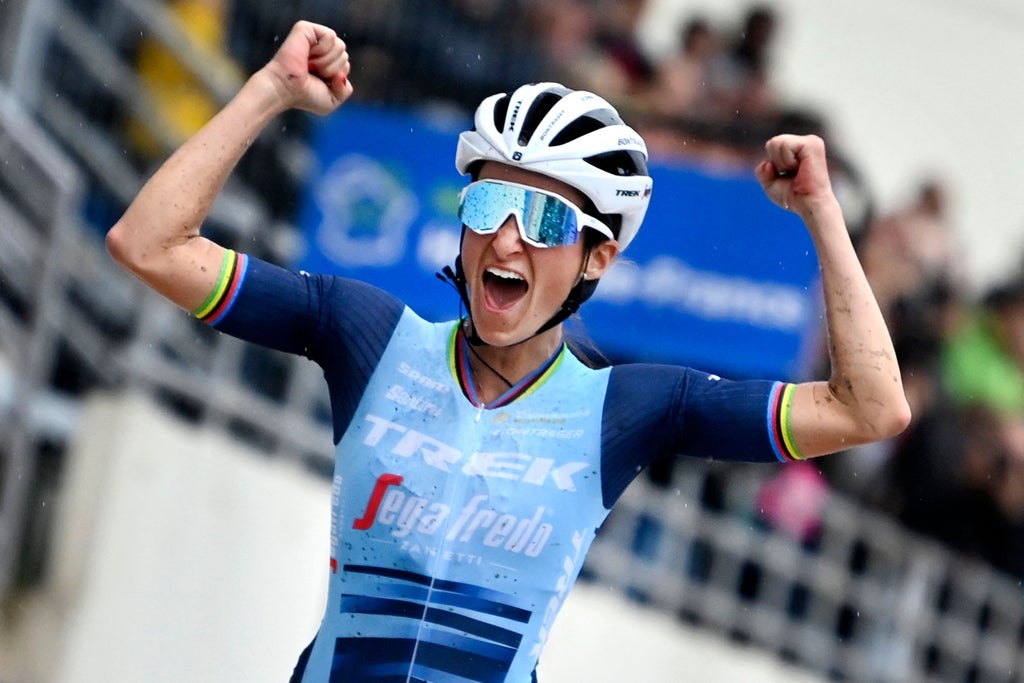 As an emotional Lizzie Deignan clutched the Paris-Roubaix trophy – if you can call a giant slab of granite a trophy – the blood across her shredded hands was clearly visible, matching the red paint on her fingernails. Long after the race was won her handlebars were still covered in crimson stains bearing the toll of a race like no other.

The “Hell of the North” is a brutal thing at the best of times but the first women’s edition in history was something else. The pandemic had forced a switch from Easter to autumn, and the rains greased the famous cobblestones and churned the mud in preparation for carnage. It was less a race and more a battle for survival, The Hunger Games set in French countryside, with frequent crashes and often gruesome injuries. Annemiek van Vleuten’s season was ended after she broke her shoulder and her pelvis in two places, though not before she got back on her bike and tried to ride on.

Deignan’s response to the mayhem was to deliver one of the great solo attacks, 82km of attrition which will be remembered long after her career is over. Her break clear was, she admitted afterwards, a happy accident as she injected some speed to move away from the chaos and found herself out in front. While Marianne Vos, perhaps the greatest woman ever to ride a bike, set off hunting down the lone leader, Deignan felt the pain in her blistered hands, in her aching legs, in her burning lungs, and clung on for dear life.

“I knew she had fresher legs than I did, and Marianne is an incredible athlete so I knew she’d be chasing me down and taking time out of me,” Deignan said. “My objective was just to get over the cobbles with as much time as I could because I knew that that’s where I’d be losing time because my legs were so tired. I knew that on the tarmac it would kind of be even, so my objective was just to get through those cobbled sectors ahead of her.

“There was a moment when I slid to the left and then the right and I thought ‘woooah’. But I knew that it would be worse in a group and I knew that I had an advantage to be alone and pick my lines. It was incredibly muddy in some sections, and you know I’m not a cyclo-crosser, so I took a couple of tips from my teammate Lucinda Brand. She said, ‘whatever you do, just keep pedalling’. So that’s all I could think – just keep pedalling.”

This was more than just a brilliant bike race but a slice of sporting history. On the weekend of the 118th edition of the men’s race, women were finally let loose in the Paris-Roubaix. Cycling has rarely been at the forefront of gender equality, a sport where old-school sexism is allowed to fester, but this was another landmark for the fast-developing women’s tour.

“We didn’t have a chance to dream for so long, it’s always been a men’s race,” Deignan said. “I am just so proud that this is where we are, that women’s cycling is on the world stage now. I am proud that my daughter can look at the trophy. She doesn’t just have to watch men on the TV any more. It’s proving there is appetite for women’s cycling. The athletes here can do one of the hardest races in the world and I’m so proud I can say I’m the first ever winner.”

Deignan had no time to lick her wounds – on Monday she was back on her bike for the start of the Women’s Tour of Britain, a week-long jaunt around central and eastern England beginning in Bicester, Oxfordshire and finishing in Felixstowe, Suffolk on Saturday. She has won it twice before and is going for her hat-trick, though she faces a strong list of competitors, among them Italy’s newly crowned world road race champion Elisa Balsamo.

It is another instalment in what is something of a boom for women’s cycling right now. This was a weekend when it delivered thrills and spills perhaps even more compelling than the similarly chaotic men’s race which followed on Sunday, won by Italy’s Sonny Colbrelli. There is still some way to close the gap – Deignan’s prize money was only €1,535 (£1,313), compared to Colbrelli’s €30,000 (£25,600), before her team Trek-Segafredo and sponsors bumped up the reward to match – but this was progress, displayed to the world in spectacular style.

“T​​he first step is that we have a Paris-Roubaix,” she said. “That’s a huge first step forward and I’m very grateful that I get to be a part of history. There’s no going back.” Indeed, Deignan is right at the front, leading the way through blood, mud and tears.