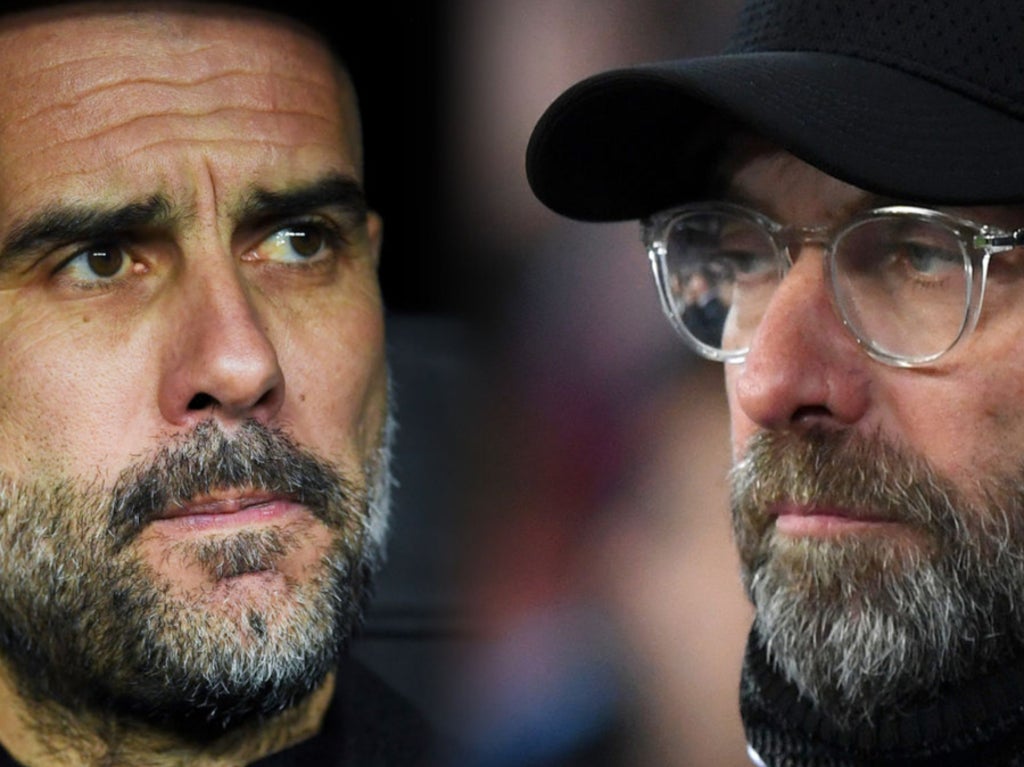 In the days before Cristiano Ronaldo signed for Manchester United, Pep Guardiola managed to persuade the striker of how successfully he could fit into Manchester City’s system. Many close to the situation insist a deal was agreed by the Thursday evening before the United old boys kicked into gear.

Guardiola’s plans for Ronaldo naturally followed on from what he had in store for Harry Kane. It’s fair to say that a lot of City’s pre-season preparation was predicated on having a proven striker. Everything that’s happening now is an adjustment to that.

It also means the champions are adjusting to every game. There hasn’t yet been a pattern to City’s matches. They have swung between sweeping attacking displays where they score a hatful of goals, more minimalist wins that have come through narrow margins, and then matches where they just look short of edge. The last three have followed this exactly. There was a 6-1 win over Wycombe Wanderers, a 1-0 victory over Chelsea and a frustrating 2-0 defeat to Paris Saint-Germain.

What follows against Liverpool will maybe tell more than any about how this season may pan out. That is all the more pronounced because this is a meeting between the two dominant attacking approaches of the last decade: Jurgen Klopp’s jagged edges against Guardiola’s smooth lines.

The evolution of the game has naturally brought the two closer together, so the differences aren’t as sharp. Liverpool now keep much more possession than Klopp’s teams used to and Guardiola has intentionally incorporated direct attacks and counters from Germany.

The events of the summer have nevertheless seemed to force more of a gap again. Virgil van Dijk’s return has restored Klopp’s ideal. The absence of a true number-nine has made this a more possession-based City again. There is some debate within the game over whether this is what Guardiola actually prefers.

The line has long been repeated about how he has always idealised a team of attacking midfielders. It is even arguable that City’s system best suits a false nine rather than a true nine. This was the source of so much tension with Sergio Aguero, after all. Guardiola wanted him to become something more than he was, more than just a finisher.

With a false nine, City are able to create more triangles. They’re less predictable. They have attackers coming in from everywhere. The current issue is they don’t have a truly top-class false nine. It has really been a series of number-eights, or Gabriel Jesus, filling in.

It will work in the vast majority of matches, of course. City simply have too much quality for it to not. It already feels, however, that a deciding factor of the season may be whether they suffer a few too many blanks like the recent Southampton 0-0. The irony of that was that it was at home, given that City have so far scored only two goals from five games away from the Etihad this season.

This was an issue in Guardiola’s final season with Barcelona, too. It was, well, all or nothing. Once they went ahead in a match, Barcelona would cut loose. If the wait for a goal went on, though, they were often left frustrated.

There is a strange psychology to that sort of football. It can be so slow-building that there is an accompanying sense in certain games they can be frustrated. Obviously a Lionel Messi, a Ronaldo or a Kane can easily solve this, or indeed the jagged edges of Liverpool.

That may lead to relatively facile debate over which attacking approach is superior. The numbers say that Guardiola’s has been resoundingly better.

In the four years since 2017, when both had put in the key pieces of their attack, City have scored 398 league goals to Liverpool’s 351. They have also scored in all but nine of their 159 Premier League games. Liverpool have failed to score in 20 of them – with eight coming in last season’s immensely frustrating campaign.

The numbers don’t tell the full story, though. The reality is that City have had far greater strength in depth, from far greater resources. Guardiola has had an array of almost interchangeable attackers ready to come in, meaning players as accomplished as Aguero or Raheem Sterling can be readily dropped for the biggest games. Klopp until last season had a very fixed front three. Only the signing of Diogo Jota broke that last season, and that’s before you get to the effect on the attack if players like Van Dijk or Jordan Henderson or out.

We’re similarly well past the stage when Klopp’s approach seemed especially suited to hurting Guardiola’s. Too much has changed since those early days. Both have adapted. Along the same lines, though, City’s 4-1 win at Anfield last season doesn’t feel very relevant to this trip given how distorted the 2020-21 campaign was. This is back to normal, but with some after-effects.

One of the fascinating elements of this season is that, despite a willingness to spend up to £150m on a striker in the summer, Guardiola has been inadvertently forced into a compromise. He has to adapt, and that applies to every game.

How he attempts to try and drag Van Dijk out of position will be instructive. There is a strong argument, after all, that Guardiola couldn’t have played the hugely effective system he did against Chelsea if Kane or Ronaldo were in the team rather than Jesus. Whether it will be in any way decisive is another issue.

One of the curiosities of this campaign is that it has scheduled a series of early meetings between the three sides who are probably best placed to win the title – in other words, all the last three clubs to win the league.

By the end of this seventh game-day on Sunday, all of Chelsea, City and Liverpool will have played each other once in what represents a little mini-league near the top. United will of course hope to intrude on that, but they now have to go some way to show they are title quality.

For the moment, games like Sunday will naturally influence the title race but they won’t decide it. It is a bit like that with the debate over whether City should have signed a striker. Guardiola gets frustrated when it is brought up. He should get used to it, though, because it’s inevitable when the summer is dominated by your attempts to sign the most high-profile strikers.

It will go on because it won’t be decided until the trophies are handed out. All they can do for the moment is pose more questions, and adapt to the answers.