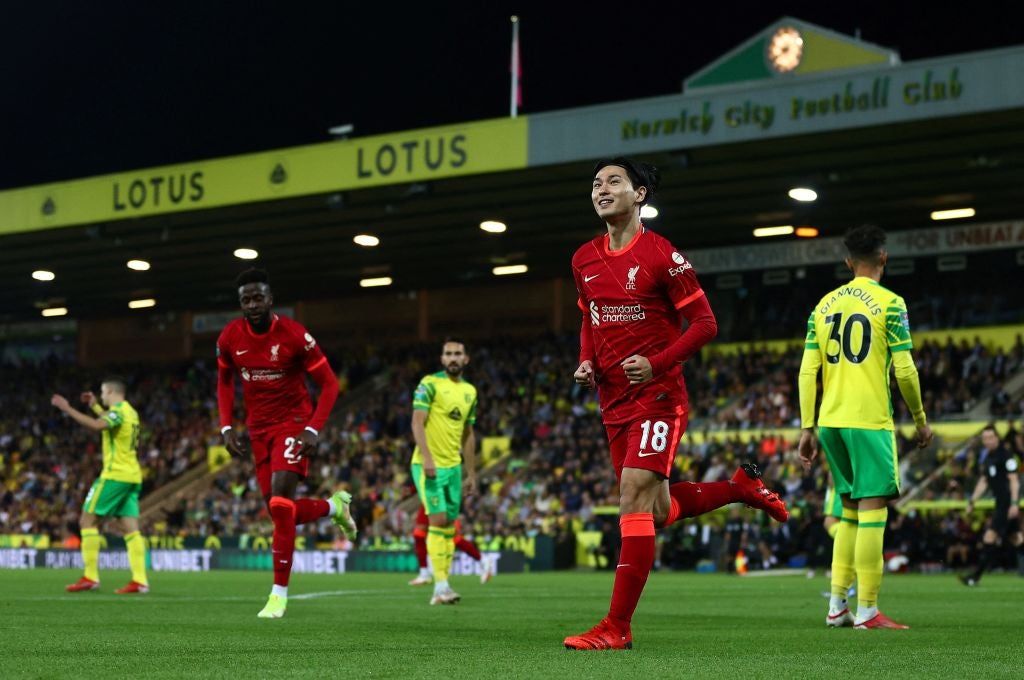 Therein lies the modern-day truths of both the League Cup and of the difference in squad depth at either end of the Premier League table.

Jurgen Klopp’s mix of incredibly talented youngsters, senior internationals and players pushing for a first-team berth were, simply, a lot better than their Norwich counterparts.

That’s largely the story of the night at Carrow Road, where the hosts had their moments which could have made the night play out differently, but ultimately spurned them. Liverpool didn’t, and progress to the fourth round.

If the Reds’ rotations had fitness, involvement and opportunity in mind, Daniel Farke’s changes might have been made with a little bit more intention to crack the metaphorical whip: five straight Premier League defeats, just one goal and a disenchanted home support come the end of the weekend defeat to Watford.

Personnel and tactics alike were switched up, but if a change of shape was the biggest hope for defensive improvements Farke had, he was swiftly reminded that organisation and understanding are as important as individuals at the back, as the Reds’ first set-piece of the night ended up in the back of the net.

Divock Origi got enough on a corner to divert the ball toward Takumi Minamino, who was unmarked all of four yards from goal, and he swivelled to drill the ball through Angus Gunn’s legs.

The Reds were well on top, controlled and dominant for most of the half: Ibrahima Konate headed over, 16-year-old debutant forward Kaide Gordon drilled one into the side-netting and Origi saw an effort blocked. Norwich, though, retained their counter-attacking threat, particularly once their wing-backs started to find positions higher upfield.

One such surge from Dimitris Giannoulis resulted in the Canaries’ best chance of the half to equalise; a save from Caoimhin Kelleher fell to the left wing-back and he positioned himself well to entice an unwise challenge from teenage debutant full-back Conor Bradley. A penalty was immediately signalled, but the home team’s other, newer, Greek Christos Tzolis saw his effort – struck along the ground down the middle of the goal – saved by Kelleher’s outstretched boot. Captain for the night Joe Gomez blocked the rebound, and Curtis Jones, making his 50th appearance for Liverpool, went straight down the other end to almost doubly punish Norwich’s profligacy.

Pierre Lees-Melou blazed over right from the restart in one more golden chance for the home side to get back on terms and there were to be no further invitations from Liverpool.

Kostas Tsimikas, who terrorised the same opponents on the same ground on the opening weekend of the season, sent over a simple clipped cross after an overlapping run, leaving Origi to nod home to double the Reds’ lead just minutes later.

Chances came and went thereafter at either end, but that was effectively that until Minamino bundled in his second, the Reds’ third, after more hesitant and shambolic defending 10 minutes from time.

Liverpool can keep rotating. Norwich can concentrate on the league.