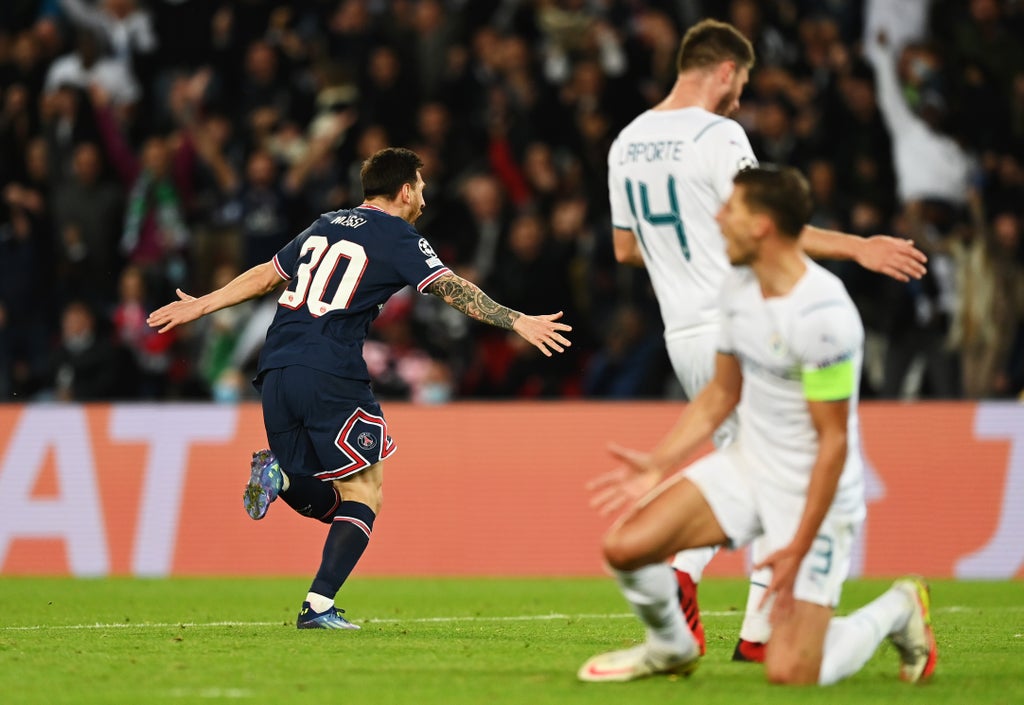 A first, from a player with no equals.

Paris Saint-Germain had the moment they’d been waiting for, and one that Lionel Messi had been saving himself for.

For 73 minutes of this group game against Manchester City, the Argentine had been doing his usual of playing in a staccato manner, conserving his energy. It is all of course so he can convert it into something wholly unusual, such as this astounding first goal for Paris Saint-Germain. Picking up the ball just inside the City half, Messi suddenly accelerated forward and left two defenders in his slipstream. The ball was played to Kylian Mbappe for the forward to immediately flick it back, and set up Messi to curl a soaring effort right into the top corner. It was a moment of pure footballing beauty that made you momentarily forget some of the less pure elements of this contest. That is obviously kind of the point. It’s the best football that state money can buy.

It also puts PSG on top of the group after a 2-0 win, and suddenly leaves City with a little more to do in this group, given Club Brugge continue to impress.

Whether it is the best football on the continent is the biggest question of all, though.

Messi’s goal was really another piece of individual brilliance that settled a game of contrasts, despite their common ground as state projects.

Both of these clubs could do with a little of what the other has.

PSG have so much individual quality but are lacking in coherence. City have so much coherence but are suddenly looking like the lack absolute top quality, at least in contrast to this PSG attack.

Kevin De Bruyne did not look fully fit. Raheem Sterling did not look clinical. Jack Grealish did not yet look like he had adapted to the level.

That will of course bring up the recurring debate over whether City should have just signed a striker. Pep Guardiola is right that results will dictate the good or bad of the decision, but we won’t know either for certain until the end of the season.

Here, it did look like it may cost them against sides that have this kind of quality.

How they could have done with someone who does what Messi does to at least increase the pressure on a fairly erratic PSG defensive structure.

The opening goal reflected so many elements of the home side’s performance. For one, it was Mbappe and Messi linking up with each other most, rather than with Neymar. The Argentine played Mbappe in for the young forward to exchange passes with Achraf Hakimi. It was so clean, and of such class. It still wasn’t completely fitting together, though, as Neymar failed to make a proper connection with Mbappe’s ball despite the goal gaping.

Idriss Gueye was nevertheless on hand to absolutely smash the ball into the roof of the net.

There was a neat bit of symbolism there, as Gueye makes such a difference for PSG, filling so many gaps.

The smoothness up front contrasts with haphazardness at the back, as so much of their defending seems to involve desperate stretches or last-ditch interventions. Gueye at least makes it look so much easier. That was particularly the case for one recovery when he just raced back to overtake Riyad Mahrez and take the ball off him.

He is one of the players who might just make this project actually work. It is still impossible not to notice the long stretches where the three stars are basically standing or strolling, as the rest of their team sprints around. It’s just the electricity when one of them gets on the ball that no doubt makes everyone feel this is well worth it. There were more than a few moments like that, as well as instances when PSG really indulged themselves. Neymar tried flicking the ball over Mahrez’s head by lifting it up between both ankles. Mbappe attempted an elaborate back heel to put him through.

You get none of that with Messi. He remains so minimalist, only taking the touches he needs to take.

That comes from literal common ground with Guardiola of course, and the systemic construction of City’s play was another contrast with PSG’s individual creativity.

There were extended passages when City were moving the ball around to move the home defence out of position, but not that many real moments of danger. Bernardo Silva somehow missed the target but was at least offside, Ruben Dias forced Gianluigi Donnarumma into a good save from a corner.

Sterling was meanwhile having one of those matches where there was everything to his game but end product.

The chance at the start of the second half should really have been finished.

Grealish was meanwhile disappointing, some way off the standard of the attackers at the other end.

This was only a group game, that shouldn’t matter too much in the grand scheme of things, but it was a pointer to the performance level that is going to be required when it really matters.

Against all that, PSG – and particularly that trio – were just waiting for moments to pounce; to show what this level of attacking play is really about.

Messi did so much more than that, of course. He did something else only he can.