In the unforgiving world of Formula One, Lewis Hamilton abides at the top. He’s the man to beat, the top earner, the most important voice, the most prominent figure — a Black man alone at the summit of motorsports’ highest echelon. England’s knight in Mercedes armor.

Over the past 15 years, the 36-year-old Briton has won seven world championships, tying the record set by Ferrari’s Michael Schumacher — the German F1 driver who was regarded as the greatest of all time until Hamilton broadsided him from that perch. At Sunday’s Russian Grand Prix, Hamilton rallied through a late rain shower to claim the checkered flag on the way to becoming the first driver in the sport’s history with 100 career victories. And that’s besides his 100 career pole positions. As achievements go in racing, this is beyond otherworldly.

For one thing, racing isn’t like other sports. They don’t win some and lose some. Cars break down, race strategies falter, accidents happen. Confidence cracks under pressure. Drivers can go years without winning. Heading into Sunday’s IndyCar Series finale at Long Beach in California, Scott Dixon, a six-time champion and the series’ active all-time victories leader, had just one win to his name. Jimmie Johnson, the seven-time NASCAR champion who crossed over into open-wheel racing earlier this year, won 27% of the time at his NASCAR Cup racing peak in 2007 — and that’s with vastly more opportunities to try on a 36-race schedule.

In F1, 10 or 15 wins over a career are enough to make a legend. Argentina’s Juan Manuel Fangio, the five-time champion who dominated F1 in the 1950s, has 24 victories. France’s Alain Prost, the four-time titlist who excelled in the ’80s and ’90s, more than doubled that haul. Schumacher, the Ferrari ace, set the bar even higher, winning an unbelievable 91 times in 308 starts. Meanwhile, Hamilton’s 100 triumphs have come in a relatively breezy 281 attempts. Not only is that far and away the highest career success rate of any F1 driver, including Schumacher, who stacked his 91 victories at a 30% clip, it’s also way more victories than some teams on the grid. Even more incredible than that is Hamilton’s 63% probability of landing on the podium, which beats Schumacher’s by 13 points. 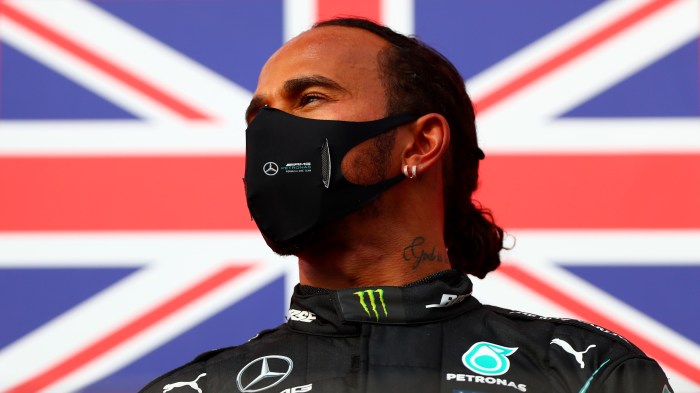 Naturally, there are still those who dismiss Hamilton’s prosperity as the inevitable byproduct of a Mercedes team that has monopolized the sport since 2014. That’s when F1 made the switch from gas-guzzling V8 engines to V6 turbocharged hybrid “power units.” If these new motors somewhat lagged in horsepower, they more than made up for it in seamless acceleration. (Which is to say there is virtually no delay between the driver depressing the throttle and the car taking off in response.) On top of that, Mercedes would not only eke out an advantage in developing the new power unit, but its on-track success armed it with hundreds of millions to spend each year to develop the engine and the car even further.

But then again, it isn’t as if Hamilton has been gliding down a straight and smooth road this whole time. He’s had to drive that supercar on the ragged edge time and again, more than nearly 16,000 race laps, across five continents, through all kinds of humidity and the rain too, of course. He’s stayed in the fight this year even while suffering from persistent fatigue, dizziness and other symptoms of long-haul COVID-19 after testing positive for the virus late last year. He’s had to elbow his way past some quite formidable rivals — first Fernando Alonso (who, after leaving McLaren at the end of 2007, has continued stalking him from the midfield), then Germany’s Sebastian Vettel (a four-time world champion at Red Bull), then another German, Nico Rosberg (a boyhood bestie turned Mercedes teammate turned bitter rival who beat Hamilton to the 2016 crown) and now the Belgian-Dutchman Max Verstappen (the 23-year-old Red Bull Racing wunderkind who held a five-point lead on Hamilton heading into the Russian Grand Prix).

Hamilton had to have the foresight to leave McLaren and sign with Mercedes — which not only hadn’t competed in F1 as a factory team since the mid-1950s, but was offering him a car that Schumacher had previously occupied.

What’s more, Hamilton’s working-class, biracial upbringing did not exactly destine him for a sport where mostly well-heeled white families burn through small fortunes dragging their kids to the top. Hamilton never makes it without his Black Grenadian Brit father, Anthony, juggling four jobs just to keep him in go-karts long enough for Ron Dennis, then principal of the McLaren Mercedes F1 program, to invest. Hamilton is still the first and only Black man in this billionaire boys club whose roots go all the way back to Black chain gangs of the post-Reconstruction era paving the roadways for the first “grand prize” races in the early 1900s.

And yet there was something about Hamilton that was inevitable.

From the moment the Brit broke into F1 in 2007 at age 22, it was clear he would not be taking his sweet time to adapt to the series’ more complex cars and circuits. Nor would Hamilton be taking a back seat to his McLaren Mercedes teammate Alonso, a born wheelman who entered that year as the youngest repeat champion in the sport’s history. But through the first five races of the season, Hamilton finished ahead of Alonso twice while entering into a tie with the Spaniard atop the driver standings.

Win No. 100 kicked off amid cool and slick conditions in Sochi, Russia, that wrong-footed the field off at times and led to some uncharacteristically sloppy driving from Hamilton. The lead-up to the race saw him collide with his jackman in the pits and hit the pit wall during a routine stop, a final mistake that doomed Hamilton to a fourth place on the grid.

When the 53-lap feature unspooled under slate-gray skies, Hamilton was immediately besieged by his rivals and shuffled down to seventh. And while Verstappen, Hamilton’s chief rival, was even farther back in the back after starting dead last, four of the cars ahead of Hamilton were Mercedes-powered — essentially pitting him in a race of shadows. What’s more, two of those cars — which belonged to Hamilton’s old team, McLaren — were coming off of the F1’s only one-two finish of the season. Patiently, Hamilton bided his time and managed his tires. And when he crept into second place by lap 30, a history-making moment that once seemed so out of sight after a winless five-race streak, was within sight once again. “You can win this race!” Mercedes team principal Toto Wolff shouted to Hamilton over the radio.

The only man standing in Hamilton’s way was Lando Norris — like him, a young Brit embarking on his F1 career at McLaren. And over the race’s final nine laps, it was clear Norris was determined to get his first career win by any means necessary. When the Black Sea showers drifted onto the track at last, Norris was firm in his conviction to stick it out to the end, waving off team orders to come in for rain tires. Hamilton, too, dug in his heels, believing he could reel in Norris on his slick tires in time. But in the end, he yielded to team orders and swapped tires — a decision that made the difference. While Norris skittered and slipped and ultimately slid off the greasy track, Hamilton easily overtook him on lap 51 and cruised through to his fifth checkered flag in Sochi, where Mercedes has never lost.

When Hamilton emerged from his Mercedes machine inside parc fermé, the station where cars are parked after the race, he was mostly subdued, pumping a fist low as he calmly jogged over to a barrier to embrace his delirious Mercedes teammates. “The team made a great call right at the end,” said Hamilton, who takes a two-point lead over Verstappen — who shrewdly cleared the Sochi field to finish second. “I’m incredibly grateful to all the men and women here and back at the factory because, wow, 100.”

The moment takes on an even larger meaning off the track. Born to a white mother and Black father, Hamilton identifies as Black. Whether after a race or online, he has faced challenges in a sport that’s been quite comfortable with homogeneity for the past century. During a testing session at Barcelona in 2008, Hamilton was besieged with racial abuse from Spanish fans resentful of his displacement of Alonso — some of them raining down insults in blackface. When Hamilton scored his 99th career win on a contentious overtake of Verstappen that knocked the points leader out of the race on the first lap, the abuse came raining down on Hamilton all over again on the internet.

Anytime questions of diversity and inclusion come up in the sport, he’s always the one who has to answer. When much of the sports world stood up to protest anti-Black racism in the wake of George Floyd’s murder by a Minneapolis police offer in 2020, Hamilton leveraged his massive social media following and his resonant voice in the sport to compel F1 to do the same, starting by kneeling before races. Earlier this month, the Hamilton Commission, an organization the F1 champion launched to address inclusion of Black people in the sport, released a 93-page report that, among other things, outlined three main barriers to entry: accountability and measurement, support, empowerment and inspiration, and engagement. Not surprisingly, those very specific findings were met with vitriol, too.

Set aside the fact that he condemned Hungary’s controversial new anti-LGBTQ+ law earlier this year, Hamilton is looking to do more than win races. Hamilton is inspired by tennis great Serena Williams, a Miami buddy who traveled to Monaco to play grand marshal and cheer him on before this year’s French Open. We are seeing the next generation of Black girls who were inspired by Williams. Hamilton is serious about doing the same for young Black drivers, would-be engineers, aerodynamicists and team principals that he’s armed his commission with $30 million of his own money to speed this change along.

For any other driver, 100 victories would end any debate about his immortality. But for Hamilton, it’s just the beginning. Without fresher faces in his image to keep F1’s progress on course, 100 victories is just a nice round number in a record book for an even more ambitious driver to break someday. Of course, there’s no promising F1 will reach that point. And yet, at this point, only a fool would dare bet against the closest thing in racing to a sure thing.