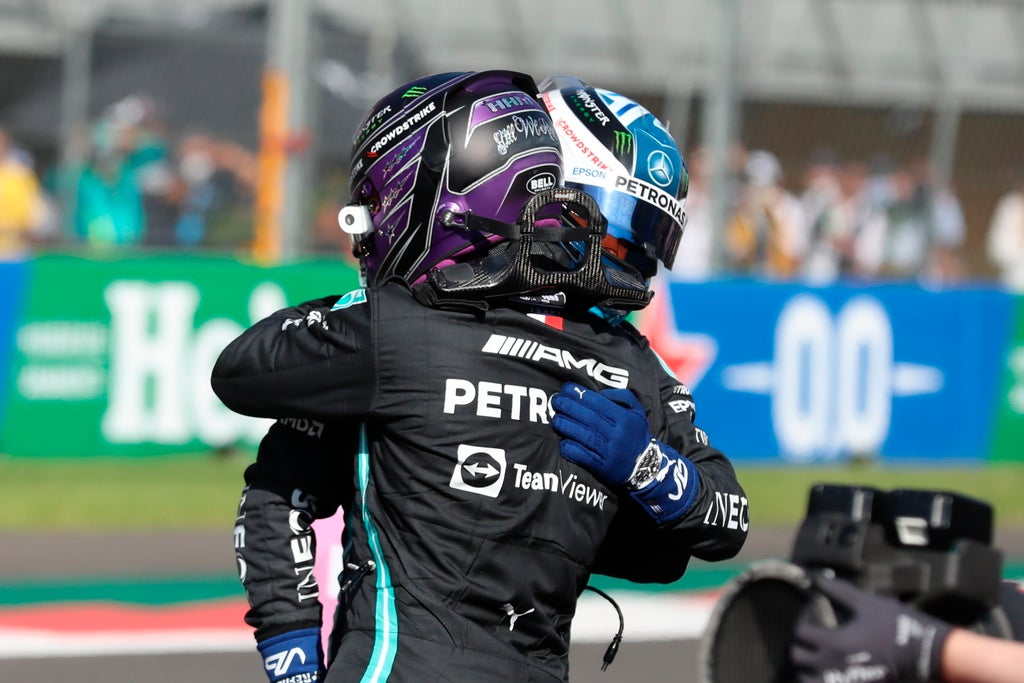 Hamilton’s hopes of a record-breaking eighth world crown were dealt a major boost in the breathless Mexico City air after his Mercedes team locked out the front row with Valtteri Bottas on pole position.

All the signs heading into qualifying pointed towards a Verstappen triumph following Red Bull’s dominance of practice.

But the championship leader finished only third. His team-mate Sergio Perez – the home favourite in front of 110,000 partisan fans at the Autodromo Hermanos Rodriguez – qualified fourth.

Hamilton is 12 points behind Verstappen, but the Briton’s front-row slot will provide the encouragement that he can claw back ground with just five races left.

“Valtteri did an amazing job and I am so proud of him,” said Hamilton, who was jeered by the swathes of Red Bull fans supporting Perez.

“We did not think we had the pace here this weekend – we were as much as six tenths behind in practice – so to lock out the front row is pretty special.

“I am just as shocked as anyone. It is a real surprise to see that we are first and second and I don’t have an answer for it but I will take it.

“Our practice results show we are behind Red Bull in qualifying and race trim, so who knows what will happen tomorrow. But track position is important here and we will have to work as a team.”

The venue in Mexico’s capital city sits 2,285 metres above sea level and Bottas delivered a breath-taking lap with his first run in Q3, finishing 0.145 seconds clear of Hamilton, with Verstappen three tenths adrift.

None of the top three improved on their second attempts with Perez appearing to scupper Verstappen’s lap when he followed Yuki Tsunoda by falling off the road.

“Unbelievable, such a dumb idiot,” said Verstappen, who was forced to slow down. Whether he was referring to Perez or Tsunoda is unclear.

The stage is now set for a hell-raising start, with all eyes on the 220mph stampede to the opening right-hand corner.

The run down to the first turn is among the longest on the calendar and Verstappen will aim to take advantage of the slipstream from the Silver Arrows in front.

“There is a tow effect so Valtteri and I will no doubt work as a team to try and hold one-two,” added Hamilton.

Verstappen said: “It is not a great place to be, given we have been so competitive this weekend, but still it is a long run to turn one, and I am third – on the cleaner side of the track – so let’s see what we can do.”

Pierre Gasly finished fifth for AlphaTauri, while Lando Norris took 10th but he will be thrown to the back of the grid after taking on his fourth engine of the season here – one more than is permitted.

Q1 was red-flagged when Lance Stroll crashed out at the final corner. Stroll was unharmed in the accident, but he sustained significant damage to his car.

When Q1 eventually resumed, Fernando Alonso was the major casualty, knocked out in 16th.

But the Spaniard will be bumped up the grid with his Alpine team-mate Esteban Ocon and Tsunoda thrown to the back following engine penalties.

George Russell finished 13th, but he will also serve a grid drop – five places for taking on a new gearbox.