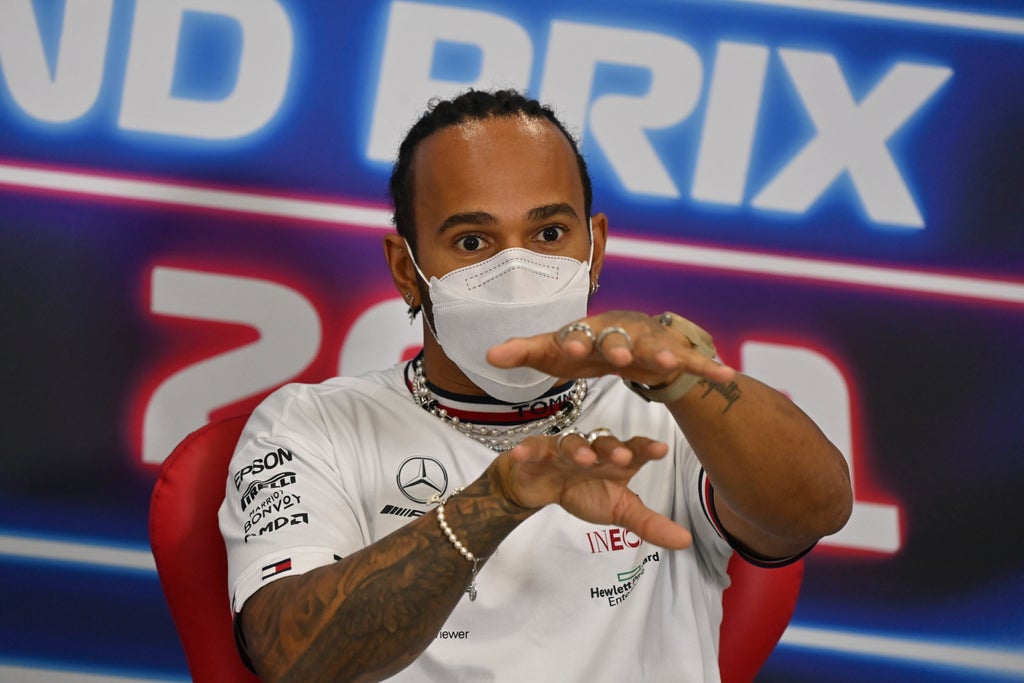 Lewis Hamilton admits new camera angles of his run-in with title rival Max Verstappen at the Brazilian Grand Prix have changed his decision on the incident – but stopped short of calling for the Red Bull driver to be hit with a retrospective punishment.

Hamilton took the chequered flag at Interlagos last weekend to close the gap in the drivers’ championship to 14 points with three races remaining.

But Verstappen escaped punishment for running his rival off the road as they duelled for first position on lap 48.

Mercedes have since launched an appeal against the decision not to investigate the incident now that onboard camera footage has been released. After hearing Mercedes’ appeal, a verdict will be announced by the FIA on Friday.

Ahead of the inaugural Qatar Grand Prix this weekend, Hamilton said he has a “different viewpoint” having all-but written off the flashpoint as a racing incident immediately after the race.

“I think the reason I said that at the time was the mentality you have to take,” he said. “If you sit in the car in the moment and complain it will only hold you back. In the moment I could only move forward.

“It is difficult to judge when you haven’t seen all the angles. Of course I’ve relooked at it and I have a different viewpoint, naturally, now. But I’m just putting all my energy into setting up the car and making sure I’m in the right head space.”

Asked if he now felt Verstappen deserved punishment – with a five-second penalty enough to drop him behind Hamilton’s Merecedes team-mate Valtteri Bottas in the race classification and cut his lead to just 11 points – the reigning world champion was more tight-lipped.

“Honestly, it is not something I want to dive much more into,” he added. “I have seen the onboard footage that came out but as I said. The last race I was trying to focus on the fact we did something that was quite remarkable.

“Right now, I know the team are in discussion at this point so I am just leaving them to it. I’ve not actually really been a part of it (the appeal). Of course I’ m aware of it and am fully supportive of my team.

“I have no idea where they are going with the discussion or what could be the outcome, I haven’t given it any energy or time at all.”

Verstappen insists he has not watched the new angles and defended his driving during the incident.

“I didn’t need to look at the footage because I was driving the car and I knew exactly what happened,” he said.

“Like I said, I thought it was a great battle and I had a lot of fun. At the end of the day they won the race – fair enough they were faster than us but it was a good battle.”

The decision on whether a review takes place is set to be decided later on Thursday afternoon, with Verstappen unconcerned that this season’s enthralling title battle could be made ugly with an off-track scrap between Red Bull and Mercedes.

“I think it is quite normal when it is between two teams, not just one team with two drivers,” he said.

I just have to focus on what is happening on track of course and the rest will be dealt with.

“To be honest, I don’t think about it too much. It is not in my hands these kind of things, I am a driver and I need to focus on what is happening on the track.”