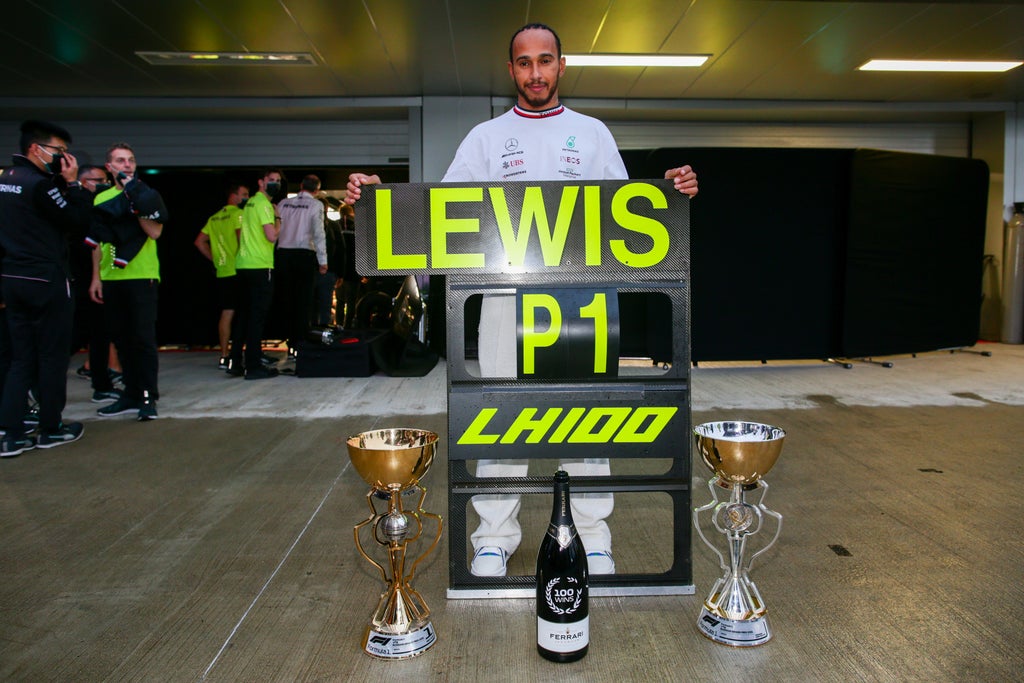 Lewis Hamilton could stretch his record tally of race wins to 120 after becoming the first Formula One driver to reach a century, the sport’s managing director Ross Brawn said on Monday.

The seven-times world champion, who will turn 37 in January, has two more seasons on his Mercedes contract and few doubt he will taste further success.

Two points clear of Red Bull’s Max Verstappen at the top of the standings after winning Sunday’s Russian Grand Prix in Sochi, the most successful driver in the history of the sport is not about to let up.

“Who knows where it’s going to end up?” said Brawn in a column for the official website, predicting the Briton would continue to win every year.

When Michael Schumacher retired with a record 91 wins, some observers questioned whether anyone would ever be able to match the Ferrari great’s achievement. Brawn, his friend and technical director, was one of them.

At that point in history, the German had 40 wins more than previous record holder Alain Prost and 50 more than Ayrton Senna.

Both he and Vettel owe much to the fact that Formula One seasons now feature far more races than in even the fairly recent past, with 23 due next year after a record 22 scheduled for 2021.

The very first championship in 1950 featured six grands prix as well as the Indianapolis 500 – a race the Formula One drivers avoided.

Hamilton has now won more races than triple world champion Jackie Stewart, the most successful British driver before him, even started. The Scot called it quits in 1973 after winning 27 of his 99.

Verstappen, who turns 24 on Thursday, has competed in 134 races and won 17 — the first at 18 making him the youngest ever winner.

If anyone is going to challenge Hamilton’s record, the Dutch driver would be a leading contender.

One record that Verstappen can never match, however, is Hamilton’s feat of winning in every season he has competed, starting from his sixth race with McLaren in Canada in 2007.

Since 2014, the year after he joined Mercedes, Hamilton has averaged more than 10 wins a year – a number he is unlikely to match this time with a current tally of five and seven rounds remaining.

Verstappen has won seven of them so far.

Schumacher, by contrast was not a winner until his second season, and his 18th race, and drew blanks at the end with Mercedes in 2010-12.