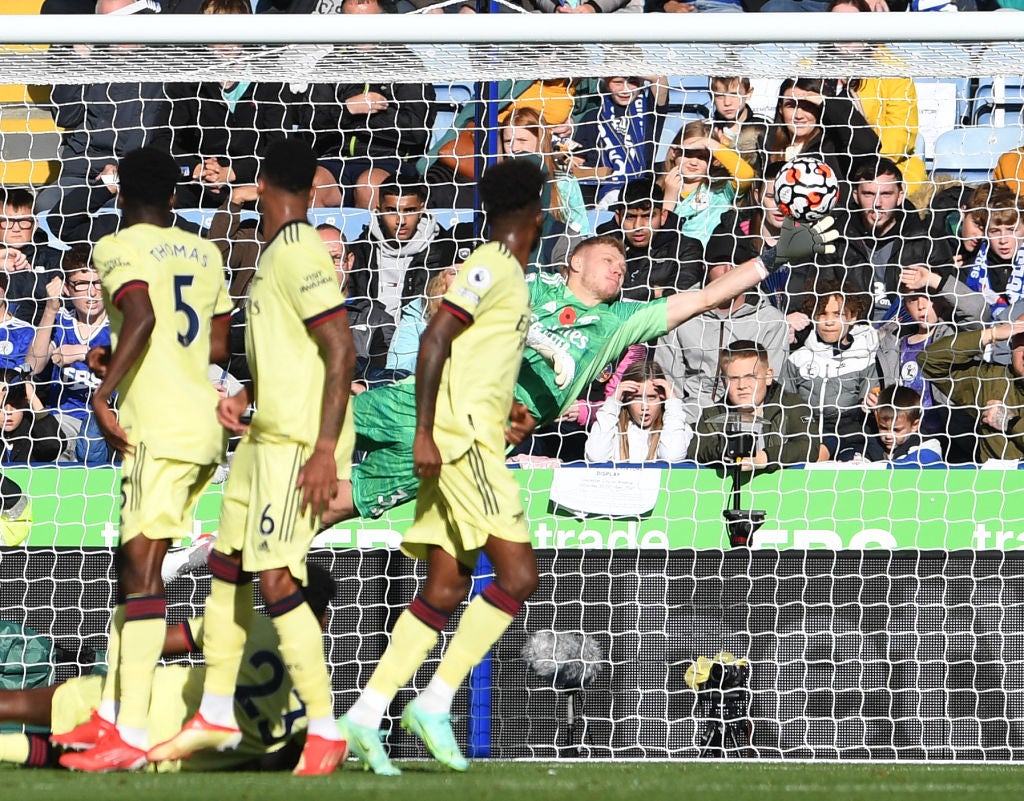 Blink and you may have missed it. Or perhaps you ignored it because there is an unwillingness to divorce Arsenal from their Banter FC association. Maybe, less cynically, their form has gone under the radar because it has been so quietly consistent. At King Power Stadium, it smacked you in the face: Arsenal are very good, Mikel Arteta has married a solid defensive structure with some fine, relentless offensive play and Aaron Ramsdale should be in England’s goal.

It took five minutes for the evidence to materialise against Leicester. The visitors were slicing through on rotation in the opening stanza, helped by their goalkeeper’s excellent distribution, and were duly rewarded when Bukayo Saka’s corner skimmed off the head of Jamie Vardy and on to Gabriel.

At pace, the defender directed a header across Kasper Schmeichel and into the top left corner. Watching Arsenal score from a dead-ball situation has become regular viewing courtesy of set-piece coach Nicolas Jover’s superb work on the training pitch.

Having scored five in the space of just nine matches from this avenue prior to kick off, they solidified their status as the Premier League’s top set-piece scorers.

Leicester, who had also shaken off a stumbling start to the campaign, were on the ropes. Arsenal kept coming at them and were encouraged by the passiveness from the home side.

“We have returned to the fundamentals, better tempo, stronger organisation,” Brendan Rodgers had remarked off their improved form, which included dismantling Manchester United.

Those tenets were largely anonymous in the first half, perfectly demonstrated for Arsenal’s second goal. Saka, offered space, time and the opportunity to showcase his class again, was out on the right. He carried the ball up, eventually attracted two markers, which opened up play for Alexandre Lacazette.

The forward received possession from Saka, but shot was half-cleared by Luke Thomas and pinballed towards Emile Smith Rowe. He met it first-time, sidefooting past Schmeichel as Leicester rued their non-existent pressure and defending.

When they did manage to make Arsenal uncomfortable, Ramsdale stepped up and snuffed out danger in an all-round goalkeeping masterclass.

He pulled off a top-tier save to tip away a Kelechi Iheanacho thunderbolt from 25 yards out. Then Ramsdale produced what Schmeichel Senior described as the best save he’d seen in years.

Leicester had a free kick on the edge of the area, which James Maddison stood over and crafted a delightful effort that was swirling into the top right.

Ramsdale judged the flight, flung himself towards it and flipped the strike onto the crossbar with a strong hand. The ball dropped inches away from post, with Jonny Evans reacting rapidly to force home but it squirmed under Ramsdale’s body with Thomas Partey hooking clear.

Rodgers replaced Daniel Amartey and Iheanacho with Harvey Barnes and Ademola Lookman as Leicester attempted to throw the kitchen sink, fridge, and all the pots and pans at Arsenal to remedy their first-half folding.

The game ultimately morphed into The Aaron Ramsdale Story. Leicester’s change to a back four provided greater joy out wide and they conjured chances with Arsenal backing themselves to soak up pressure given the performance of the man in front of the sticks.

Ramsdale spread himself to block from Lookman from a tight angle, then denied Barnes and got out quickly to thwart the midfielder again by making himself big before comfortably claiming a Youri Tielemans corner.

No matter what Leicester tried, the goalkeeper wondrously had the antidote for it.

And so it’s nine matches unbeaten for Arsenal across all competitions, with seven victories in that period and just four goals conceded. Arteta has a solid defence providing the foundation for their progressive players to thrive.

The manager also has Ramsdale to bank on. That initial £24 million fee is shaping up to be quite the steal cutting through the noise of the early criticism.