Jesse Marsch spoke with great relief of Leeds United’s late win. For the record, they drew. It was not spin, more so that the American was caught in one, much like everyone else inside Elland Road.

For on a confused afternoon of noisy support and just as voluble protest, a breathless match climaxed with a goal that could well keep Marsch’s team in the Premier League, and him in a job.

It did not matter that the first half ended with jealous cats bemoaning the number of lives afforded to Leeds, nor that Brighton’s scorer Danny Welbeck then headed wide of an open target four minutes from time. 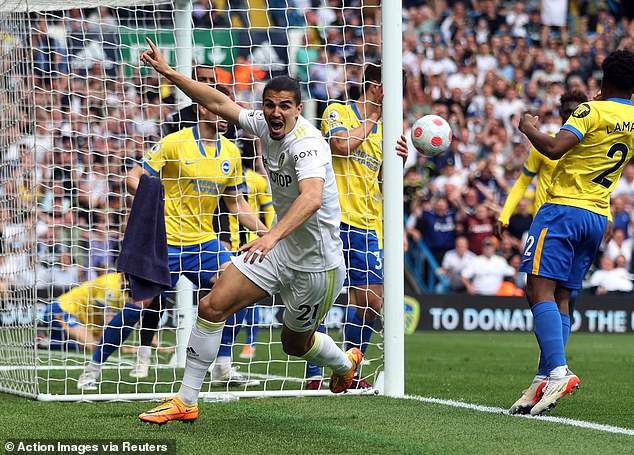 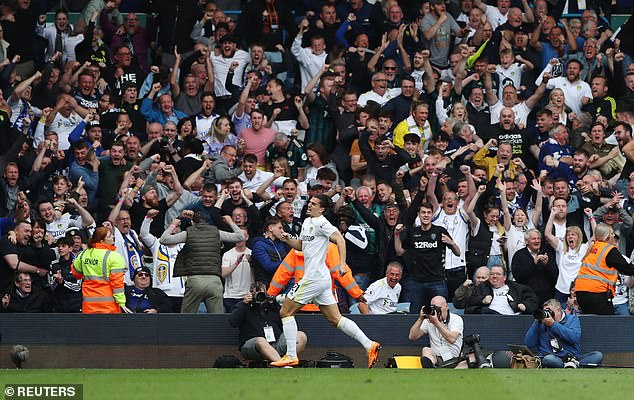 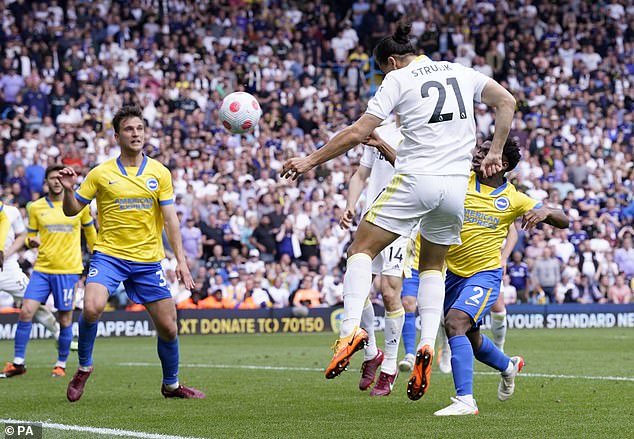 What mattered was that Leeds won. Correction, drew. But that was how momentous Pascal Struijk’s goal really did feel. It arrived in the second minute of injury-time. In the moments before, the home side’s survival hopes were fading as quickly as the smile that Marsch has worn so defiantly in recent weeks.

But here, finally, was genuine cause for the boss to beam, and with it 36,000 happy faces inside Elland Road.

You could barely see any green inside the six-yard area, so crowded was it as the ball dropped to Joe Gelhardt on the by-line. There was, then, much work for the young forward to do to fashion anything resembling a chance.

What followed was genius, sitting down defender Lewis Dunk with the cheekiest of scoops over his sliding challenge before poking the ball high to the far post. He had done his bit. The cross was begging to be converted and substitute Struijk, a defender by trade, answered those prayers with a striker’s header of zero compromise. It raised the roof, sprits and, crucially, Leeds to 17th. Stay there and they will be playing top-flight football next season. But given Burnley have two still to play, their destiny remains out of their hands.

The club had paraded the legends of 1972 and 1992 on the pitch before kick-off, FA Cup and First Division winners respectively. The next time we see the likes of Leeds midfielder Kalvin Phillips back here may well be an anniversary to celebrate the promotion team of two years ago. That, or in the colours of another club.

For despite the euphoria of Struijk’s goal, Leeds are still favourites to go down ahead of next Sunday’s trip to Brentford. It certainly felt like they were headed back to the Championship for the majority of this game.

Chief executive Angus Kinnear did not shy away from labelling it ‘the most important in our recent history’ in his programme notes. But he also managed to irritate supporters by calling on them to ‘unburden’ the team of the tension arising from such a fixture.

Careful, Angus. The best way to relieve the players of pressure, you might argue, would have been to strengthen their number in the New Year. Instead, Leeds spent nothing. They gambled by refusing to spin the wheel and then watched as the odds continued to stack against them.

So, if Leeds are to be relegated and a blame game ensues, it will likely be the board and majority owner Andrea Radrizzani who take the bulk of the flak. Then Marsch. Then the players. And only then former boss Marcelo Bielsa, even though his stubborn refusal to tailor his tactics caused that erosion of belief in the first place. In truth, they are all culpable.

But perhaps Kinnear was onto something when hinting at a nervousness about the crowd. They groaned en masse when Rodrigo was slow to release the ball in a position of promise and was robbed by Yves Bissouma on 21 minutes. They were soon lamenting the loss of a goal, not just possession. 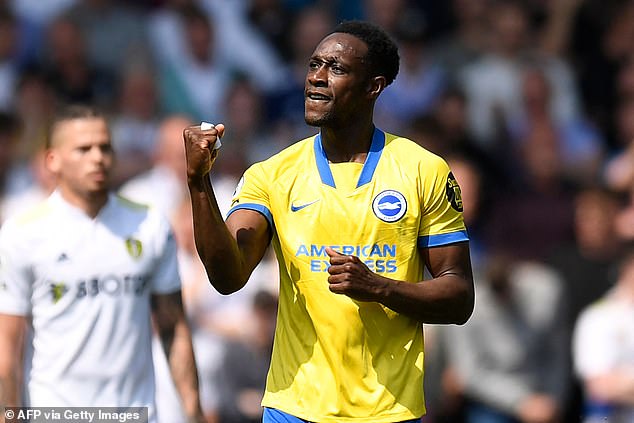 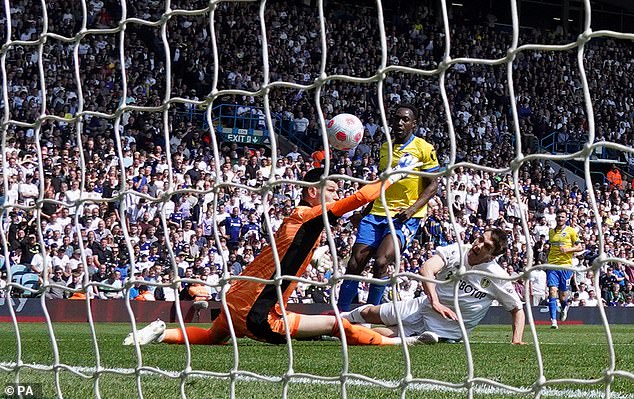 Bissouma broke and slipped a pass through for Welbeck. He should have been barged out wide by Diego Llorente, recovering inside the area. But the Spaniard can be a witless defender and he contrived to show Welbeck a sight at goal, falling over in the process. How is he a current international?

Not that Welbeck, the former England striker, was bothered about the answer to that puzzler, dropping the most delightful chip over Illan Meslier to give Brighton a deserved lead.

Quite how half-time arrived with score still at 0-1 was as big a mystery as Leeds continuing to attempt to play out from the back. Note: they can’t.

There were plenty of other moments to cause alarm in the opening period. Rodrigo was booed when misplacing a pass and then ironically cheered when completing one. That felt very much like a burden being placed, not removed. 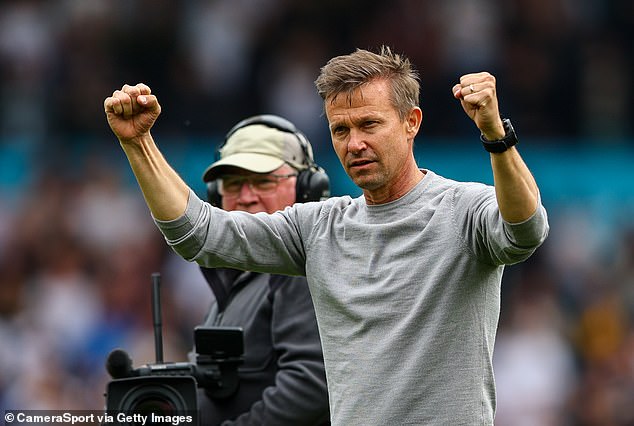 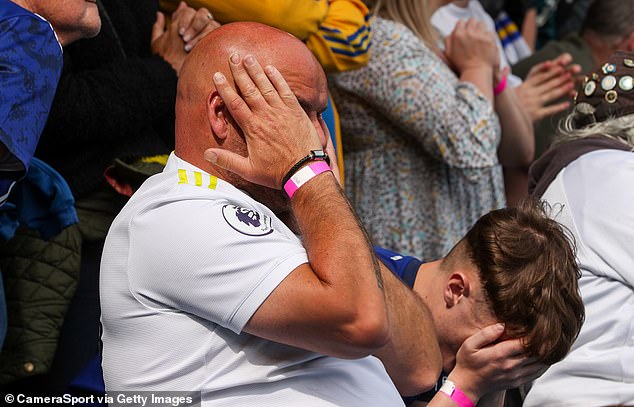 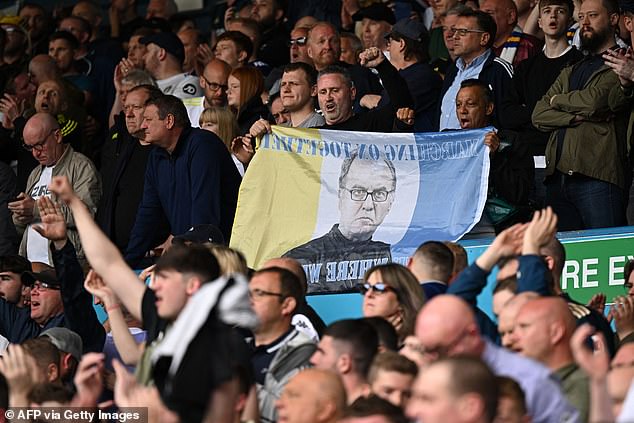 Phillips then slammed a water bottle into the turf after an exchange with Marsch during a break in play – a show of frustration or dissent? Either way, it was not a good look. Nor was Raphinha’s petulant arm toss after a Gelhardt pass went astray.

The hosts, though, were better in the second half, drawing a string of saves from the inspired Robert Sanchez. But as Leeds began to fade, the noise grew – in part a desperate attempt to encourage, but as much in condemnation of the hierarchy.

Top of the hit parade was ‘Sack the board’, followed by a poisonous airing of ‘Sell the club and f*** off home’ and, somewhat cuttingly for Marsch, the sound of Bielsa’s name.

But all of that made way for ecstasy in the dying seconds with a goal that has given life to Leeds. No wonder it felt like a winner. 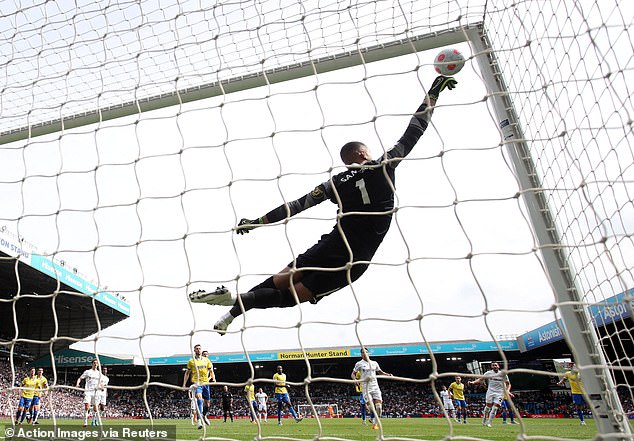