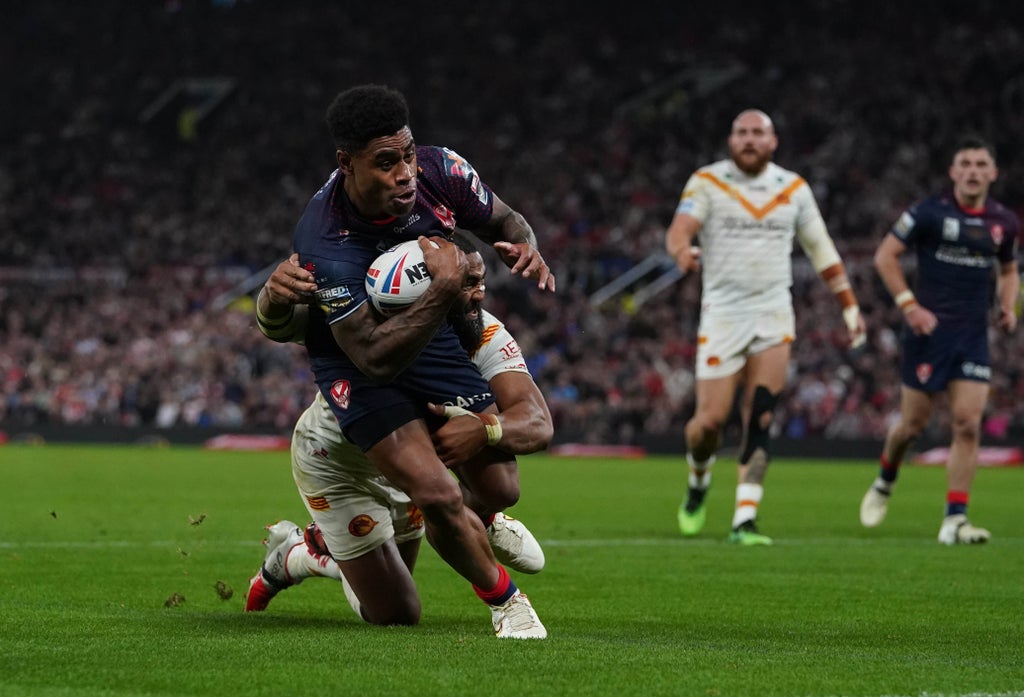 Departing centre Kevin Naiqama delivered the perfect leaving gift with a brace of tries to help St Helens complete a hat-trick of Grand Final victories in Super League’s showpiece game of the season.

The Fiji captain, who is returning to Australia after three years in Super League, scored a try in each half to help his side to a 12-10 win over Catalans Dragons in front of a crowd of 45,177 at Old Trafford.

It was the second lowest attendance in the 24 years of the Grand Final but still welcome after the 2020 showpiece was played behind closed doors at Hull’s KCOM Stadium due to the pandemic.

Second rower Mike McMeeken scored the Catalans’ only try – while Saints were down to 12 men following the first-ever Grand Final sin-binning of winger Tom Makinson – which promised to deliver a fairytale outcome for the French team in their first appearance at Old Trafford.

But Naiqama pounced for the all-important score 15 minutes from the end and Lachlan Coote, another man playing his last match for the club, kicked his second goal of the game to wrap up the scoring.

Naiqama was named man of the match for his performance and was overcome with emotion as he received the Harry Sunderland Trophy from past winner Rob Burrow the former Leeds favourite who is battling motor neurone disease.

The outcome meant long-serving captain James Roby led his side to the coveted three-peat, matching the achievement of Leeds from 2007-09, with an eighth Grand Final win, which equals the record of the Rhinos.

Kristian Woolf’s side were also able to complete the league and cup double for the second time following their Wembley victory in July.

The Dragons were encouraged before kick-off by words of support from Frenchman Eric Cantona, once of these parts whose mother hails from the Catalan region, and boosted by the return from injury of England captain Sam Tomkins.

And Catalans stand-off James Maloney, who is 35 and hanging up his boots as a professional at the end of the game, became the oldest player to score in a Grand Final when he put his side in front with a 10th-minute penalty.

However, it was against the run of play as St Helens dominated the opening quarter, taking a particular shine to the Catalans’ left-sided defence and it was no surprise when Naiqama scored the game’s first try, slicing through the Dragons defence on 12 minutes.

Coote missed the conversion but added a penalty to make it 6-2 before Maloney kicked a second goal to cut the gap to two points at half-time.

England stand-off Jonny Lomax had been prominent in Saints’ impressive opening but his effectiveness appeared to be dulled after a high tackle from Ben Garcia midway through the first half.

Catalans struggled to find a chink in a Saints defence that conceded an average of a little over 10 points a game throughout the regular season and it was only while their opponents were down to 12 men that they were able to breach the blue wall.

Winger Tom Davies palmed the ball back from Josh Drinkwater’s lofted kick into the arms of McMeeken and the former England second rower was able to force the ball over the line.

That followed the sin-binning of Makinson for a high tackle on Yaha after the Dragons right winger had caught Drinkwater’s kick to the corner.

Maloney converted McMeeken’s try to put his side four points in front and the Dragons were indebted to a timely interception from Tomkins, following a break by St Helens second rower Joe Batchelor, to keep it that way until Naiqama ran onto Lomax’s grubber kick to score his second try on 65 minutes.

That levelled the scores and Coote kicked his second goal to nudge his side back in front with what proved to be the final score of the game.