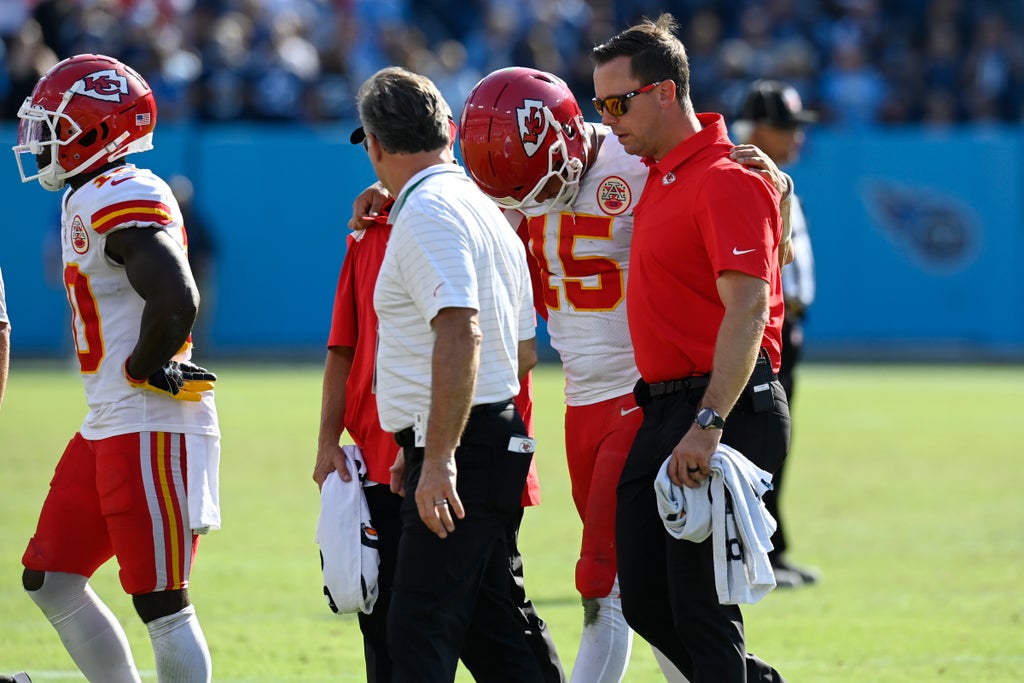 Quarterback Patrick Mahomes left the game with a head injury as the Kansas City Chiefs slumped to a 27-3 defeat against the Tennessee Titans.

Mahomes was on the ground after being sacked for the fourth time when he was accidentally hit in the face by the thigh of Jeffery Simmons in the fourth quarter.

The 26-year-old, who was named MVP when Kansas City won Super Bowl LIV, looked groggy as he we was helped off the field and did not return to the game as the Chiefs failed to score a touchdown in the regular season for the first time since he became the full-time starter.

The Titans led 27-0 at half-time as Derrick Henry rushed for 86 yards on 29 carries, caught two passes for 16 yards and also threw a five-yard touchdown pass to MyCole Pruitt.

The Cincinnati Bengals moved top of the AFC North after thrashing divisional rivals Baltimore 41-17 on the road.

Ja’Marr Chase’s 82-yard reception was the pick of the touchdowns and Samaje Perine ran in the final score of the game from 46 yards as Ravens quarterback Lamar Jackson was benched with seven minutes remaining in the fourth quarter.

Both sides now stand at 5-2 with the Bengals on top courtesy of their 2-0 divisional record.

The New England Patriots improved to 3-4 after a 12th consecutive win over the New York Jets, who lost quarterback Zach Wilson to a knee injury early in the second quarter of the 54-13 rout.

Mac Jones threw two touchdowns and Damien Harris and JJ Taylor both ran in two more as the Patriots secured their first home win of the year.

Younghoe Koo kicked a 36-yard field goal as time expired to give the Atlanta Falcons a 30-28 victory over the Miami Dolphins, who had taken the lead with less than three minutes remaining after Tua Tagovailoa threw his second touchdown pass in the fourth quarter.