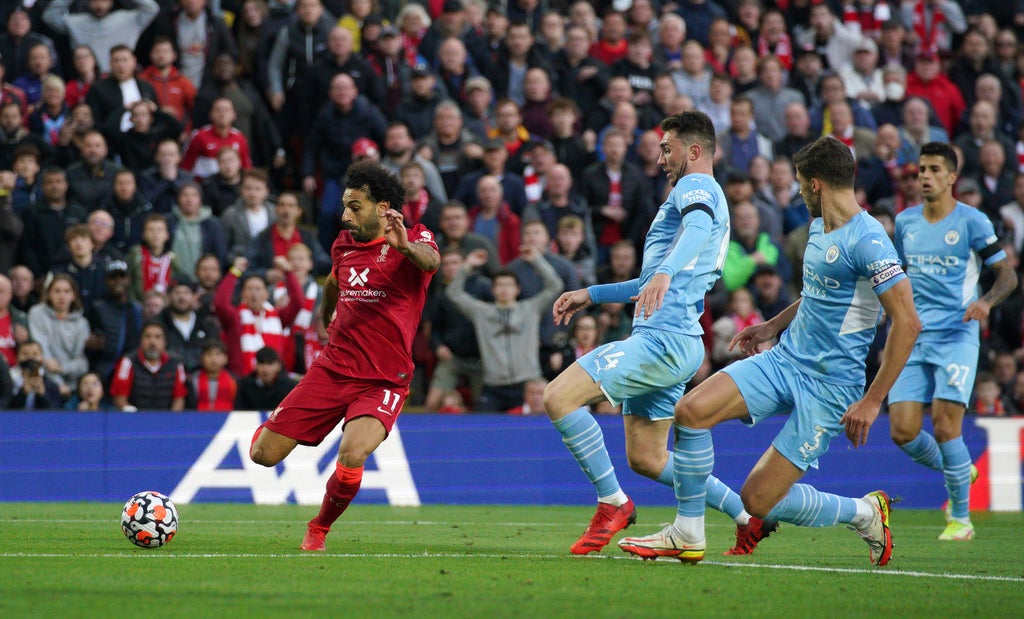 Liverpool manager Jurgen Klopp believes Mohamed Salah’s wonder goal in the 2-2 draw with Manchester City at Anfield will still be talked about in 60 years’ time.

City, who had suffered at the hands of Lionel Messi in their midweek Champions League defeat to Paris St Germain, had seen Phil Foden cancel out Sadio Mane’s opener only to go behind again to a brilliant individual goal of which the diminutive Argentina international would have been proud.

Salah twisted and turned past Joao Cancelo, Bernardo Silva, Aymeric Laporte and Ruben Dias before firing an angled right-footed shot inside the far post for his ninth goal in as many matches.

Liverpool are still to tie down the Egypt international to a new contract with just over 18 months remaining on his current deal but this effort – the seventh successive match in which he has scored – highlighted just how valuable he is to them.

“The second goal only the best players in the world score goals like this,” said Klopp on an afternoon when the club marked the death of Roger Hunt, their all-time leading league goalscorer.

“The first touch, the first challenge he wins then putting it on his right foot and finishing the situation was absolutely exceptional.

“This club never forget these things so people will talk about this goal for a long time and in 50 or 60 years’ time they will remember this goal.”

Salah’s goal was not enough to win the game however as Kevin De Bruyne struck nine minutes from time but Klopp said, on the balance of play over 90 minutes – Liverpool were completely out-played in the first half – a point was satisfactory.

“Quite an exciting game with two completely different halves. The first half was exactly how we shouldn’t do it against City, the second half was how we should do it.

“I don’t remember a chance for us in the first half and I was really happy for the half-time whistle.

“We didn’t change anything. Things like this happen with the dominance City can put on the pitch and our biggest problem was that we didn’t play football.

“We needed to start playing football in the second half, we did that immediately and that was obvious to everyone.

“If we had played only the second half I would have actually have liked to have won the game but together with the first half I think a point is fine.”

Pep Guardiola was furious when James Milner was not shown a second yellow card for a foul on Bernardo Silva a couple of minutes before Salah’s goal, remonstrating with fourth official Mike Dean.

“It is yellow card. Maybe he (referee Paul Tierney) believed it was not yellow card,” he said.

“In these games so tight he has to. It doesn’t mean you are going to win against Liverpool in Anfield but it is too obvious this action, to give James the second yellow.”

Guardiola felt his side responded well to the defeat to PSG and is satisfied with their week.

“We were in the game and we came good not just once but twice and that makes me incredibly satisfied,” he added.

“Always I believe the way a team loses shows how good a team is and the way we lose in Paris shows me we are good.

“It is in the bad moments you have to make a step. After the way we play the first half and lose (be behind) 1-0 and then 2-1 is still good.

“That won’t make you champions but the satisfaction is there.”