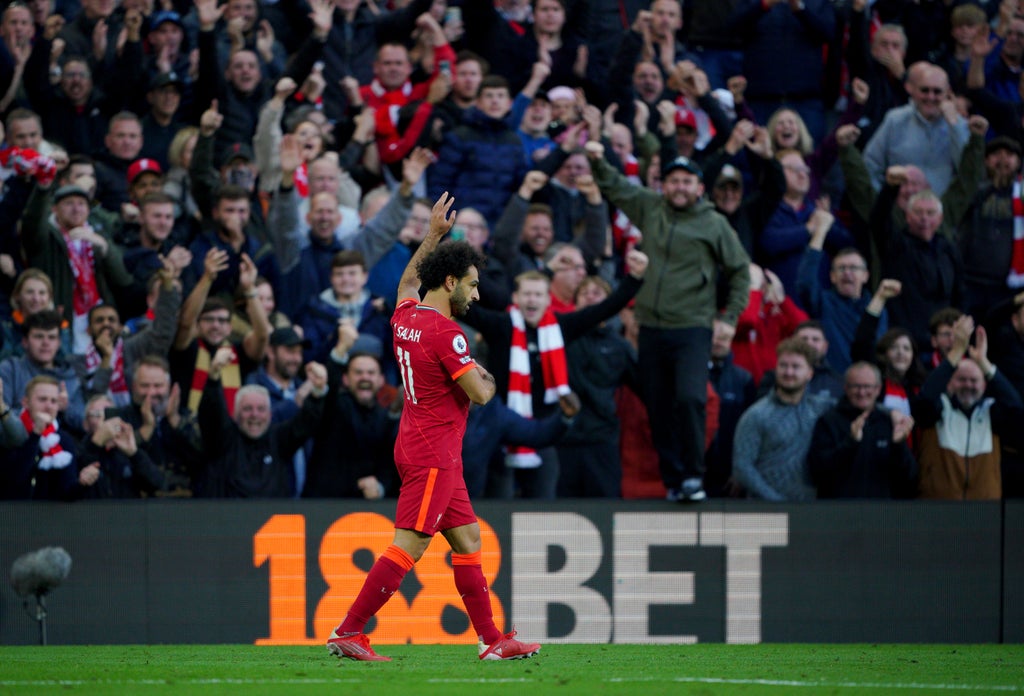 Salah scored for the seventh successive match this season and eighth time in nine outings – only Burnley have kept him out – after a superb weaving run inside the City penalty area.

It was not good enough for the winner as Kevin De Bruyne equalised – as Phil Foden had done earlier to cancel out Sadio Mane’s opener – with nine minutes to go but Klopp felt it was a fitting way to mark the death of Roger Hunt, the club’s all-time leading league scorer who died on Tuesday.

“The second goal only the best players in the world score goals like this,” said Klopp.

“The first touch, the first challenge he wins then putting it on his right foot and finishing the situation was absolutely exceptional.

“This club never forget these things so people will talk about this goal for a long time and in 50 or 60 years’ time they will remember this goal.”

City boss Pep Guardiola was happy with his side’s performance after losing to Paris St Germain in the Champions League in midweek.

However, he was less enamoured with referee Paul Tierney for not showing James Milner a second yellow card for a foul on Bernardo Silva moments before Salah scored.

“It is yellow card. Maybe he (referee Paul Tierney) believed it was not yellow card,” said Guardiola, who was booked for remonstrating with fourth official Mike Dean.

“In these games so tight he has to. It doesn’t mean you are going to win against Liverpool in Anfield but it is too obvious this action, to give James the second yellow.”

City have also reported to Liverpool an alleged spitting incident reportedly involving a fan and their backroom staff the during the game.

Guardiola said he was not aware of the incident at the time but is confident the host club will take the necessary action.

“I didn’t see it, I heard it. The people tell me this happened,” he added.

“I am pretty sure Liverpool FC is going to take a measure against this person. I know Liverpool is greater than these actions.

“In every club there are persons who make a bad action.”

It is understood Liverpool are investigating the incident and are looking at CCTV footage from that area of the ground.