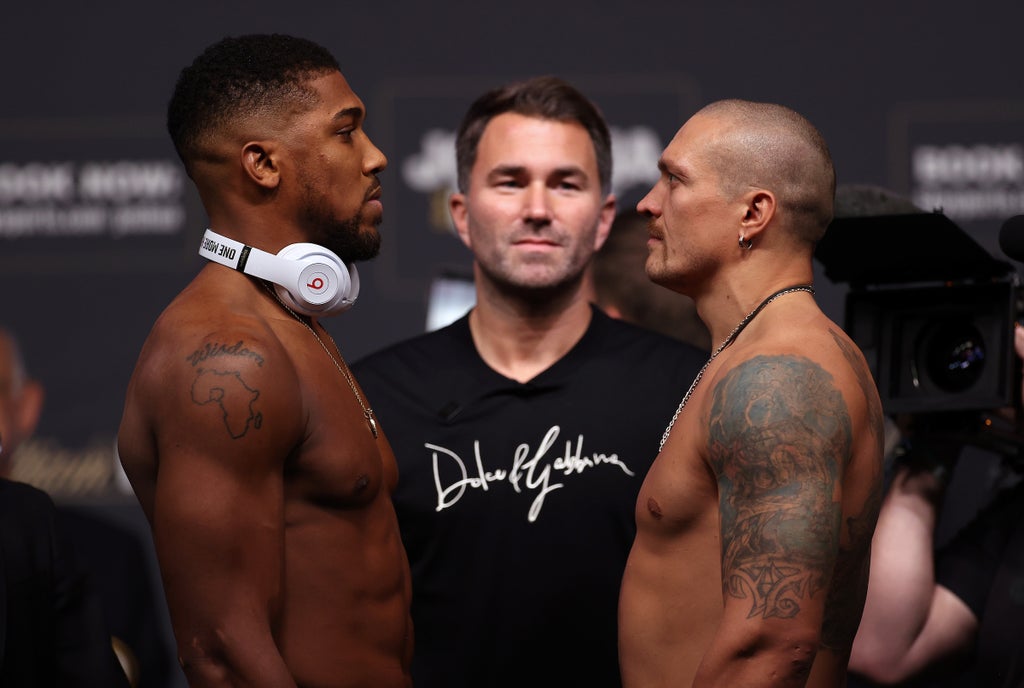 I want to deliver a knockout – Anthony Joshua

Follow live coverage as Anthony Joshua fights Oleksandr Usyk at Tottenham Hotspur Stadium in his latest defence of his unified world heavyweight titles. The Briton, who holds the IBF, WBO and WBA belts, takes on the former undisputed cruiserweight world champion, with the Ukrainian banking an opportunity to become a two-weight world champion in just his third fight since moving up in weight.

A brutal knockout of Kubrat Pulev last time out reestablished AJ’s power, but a contractual clause prevented an all-British undisputed fight against WBC champion Tyson Fury, who is now set for a third fight with Deontay Wilder in Las Vegas next month. While Usyk dealt with a rough and rugged Derek Chisora over 12 energy-sapping rounds, setting up an intriguing stylistic battle with AJ tonight.

Joshua, who is destined to earn £15m for this fight, looked to be in tremendous shape at the weigh-in, having tipped the scales at 240 pounds, with Usyk also looking excellent at a career-high 221 pounds, with both men displaying respect in the final face-off before meeting in the ring.

Follow live round-by-round updates, undercard results, analysis and reaction below from a big night of boxing at Tottenham Hotspur Stadium:

Two delicious left hands from Hatton as he looks to ramp things up at the beginning of the fifth round. Martinez doesn’t budge though and he fires back with equally impressive head and body work.

There are flurries of impressive shots for Hatton but it’s simply not enough. At best Martinez is probably one point ahead. At worst he could be out of sight and over the hill.

This is a really close fight. The action picks up a bit more again in the fourth as Hatton works the body with his lead hand before Martinez comes back with some nice body shots of his own. Tit for tat.

With a home crowd you would (somewhat sadly) expect these close rounds to go Hatton’s way. But you never know, he needs to make sure. And he isn’t at the moment.

Lawrence Okolie watching on as he prepares to defend his WBO cruiserweight title this evening. The Olympian looks in tremendous shape ahead of his defence against Dilan Prasovic.

Really nice left hook from Hatton towards the end of a pretty quiet third round. Martinez still looks very comfortable in there, strutting around as if he is only just getting started.

Hatton probably behind on the cards after three rounds. Much, much closer than we all thought.

This has become a slugfest already. Martinez is landing too frequently at the moment. Hatton comes back with some decent left hooks of his own but his feet are under him and he’s too far away when trying to land the right.

Oh, hello! Martinez has started like an absolute train! He clips Hatton with a couple of glancing blows and then gets through with a superb uppercut-right hook combination! Hatton looks a little wobbly on his legs for a moment and Martinez throws his arms up as if to say ‘I can deal with all you’ve got’.

Only six rounds, this. Martinez definitely won the opener.

And here comes the challenger. Oleksandr Usyk is also in the building. We are just two hours away until the Ukrainian steps into the ring with Anthony Joshua.

Castillo update from Hearn. The Dominican fighter was brutally knocked out by Callum Smith earlier this evening.

Here we go then with the third televised fight of the evening. Florian Marku and Callum Smith have already picked up very different victories. Now it’s the turn of Campbell Hatton, the son of legendary British fighter Ricky.

Ricky is ringside to watch his son this evening. Campbell, who is campaigning at lightweight, will want to put on a show for those in the Tottenham Hotspur Stadium. It’s filling up very nicely now.

Here is the world heavyweight champion arriving at the stadium.