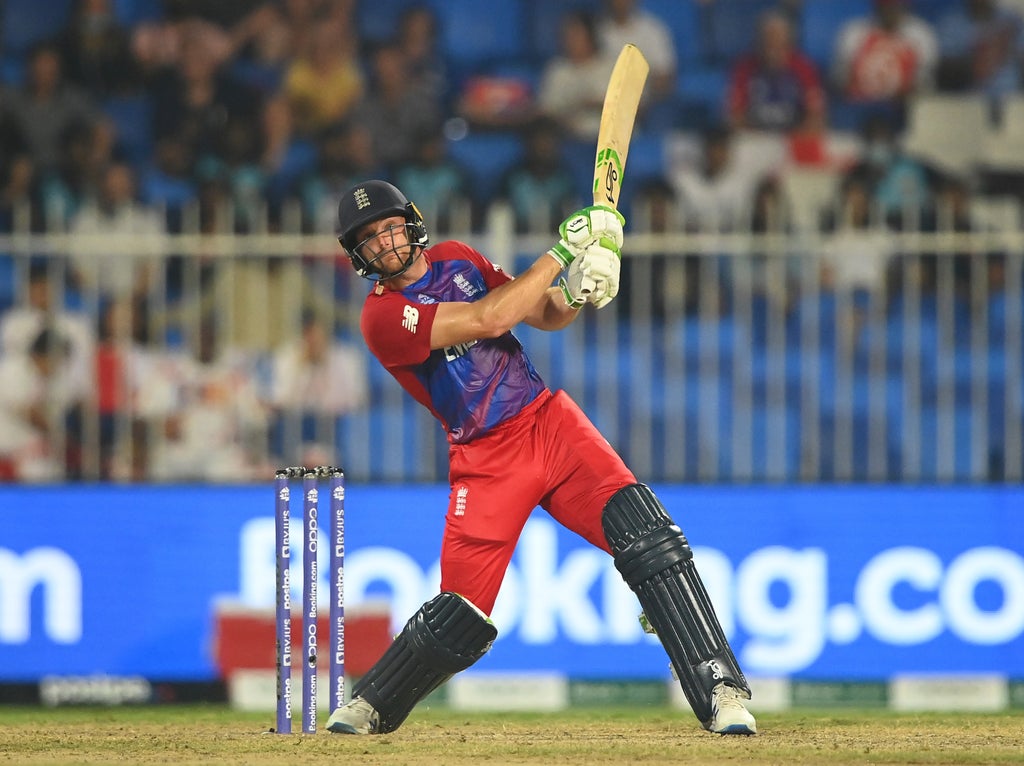 It is rare such a complete Twenty20 performance has one standout hero. But as England picked up their fourth and most compelling victory of this World Cup, beating Sri Lanka by 26 runs having been 35 for three and made to fret in the second innings as they contended with dew, they triumphed because of a(nother) white ball masterclass from Jos Buttler.

England’s own limited overs phenom underlined his credentials as the best T20 batter in the world with a ridiculous 101 not out. Ridiculous because he had just 24 from his first 30 having opened the batting. Ridiculous because he then went on to smoke 77 from the last 37. Absurd, too, given this was his first century in internationals, and second in all T20. As it happens, five of his nine hundreds in 50-over cricket have come from fewer deliveries. England would not have got anywhere near their total of 163 for four without him.

Not content with becoming the first Englishman to register three figures in all three formats, he then affected a game-changing run out to dismiss Sri Lanka captain Dusan Shanaka (26), who had brought his side back into the match. A partnership of 53 with Wanindu Hasaranga (34) gave hope of a positive response after defeats to Australia and South Africa.

That fightback coincided with injury to Tymal Mills, who pulled up midway through his second over with a quad injury and left Eoin Morgan a bowler light. But the skipper, who had returned to some semblance of form with 40, put faith in this rest of his bowlers and got crafty with his fields. All held their nerve to maintain England’s 100 per cent record with an over to spare.

Buttler’s was one of those rare T20 knocks that was put in context in real-time. England were reduced to 35 for three in the sixth over, struggling to come to terms with the lack of bounce on a Sharjah pitch they had not played on before. The main architect of their destruction was leg spinner Hasaranga, who rattled Jason Roy’s off stump and then fooled Jonny Bairstow with a googly to trap him LBW on review for a first-ball duck. Dawid Malan (eight) lost his off stump to Dushmantha Chameera in between.

At the 10 over stage, England had limped to 47 for three: Morgan threatening to stink out the joint with six from 15, while Jos had been subdued. For a moment, as they stumbled through batting first for the first time in this tournament, their aura of invincibility started to dim.

Not for long, though. Just 4.3 overs later, the score had been doubled. Buttler found 13 from the 13th over – which included hitting the first six of the innings – then Morgan found his touch with a charging six over extra cover to start off a Lahiru Kumara over that went for 22. The England captain struck a couple more sixes to get to 40 before he was bowled going for a fourth to give Hasaranga his 50th dismissal in the format. With the score now 147 for three with 10 balls to go, it wasn’t quite a silver lining, even if the 24-year-old became the fifth-fastest male bowler to the tally.

Buttler started the final over on 87, moving to 93 off the first two deliveries. Fortune came with the next as he top-edged high to backward square leg. Pathum Nissanka sprinted and made up the ground but could not complete the catch. Buttler scampered a couple to 95, only to play two dot balls. Luckily for him, Chameera generously offered up a leg side full toss which he helped over the fence for three figures to sign off the innings.

Things didn’t get much better for Sri Lanka or Nissanka as the opener was run out three balls into the chase: the Morgan-Buttler partnership continuing on the field following their stand of 112. Charith Asalanka then came speeding out of the blocks, charging Chris Woakes and Moeen Ali for a four and six, then four and four, respectively. Repeating the trick against Adil Rashid did not go well as he was caught in the off side by Moeen. The leggie also bagged Kusal Perera in the sixth over.

As it happens, Sri Lanka’s 40 for three was the superior of the two Power Plays (England’s managed 36 for three). But the Buttler effect meant they needed to keep swinging, with no regard. Avishka Fernando did so across the line and was trapped LBW to Chris Jordan.

Bhanuka Rajapaksa (26) found joy, particularly against Chris Woakes, who shelled him on 13 and then served him two consecutive “hit me” balls that went into the stands at deep midwicket then racing over the sponge at long off. But the allrounder had the final say when the left-hander tried to go high down the ground immediately after, caught low by Jason Roy running in from the boundary.

However, as the chase threatened to get beyond Sri Lanka’s reach, the 14th over presented itself as a turning point. Hasaranga’s six and Shanaka’s four meant Mills had conceded 12 from three legitimate deliveries. The left-arm quick then pulled up for his next delivery.

Woakes completed the over, conceding just two from the final three deliveries but thus ruling out of bowling the two full overs he had left up his sleeve. Morgan was therefore an over short and had to rejig his pack with Sri Lanka needed 61 from the last six overs.

That became 41 from the final four after Livingstone and Jordan were taken for 10 each. Alas for Sri Lanka, the jeopardy they had created was snuffed out in the space of four balls. Hasaranga (34) charged Livingstone but could only find Roy’s hands down the ground, who offloaded to Billings. Then Shanaka’s hesitancy after dabbing behind point allowed Buttler to take aim and fire at the stumps.

With only the tail left to find the remaining 34 from 16, England’s bowlers made light work of closing this one out. Moeen took two of the last three to finish with two for 15, while Jordan took two for 24.

And England put down another marker at this T20 World Cup, with just South Africa to come in their final Super 12 match on Saturday. Sri Lanka, meanwhile, need results to go for them elsewhere to keep their semi-final hopes alive.